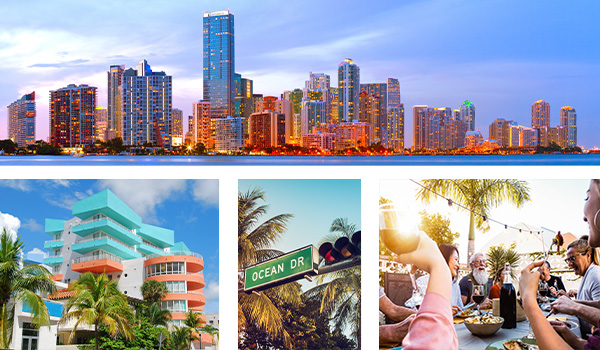 The IBA 2022 Annual Conference will be held in Miami, a major US centre and leading city for finance, commerce, culture, entertainment and international trade.

The Port of Miami is the world’s busiest cruise port and many of the world’s leading cruise companies have offices in or around this area including Carnival Cruise Line, Norwegian Cruise Line, Royal Caribbean International and Celebrity Cruises.

Tourist attractions include: South Beach – the most iconic neighbourhood in greater Miami, known for its beach, boutiques, bars and restaurants; the art deco historic district – containing 800 deco buildings listed on the National Register of Historic Buildings; and the Everglades National Park – 1.5 million acres of swampland, a short drive away from Miami, that is home to alligators, crocodiles, snakes and all kinds of birds.

With an abundance of business and networking opportunities on offer, this modern metropolis will be a fantastic location for the largest, most prestigious event for international lawyers. The most iconic neighbourhood in Greater Miami, South Beach (SoBe) is a vertiginous landscape of sparkling beach, beautiful art-deco architecture, high-end boutiques and buzzing bars and restaurants. South Beach has its glamour, but there is more to this district than just velvet ropes and high-priced lodging. You will find some great down-to-earth bars, good ethnic eating, and excellent museums. The world-famous art-deco district of Miami Beach is pure exuberance: an architecture of bold lines, whimsical tropical motifs and a colour palette that evokes all the beauty of the Miami landscape. Among the 800 deco buildings listed on the National Register of Historic Buildings, each design is different, and it is hard not to be captivated when strolling among these restored beauties from a bygone era. Everglades National Park, just a short drive from Miami, protects one of Florida's most unique natural features. These swamplands, covering about 1.5 million acres, are home to alligators, crocodiles, snakes, and all kinds of birds. One of the most enjoyable ways for tourists to experience the Everglades is on an airboat tour.

Getting to and from the airport