A Congressional House Select Committee is investigating the attack on the US Capitol last January. Global Insight assesses what these hearings mean for the legacy of former President Donald Trump – and for the future of US democracy.

When rioters stormed the US Capitol Building on 6 January 2021, the rest of the US watched live. At the time, the violence and its threat to US democracy seemed indisputable, and it was condemned across political lines.

But the attack has since become a point of contention, dismissed by some as ‘legitimate public discourse’.

Now, the bipartisan Congressional committee investigating the insurrection – named the US House Select Committee on the January 6 Attack – is attempting to correct the record, presenting its preliminary findings through public, televised hearings.

At the first hearing, the Committee played previously unseen footage charting the course of the insurrection, extending from the moment rioters arrived, to their successful occupation of the Capitol.

It’s difficult to say whether the Committee can convince those who matter most: the public who saw the insurrection with their own eyes and still support Trump

It’s a harrowing watch, showing rioters using flagpoles sporting the US flag to viciously beat police officers. The sound of the roaring crowd within and beyond the Capitol’s walls is deafening, but chants of ‘our house’ and ‘hang [then US Vice-President] Mike Pence’ are distinguishable, as is an eerily melodic chant of House of Representatives Speaker Nancy Pelosi’s name. ‘We’re coming in if you don’t bring her out’, one rioter yells at a security officer guarding the House floor.

No elected officials were ultimately physically harmed. But the Committee has highlighted how close the rioters came to them, including their narrow avoidance of Pence by less than a minute.

Despite the attention to such details, the Committee’s scope is broad. The culmination of its initial investigation, involving more than a thousand private hearings and 140,000 documents, reaches back before the insurrection to what the Committee’s Chairman, Representative Bennie Thompson, terms a ‘sprawling, multi-step conspiracy’ to overturn the election.

In his opening remarks, Thompson laid out the charge: ‘January 6 was the culmination of an attempted coup’.

Representative Liz Cheney, Vice-Chair of the Committee and a Republican, alleged that ‘over multiple months, [former US President] Donald Trump oversaw and coordinated a sophisticated seven-part plan to overturn the presidential election and prevent the transfer of presidential power’.

Throughout June and July, the Committee has been delving cog-by-cog into this plan’s mechanics: the failed litigation over electoral fraud claims following the 2020 presidential election, plans to replace the Attorney-General with intent that the Department of Justice would spread those claims, and the misleading of donors. It's examining allegations of Trump’s efforts to pressure Pence publicly and privately, which a federal judge concluded was likely to have violated two federal criminal statutes, and of the pressure placed on election officials, notably to transmit false electoral slates to Congress. Finally, it's investigating Trump’s conduct on 6 January itself.

The Committee is attempting to prove that Trump knew he had lost the election. That multiple aides told him the fraud claims were baseless. That he still obsessively pursued those claims, which ultimately led to the insurrection itself. And that he did nothing to prevent the attack, even when the threat to his own Vice-President was clear.

Material evidence has provided insights into what the Trump administration should have known about rioters’ plans, and when. A US Capitol Police assessment from 3 January, for example, acknowledged that ‘Congress itself is the target on the 6th’.

And a 4 January email, from the National Security Division of the Department for Justice to Acting Deputy Attorney General Richard Donoghue, identified Trump supporters apparently planning to ‘occupy federal buildings’ and ‘invad[e] the Capitol Building’.

Donoghue testified, ‘We knew that if you have tens of thousands of very upset people showing up in Washington, DC, that there was potential for violence.’

Cheney argued that ‘much of this information about the potential for violence was known or learned before the onset of the violence. Early enough for President Trump to take steps to prevent it.’

‘He could, for example, have urged the crowd at the Ellipse [rally] not to march to the Capitol’, she continued. ‘He could have condemned the violence immediately once it began. Or he could have taken multiple other steps. But, as we will see today and in later hearings, President Trump had something else in mind.’

Hutchinson claims that on 6 January, Trump was told his supporters were armed and that some were declining to enter his rally area because they’d have to give up their weapons and they wanted to march to the Capitol with them.

In response, Hutchinson alleges, Trump wanted the screening machines (or ‘mags’) turned off to allow supporters to enter without relinquishing weapons. She told the Committee: ‘I overheard the president say something to the effect of: “I don’t f-ing care that they have weapons, they’re not here to hurt me. Take the f-ing mags away. Let my people in, they can march the Capitol from here”.’

She further alleges he wanted to march with them.

A National Security Council chat log shows officials attempting to find a route to the Capitol for Trump at 1230. But, shortly after the Capitol Police report multiple breaches, a message at 1320 notes that he’s going to the White House instead.

But Hutchinson claims it wasn’t Trump who reconsidered. She says Trump’s Deputy Chief of Staff for Operations, Anthony Ornato, relayed this description of Trump’s actions when his head of security, Robert Engel, wouldn’t drive him to the Capitol: 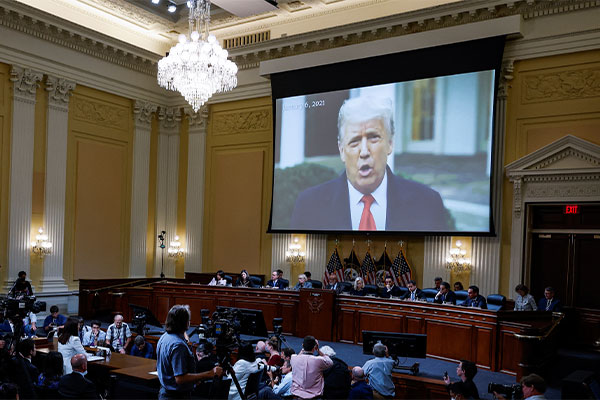 A video of former US President Donald Trump is played as Cassidy Hutchinson, who was an aide to former White House Chief of Staff Mark Meadows during the Trump administration, testifies during a House Select Committee public hearing that investigates the January 6 attack on the US Capitol, at the Capitol, in Washington, DC, 28 June 2022. Anna Moneymaker/Pool via REUTERS

‘The president said something to the effect of: “I’m the f-ing president, take me up to the Capitol now”. To which Bobby [Robert Engel] responded, “Sir, we have to go back to the West Wing.” The president reached up towards the front of the vehicle to grab at the steering wheel. Mr Engel grabbed his arm, said “Sir, you need to take your hand off the steering wheel, we’re going back to the West Wing. We’re not going to the Capitol.” Mr Trump then used his free hand to lunge towards Bobby Engel, and when Mr Ornato recounted this story to me, he had motioned towards his clavicles.’

She claims Engel didn’t correct Ornato during this recounting. However, the New York Times was anonymously told that Engel would go under oath to refute this account, and Trump has denied the story.

Back at the White House, officials allegedly became increasingly concerned about the mob, but Hutchinson claims Trump didn’t want to act.

In fact, at 1424, Trump sent out a tweet condemning not the mob, but Pence, for not obstructing Congress’s vote certification.

The timing is striking. Capitol Police had been overwhelmed an hour before. A riot was declared by 1350. The rioters had breached the building by 1412, almost catching sight of Pence.

Hutchinson says Trump knew the mob threatened Pence, but she claims to have heard Meadows tell Pat Cipollone, White House counsel to Trump, ‘You heard him Pat, he thinks Mike deserves it. He doesn’t think they’re doing anything wrong.’

At 1438, Trump tweeted: ‘Please support our Capitol Police and Law Enforcement. They are truly on the side of our Country. Stay peaceful!’

But he didn’t tell rioters to leave. Multiple officials begged Trump to do more, privately and publicly. In a video tweeted to Trump at 1511, Representative Mike Gallagher says, ‘you are the only person who can call this off’. Cabinet members apparently considered removing Trump from office using the 25th Amendment.

Only at 1617 did Trump tell rioters, in a recorded video address: ‘We have to have peace. So go home. We love you, you’re very special. You’ve seen what happens, you’ve seen the way others are treated that are so bad and so evil. I know how you feel. But go home and go home in peace.’

Public speculation about the likelihood of Trump being held accountable for the violence has been rife since the Capitol attack.

On 6 January, Hutchinson claims, Cipollone ‘said something to the effect of: “Please make sure we don’t go up to the Capitol […] We’re going to get charged with every crime imaginable if we make that movement happen.’

It didn’t happen. But Trump could face accountability as an instigator.

A federal judge ruled that civil lawsuits holding Trump liable for the violence could go to trial, arguing Trump ‘should have known’ his supporters would take his speech as ‘a call to action’.

Trump released a 12-page statement in mid-June, in which he rebuts the charges against him and says that ‘Democrats created the narrative of January 6th to detract from the much larger and more important truth that the 2020 election was rigged and stolen’, though there is no evidence to support that the election was either of those things. In July 2021, he denied in a post on his own website any involvement in a ‘coup’.

But the Committee must also seek another form of accountability: convincing the Republican party and public to reject Trump.

The hearings have focused on testimony from Trump’s own allies and enablers, but plenty of Republicans still stand by Trump. Some are using his rhetoric to campaign for the mid-term Congressional elections, to be held in the autumn of 2022.

The Committee argues that the ‘conspiracy’ to thwart democracy ‘is not over’. Even a former member of the militia group the Oath Keepers testified that if Trump could ‘whip up a civil war [...] what else is he going to do if he gets elected again?’

It’s difficult to say whether the Committee can convince those who matter most: the public who saw the insurrection with their own eyes and still support Trump, and those who besieged the Capitol and perhaps would do so again. As Thompson has pointed out, Trump and his followers have adopted the words, ‘do you believe me, or your lying eyes?’

Jennifer Venis is a freelance journalist and can be contacted at jennifer@jennifervenis.co.uk

Top image: An explosion caused by a police munition is seen while supporters of former US President Donald Trump riot in front of the US Capitol Building in Washington, DC, 6 January 2021. REUTERS/Leah Millis