With Liang Ding from DeHeng Law Offices serving as the moderator, the International Bar Association (IBA) invited four prestigious experts from different jurisdictions with extensive experience in the field of antitrust compliance to participate in the webinar: Janet Hui, Elizabeth Xiao-Ru Wang, Kenji Ito and Natalie Yeung. This was the last part of a three-part webinar series. The registrant number was around 400 and 149 attendees joined the webinar live.

The speakers first provided an introduction to the development of antitrust issues in the digital economy in each jurisdiction and envisioned possible upcoming legislative developments. Janet Hui introduced when and how antitrust issues relating to the digital economy emerged in China, and the legislative enforcement status in the past few years, envisioning that antitrust issues will be the focus of regulation for digital platform companies, especially those with particularly significant amounts of data. Based on her experience, Natalie Yeung stated that the Hong Kong competition authority has newly issued a statement setting out the digital economy as one of its enforcement priorities. Then, she provided a brief introduction to the status of three topics in the European Union: the law on self-preferencing, data and the Digital Market Act. Kenji Ito introduced legal framework changes made by the Japanese competition authority and enforcement practices aimed at big platform companies. Last, from the economic perspective, Wang explained why the unique features of the digital economy make competitive analysis more challenging: this is predominately because of huge data, the platform business model and rapid innovation.

The panel then discussed abuse of dominance in the digital economy from their own perspectives. Yeung talked about three high-profile investigation cases in the EU: Amazon for its alleged abuse of data, Apple for its alleged exclusionary billing system and Google for its online advertising. Regarding the Apple case, because the same behaviour has also been investigated in Japan, Ito added that the Japanese competition authority has settled with Apple on this matter, but no one can say for sure whether there will be follow-up actions. Ito also addressed 'abuse of a superior position', which is a term unique to Japan, where it is still unclear how it should be applied to the digital economy area. Wang believes, from the economic analysis perspective, that even though there is new conduct involved in the digital economy, the traditional economic framework can still be used, and she considered the analysis of a vertically integrated company and self-preferencing as examples. Hui mentioned that, in China, big data discrimination and exclusive dealing, especially 'choose one from two', are hot topics. Because the Chinese competition authority has made several decisions against big platforms, Hui asked Ding a question about whether there will be follow-up litigation against big platforms. Ding believed that such companies are unlikely to bring suits against the authority because all evidence collected in the process of an antitrust investigation is kept confidential, and it would be very difficult for a party to file a follow-up lawsuit without sufficient evidence.

Finally, considering the practice in their jurisdictions, the speakers attempted to discuss killer acquisitions, which is a newly emerged concept related to the digital economy. Wang described it as a new phenomenon that may damage innovation and future competition, and the issue is how to identify a killer acquisition that has an anti-competitive effect. Ito highlighted that the Japanese enforcement authority has changed guidelines to capture this type acquisition, but there has been no actual case so far. Hui added that the same situation exists in China regarding killer acquisitions. Finally, Yeung mentioned that, in the United Kingdom, many killer acquisitions have already been identified, and some have even been prohibited. 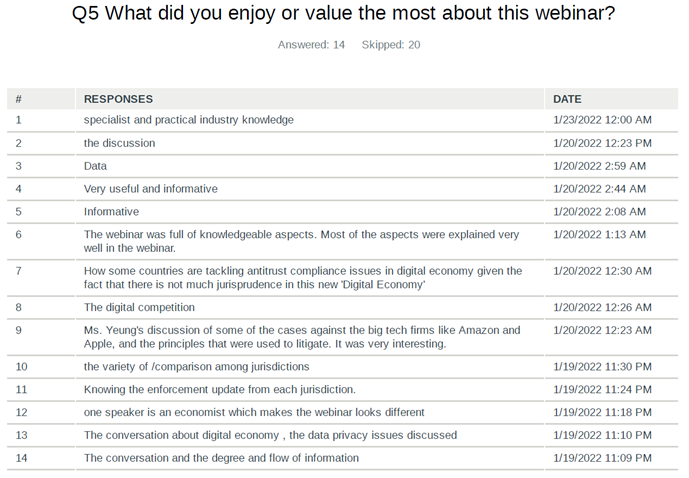