In a ceremony dating back centuries, Sternford Moyo, President of the International Bar Association (IBA), has been bestowed with the Freedom of the City of London for his unswerving commitment to the rule of law and contributions to the international legal profession in general. Mr Moyo was formally admitted as a Freeman of the City of London on 28 September 2022 at Chamberlain’s Court in London, United Kingdom.

Sir David Wootton, former Lord Mayor of the City of London, who nominated Mr Moyo for the Freedom, said: ‘It is a pleasure to welcome Sternford Moyo as a Freeman of the City of London. As the first person from the continent of Africa to be elected President of the IBA, he has already contributed so much to the international legal sector, and his commitment to the rule of law is something very much shared by the City of London.’ 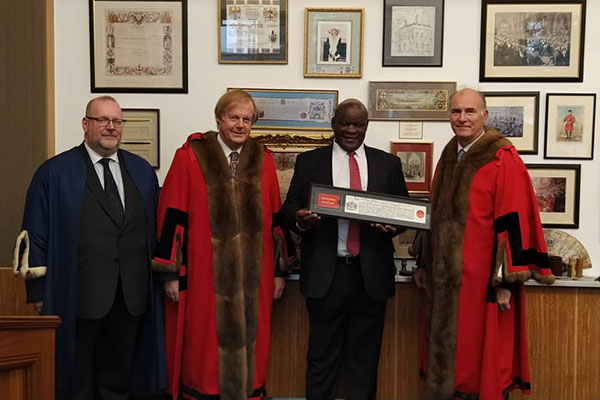 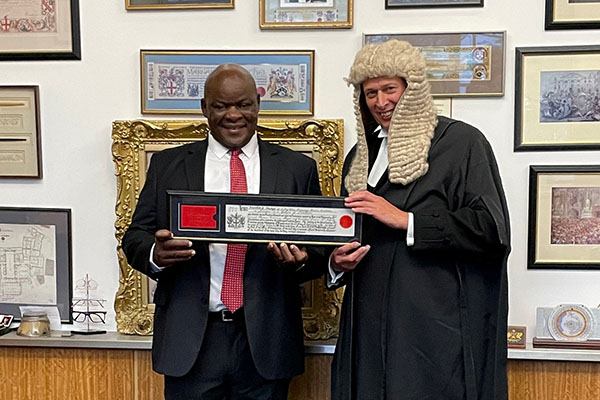 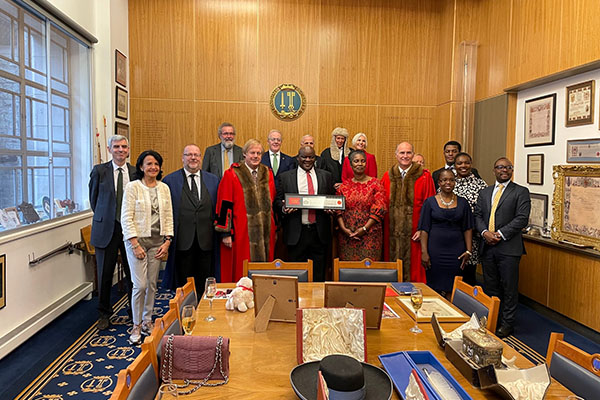 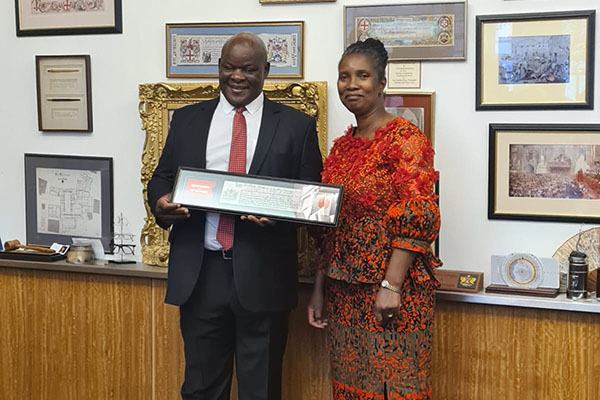 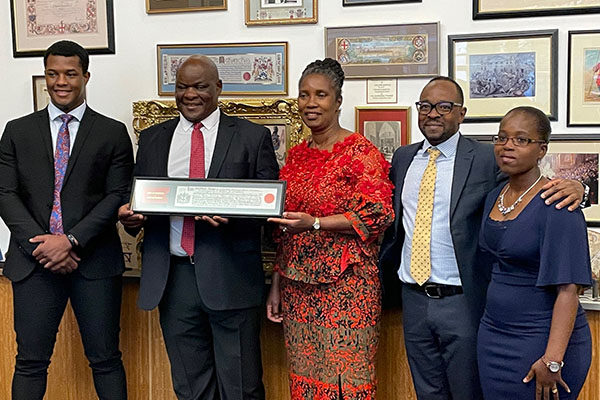 The ceremony, presided over by the Remembrancer of the City of London, Paul Double, was followed by a dinner that included Mr Moyo’s close family, friends, colleagues and distinguished guests from the City of London. During the meal Mr Moyo expressed condolences on the loss of Queen Elizabeth II and wished the King, the Lord Mayor, the City and its officers prosperity. He expressed deep gratitude and appreciation for being recognised with the honour and compared the significance of the day to the day his wife agreed to marry him.

President Moyo further remarked: ‘It is a great honour to receive from the London City Corporation this Freedom. In fact, it has been one of the most special events of my life. I regard London as my second home, and the International Bar Association has strong roots in England’s capital city. I want to thank the City of London, the IBA and the Law Society of England and Wales for their support, and Alderman Sir David Wootton for nominating me for this prestigious award.’

Mr Moyo continued: ‘It has been my good fortune to have met, and to be, working alongside such incredible colleagues as the IBA Officers here today, including Mark Ellis, who I have worked with now for more than twenty years following our first meeting in Harare where we discussed the rule of law, administration of justice and the independence of the judiciary in Zimbabwe. I could not have conceived two decades ago that today I would have the good fortune of being seated in this remarkable city, with my family and fellow upholders of the rule of law the recipient of such an accolade.’

IBA Executive Director Dr Mark Ellis commented: ‘On behalf of the entire International Bar Association, I congratulate Sternford on being honoured with the Freedom. The recognition is well-deserved for how he places the rule of law front and centre of all that he does. He became President of the IBA in January 2021 in the midst of the COVID-19 pandemic. It was a challenging time for all but, as always, Sternford would not be deterred from furthering the message of the importance of human rights and the rule of law, needed more at that time because of governments clamping down on citizens’ freedoms. The London City Corporation tribute is fitting recognition of Sternford’s dedication, even in a trying environment, to upholding the values of the legal profession that in turn uphold democracy.’

The ceremony, which is said to be one of the oldest surviving traditional ceremonies still in existence today in London, is believed to have been first presented in 1237. In attendance at the ceremony with Mr Moyo were senior representatives of The Law Society of England and Wales Stephen Denyer and Christina Blacklaws, and representing the IBA, Executive Director Mark Ellis, the IBA’s Human Rights Institute’s Co-Chair Anne Ramberg, a past chair of the Legal Practice Division Michael Greene and Hon Life Member Keith Baker. Among other notable figures in attendance were Charles Edward Lord OBE JP, Chair of Civic Affairs in the City of London leading on workforce and inclusion policy, and Bronek Masojada, Alderman and former chief executive officer of Hiscox.

Mr Moyo, who is Chairman and Senior Partner of law firm Scanlen & Holderness in Zimbabwe, is the first IBA President of African descent in the 75-year history of the organisation and has held many senior roles before ascending to the presidency, including being a trustee of the IBA-established entities Southern Africa Litigation Centre and eyeWitness to Atrocities. He is no stranger to London, with his firm engaged in cross-border work.

Mr Denyer, Director of Strategic Relationships at The Law Society of England and Wales, said: ‘Sternford Moyo is the first President of the International Bar Association from outside the United Kingdom to be granted the Freedom of the City of London. The Law Society of England and Wales has a close relationship with Sternford stretching back decades and we are delighted to have been able to support his receiving this honour.’ 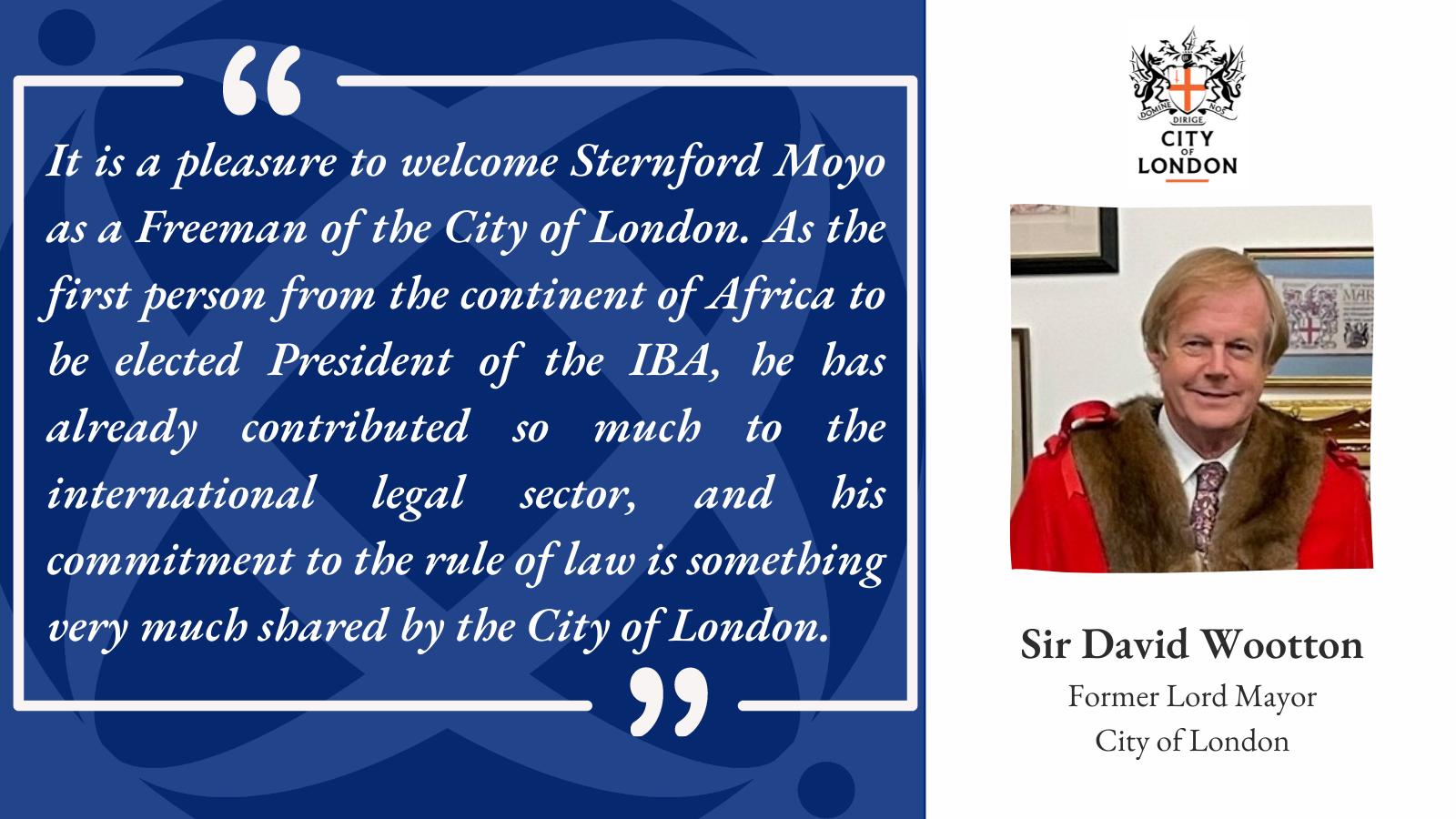 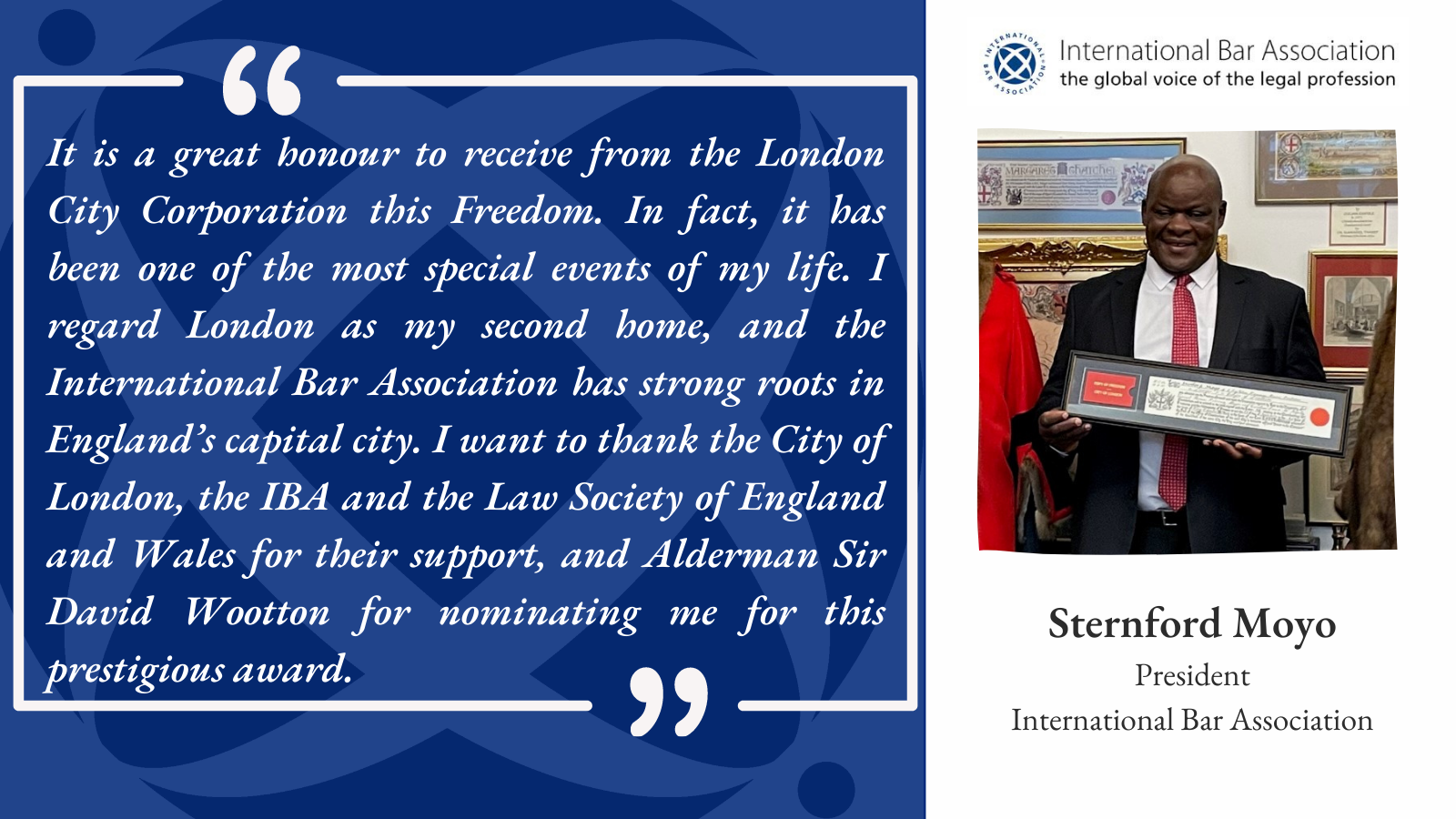 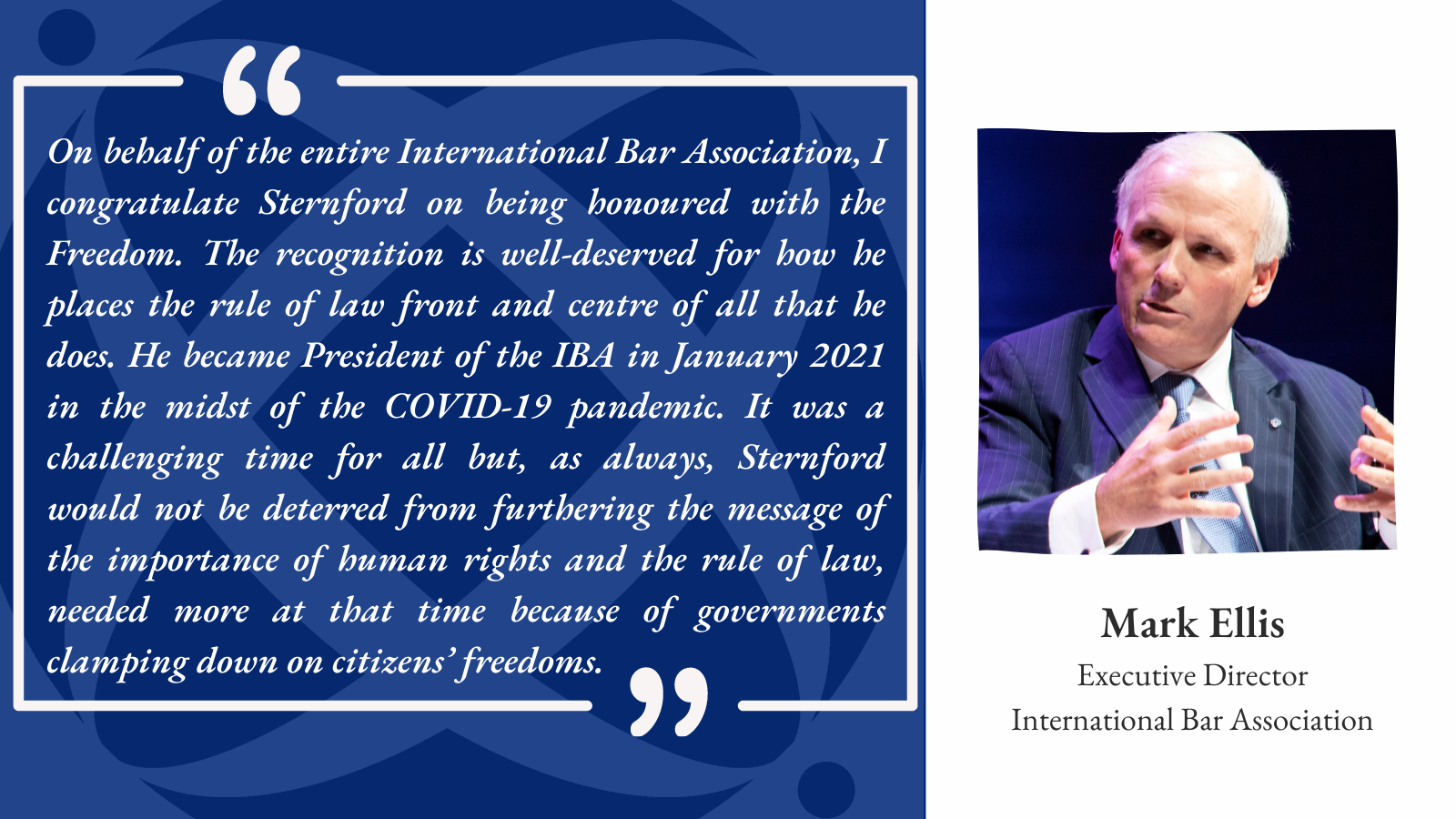 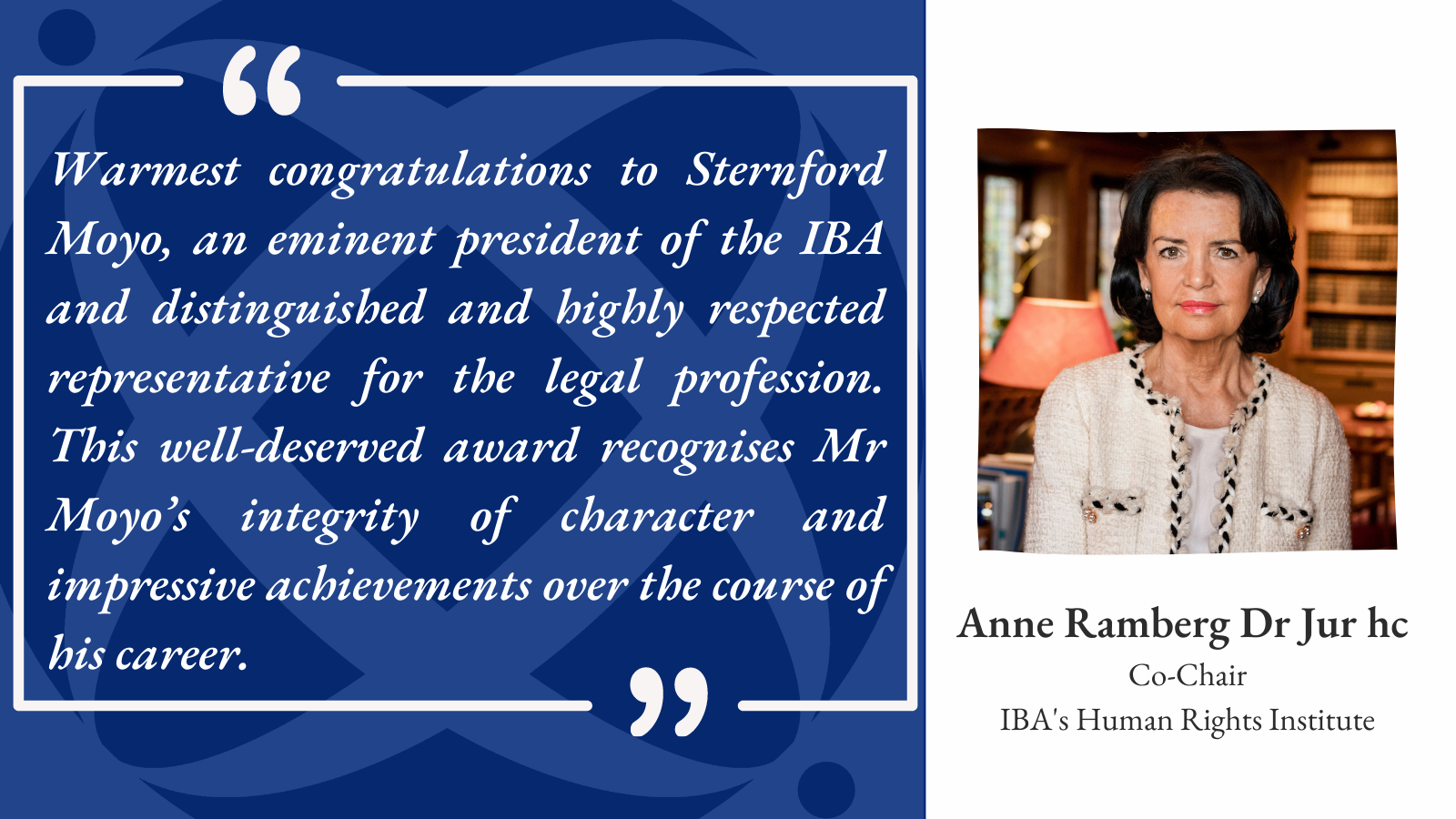 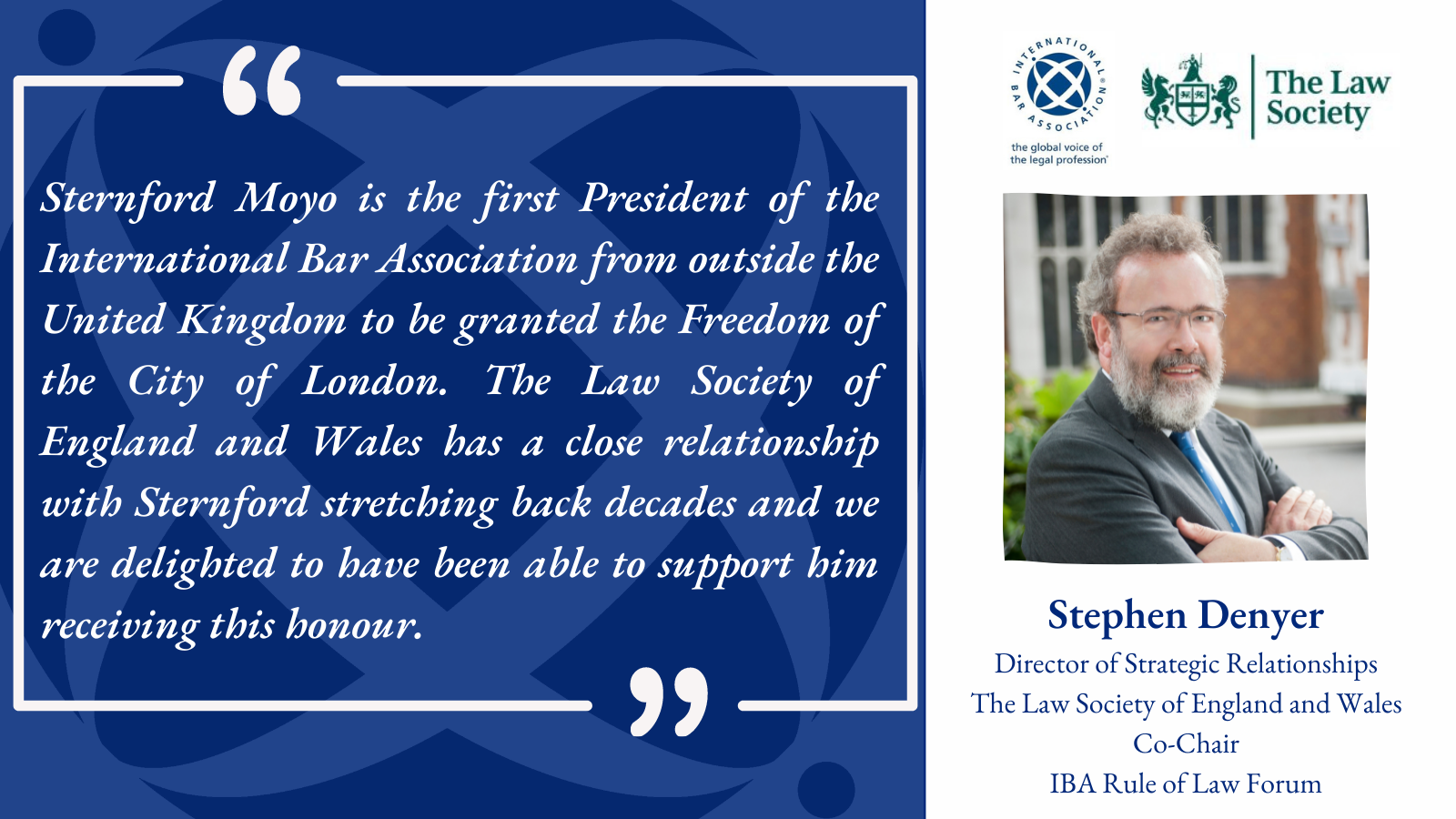