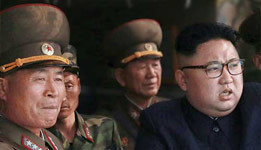 Tensions over North Korea’s nuclear weapons programme escalated after a missile test in May 2017 signalled its advancing technology, followed by the country launching its first intercontinental ballistic missile in July. The United Nations Security Council expanded its sanctions against North Korea in early August 2017.

In this podcast, Michael Kirby – Vice Chair of the IBA Human Rights Institute Council – warns that international law and diplomacy is now at a critical juncture.

Kirby chaired the UN Commission of Inquiry that found clear evidence of ongoing crimes against humanity in North Korea when it reported in 2014. Here, he considers the precarious security situation as Supreme Leader Kim Jong Un and his elite seek to enhance North Korea’s nuclear capabilities, and the extreme difficulties of bringing accountability for grave human rights violations at a time of heightened nuclear tensions.