The UK’s referendum on EU membership took place more than six years ago, but the saga surrounding the country’s exit from the union shows no sign of waning.

After months of tensions between London and Brussels, on 13 June the UK government proposed a bill to override key aspects of the Northern Ireland Protocol.

Initially brokered between the European Commission and UK Prime Minister Boris Johnson in 2019 and later ratified by the UK parliament, the Protocol was designed to provide unfettered access for Northern Irish goods to Great Britain. Crucially, it also avoided creating a hard land border between Northern Ireland and the Republic of Ireland that threatened to stoke sectarian tensions and jeopardise the relative peace and security enjoyed on the island since the 1998 Good Friday Agreement.

However, the Protocol has already had deeply undesirable consequences for trade across the British Isles. Since coming into force in January 2021, it has increased checks on goods moving between Great Britain and Northern Ireland considerably, disrupted trade and resulted in significant costs, red tape and delays for businesses.

The UK government first sparked controversy over the Protocol in March 2021 when it unilaterally delayed the introduction of a border across the Irish Sea for trading food, parcels and pets by three months, prompting the EU to launch legal action. The UK claimed the grace period would be ‘temporary’, but by June it had already called on the EU to extend the six-month grace period for fresh meats. The EU agreed and granted a further three-month extension.

Negotiations continued. By October, in a bid to break the deadlock, the EU proposed several measures to reduce the burden of customs checks and controls between Great Britain and Northern Ireland. In April 2022, it additionally approved changes to EU law to ensure the continued supply of medicines from Great Britain to Northern Ireland without the need to revise fundamental aspects of the Protocol.

This was not enough for the UK government, which, apart from wanting to reduce the Protocol’s trade burden on the UK, was still intent on removing the jurisdiction of the Court of Justice of the European Union (CJEU) over trade disputes related to the Protocol.

The UK government insists that its proposals – which include stripping the CJEU of its oversight role and creating a dual regulatory regime that would lead to fewer custom checks for goods moving between Great Britain and Northern Ireland – comply with international law under the ‘doctrine of necessity’. This little-known legal principle permits states facing ‘grave and imminent peril’ to set aside their obligations under treaties under ‘certain, very exceptional, limited conditions’.

However, the EU has already branded the move ‘illegal’ and reinitiated legal proceedings against the UK in June, arguing that the proposals violate international law. Maroš Šefčovič , Vice-President of the European Commission, said: ‘Let there be no doubt: there is no legal nor political justification whatsoever for unilaterally changing an international agreement. Opening the door to unilaterally changing an international agreement is a breach of international law as well.’ By the end of July, the EU had launched a further four cases against the UK, adding to the three infringement procedures already heading to the European Court of Justice.

The decision has also been deeply criticised across the UK legal community. The government's own former legal adviser, Jonathan Jones QC, described its arguments for overriding the Protocol as ‘completely unpersuasive’.

Sir David Anderson QC, an expert in EU law and barrister at Brick Court Chambers in London, also remains unconvinced by the proposals. ‘The government has not taken the unilateral safeguard measures provided for by Article 16 of the Protocol and has not showed any urgency in putting its bill through parliament’, he says. ‘This is an unpromising basis on which to argue that the demanding threshold of “grave and imminent peril” has been reached.’

Anderson, who is also a crossbench working peer in the House of Lords, says the government’s actions have already undermined the UK’s global reputation as a nation committed to upholding international law and internationally recognised standards. ‘Threats to resile from clear treaty commitments are immensely damaging to the UK’s international credibility’, he says. ‘I hope and expect that the House of Lords, whose consent remains necessary for the bill to become law, will simply refuse to be complicit in this stratagem.’

The EU’s response to the UK’s latest exploits was inevitable, says Yves Melin, a partner at Reed Smith in Brussels and Secretary-Treasurer of the IBA International Trade and Customs Law Committee. ‘The EU is going to react if the UK proceeds with this’, he told Global Insight. ‘It has already reacted in the form of infringement proceedings. These are just legal proceedings before the Court of Justice today. Someday there may be a ruling against the UK with financial consequences. Then the EU may want to remove some, probably not all, but some of the concessions it made in the Trade and Cooperation Agreement. I don’t think this would be against Northern Ireland’s interests because no one wants to stoke or raise tensions in Northern Ireland.’

Recent research suggests the adverse economic impact of Brexit has been felt least in Northern Ireland compared with other parts of the UK. This has been attributed, in part, to the Protocol’s existing trading framework. However, the corrosive effect of the ongoing tensions surrounding the existing arrangements has been all too apparent in Northern Irish politics. 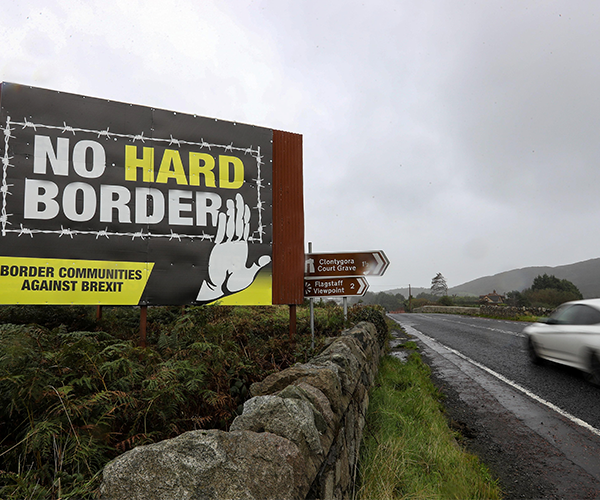 View of the border crossing between the Republic of Ireland and Northern Ireland outside Newry, 1 October 2019. REUTERS/Lorraine O'Sullivan

Following Givan’s resignation, the Northern Ireland Assembly at Stormont collapsed and local elections were brought forward to early May. The DUP said it would block the election of ministers until the Protocol was revised, reigniting concerns that the party was holding Westminster to ransom over Brexit.

A letter penned by Northern Ireland’s government renounced Westminster’s moves to unilaterally change the Protocol, arguing that it ‘flies in the face of the expressed wishes of not just most businesses but most people in Northern Ireland’.

Melin says the UK’s bill, if passed, could unleash a full-blown EU–UK trade war. ‘A trade war is the unpredictable imposition of high duties against imports from a third country’, he says. ‘Could we see duties imposed by the EU against UK products in retaliation for what's happening now? Definitely, yes. Targeted duties are meant to hurt and we could enter into a trade war whereby the UK does the same thing.’

In early July, word of the Prime Minister’s imminent departure from Downing Street was met with optimism in Dublin and Brussels. Johnson, who once trivialised the issue of the Irish border by comparing it to moving between the London boroughs of Camden and Westminster, has continually undermined and underestimated the complex challenges of post-Brexit trade for Northern Ireland, the only part of the UK that shares a land border with the EU. Sadly, once again, internal politics look likely to derail any impetus in Westminster to help get Stormont up and running again.

In mid-July, MPs rejected calls from the opposition and two of Northern Ireland’s political parties to amend the bill. On 20 July, the bill cleared the House of Commons at its third reading, paving the way for its passage to the House of Lords. As parliament adjourns for the summer recess, the professed ‘grave and imminent peril’ threatened by the Protocol may be quickly forgotten as this and so many other bills are stymied as the hunt for Johnson’s successor continues.

But the efforts by his government to ride roughshod over international law will leave a lasting imprint on Belfast, Dublin and Brussels. Following Johnson’s resignation, Michel Barnier, who led the EU’s negotiating team, tweeted that his departure opened ‘a new page in relations with the UK’. A reset – both for the safeguarding of EU–UK relations and the rule of law – is sorely needed.

Ruth Green is the IBA Multimedia Journalist and can be contacted at ruth.green@int-bar.org