The International Bar Association (IBA) has announced the publication of a new report by the  International Legal Assistance Consortium (ILAC) that documents the impact of the five-month Russia-Ukraine conflict on the Ukrainian justice system. As a founding organisation of ILAC, the IBA contributed to the report’s research, which surveys, region-by-region, the practical impact of the war on the judiciary, lawyers, law students and prosecution.

The report, Under Assault: A Status Report on the Ukrainian Justice System in Wartime, also surveys, by jurisdiction, the physical damage to courthouses and other infrastructure, and the steps taken by Ukrainian officials to transfer courts and judges out of conflict and Russian-occupied zones.

ILAC President, and IBA Executive Director, Dr Mark Ellis, said: ‘By comparing what existed before Russia’s war to what exists now, we begin to realise the magnitude of the war’s impact on Ukraine’s justice system. Infrastructure can be repaired, but justice is about so much more than buildings. ILAC’s timely and thorough status report demonstrates how Ukraine’s justice system is adapting in wartime and the incredible investment it will take from the national government and international community to rebuild once there is peace.’

The Report’s Author, and Former ILAC President, William D Meyer, stated: ‘The conflict continues to evolve in Ukraine and some of the material in this report will become outdated. But uncertainty should not lead to inaction. What we found is that Ukraine’s justice system was far from perfect before the war, and the war will only compound shortcomings in anti-corruption efforts, judicial appointments, legal education, and the digitalisation of justice.’

Data has been compiled from dozens of individual stakeholders and Ukrainian institutions, including the High Qualification Commission for Judges, the Constitutional Court, the Supreme Court of Ukraine, the State Judicial Administration, the High Council of Justice, the Office of the Prosecutor General, the Specialized Anti-Corruption Prosecutor’s Office, the Unified Register of Attorneys of Ukraine, the Ukrainian National Bar Association, and numerous regional and local courts, prosecutors’ offices, and bar councils. 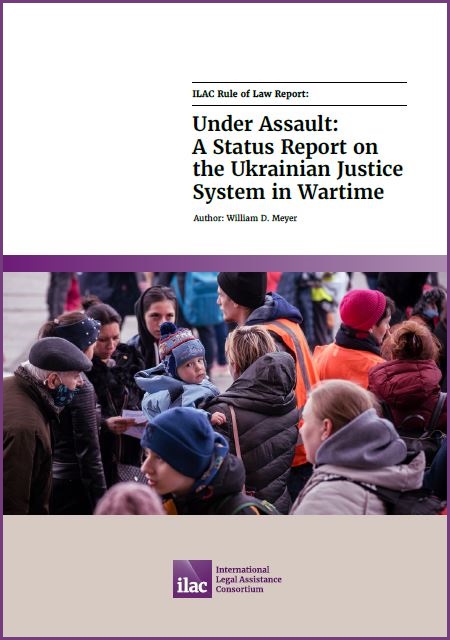 Meyer concluded: ‘Our report gives a starting point for rebuilding efforts that will have to include reconstituting the judicial and prosecutorial corps, disentangling wartime jurisdictions, and managing new caseloads peculiar to wartime offenses. ILAC will publish an update to the status report in six months.’