Back to Arab Regional Forum publications

Despite ongoing tensions in the region, M&A is up in the Middle East. It saw a massive 284 per cent rise in value year-on-year in H1 2019, although this was due in large part to a single deal, Saudi Aramco’s announced US$70.4bn acquisition of a 70 per cent stake in petrochemical firm Saudi Basic Industries ('Sabic').

Even discounting the Sabic transaction, Middle Eastern M&A enjoyed a strong H1 2019 in value terms. The total deal value was US$29.5bn, a 13 per cent increase on H1 2018, against a global background which saw a 14 per cent decline in total M&A. 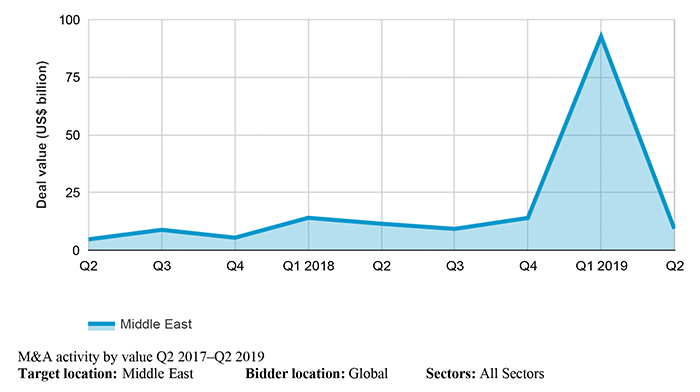 The Sabic transaction was more than an outlier, it underlined something about the current state of M&A. In line with global trends, deal volumes have been falling in the region, while average deal sizes have increased. The number of transactions in the Middle East fell 15 per cent to 112, although this was a less sharp decline than the 21 per cent global decrease.

While oil prices have largely recovered from the slump in Q4 2018, they remain too weak for many Middle Eastern states.

For example according to IMF research, Saudi Arabia requires an oil price of US$80-US$85 a barrel to balance its 2019 budget, but benchmark Brent crude has not reached US$80 a barrel since last October. Governments in the region are also aware that demand for oil is likely to decline in the long term, as governments respond to climate change by cutting fossil fuel use.

These considerations are focusing minds in Middle Eastern governments to shift economies away from reliance on upstream production of crude oil and natural gas towards other parts of the value chain, and other sectors entirely.

The Sabic deal is a case in point. It allows the buyer, Aramco, to diversify from upstream production into petrochemicals, and the seller, the state’s Public Investment Fund, to invest the proceeds in long-term diversification of the economy.

Similarly, the ADNOC deals – aside from the pipeline sale, in H1 2019 it announced the disposal of a 20 per cent share of its refining operation to Eni for US$3.3bn and another 15 per cent stake in its refining business to OMV for US$2.5bn. This will allow the company to expand oil refining and petrochemicals manufacturing. If the strategy works, it can increase profits even if crude oil demand peaks by generating revenue from a longer section of the oil and gas value chain.

Because of reorganisation initiatives such as these, the deal value in energy, mining and utilities (EMU) rose 41 per cent to US$12.7bn in H1 2019.

The low oil price has also helped sustain M&A in the financial services sector: most banks in the region rely heavily on government deposits, which have fallen as the weaker oil price has depleted cash balances. Many banks see M&A as a natural response to these pressures, since the banking sector is highly fragmented in most of the region’s countries.

As a result, the financial services sector registered a 502 per cent rise in deal value in H1 2019 to US$5.3bn on H1 2018, though the number of deals fell from eight to six. Three Abu Dhabi-based banks, Abu Dhabi Commercial, Union National and Al Hilal, in January announced plans to combine to form the third largest bank in the UAE.

In a March note, ratings agency Fitch predicted that M&A activity in Middle Eastern banking would remain ‘red hot’ in 2019. The pace has not, since then, been frenetic, but this is probably a mere matter of timing because of the pressures on banks to merge.

With the Sabic deal skewing the figures, industrials and chemicals was without question the best performing sector in the region in H1, taking up 71 per cent of deal value in the region. But looking at volume figures, a different picture emerges.

The technology, media and telecoms (TMT) sector accounted for the highest share of H1 2019 transactions by volume, at 30 per cent, with international companies showing interest in buying businesses with exposure to the Middle East’s young and often tech-savvy population. An example is Uber’s acquisition of ride-hailing app Careem in March for US$3.1bn.

Companies across major sectors such as EMU, industrials and chemicals, and financial services are acutely aware of the need to reorganise through M&A.

While a worsening of political tensions in the region, for example between Iran and the US, could reduce activity by making companies from outside the region wary; historically foreign bidders have shown that they can tolerate a high degree of regional tension. Given this, the impetus towards M&A looks set to continue for the rest of this year and beyond.