A new advisory report published today by the High Level Panel of Legal Experts on Media Freedom chaired by Lord Neuberger and Amal Clooney finds that journalists face unprecedented risks to their safety and makes a number of key recommendations to States, including the introduction of an emergency visa for journalists at risk.

The publication of the report – Providing Safe Refuge for Journalists at Risk– is marked by a virtual launch event on 23 November 2020 at the International Bar Association’s (Virtually Together) Annual Conference. Speaking at the event will be report author Professor Can Yeginsu, Lord Neuberger, Amal Clooney, Baroness Helena Kennedy QC, David McCraw of The New York Times, and Courtney Radsch of the Committee to Protect Journalists. Click here to attend the event.

Authored by leading international lawyer and member of the High Level Panel, Professor Yeginsu, the report on Providing Safe Refuge to Journalists at Risk is the third of a series of advisory reports directed to members of the 40 strong Media Freedom Coalition of States, led by the United Kingdom and Canadian Governments. The Panel is independent of government but has been tasked with providing advice to States that are committed to the protection of media freedom and the safety of journalists.

Every year, scores of journalists flee their countries to escape threats to their safety: threats that have arisen because they have performed their duties as journalists to report the truth. Leaving their home countries is often a last resort – the only way to escape politically motivated incarceration or violence. It is never a decision taken lightly, nor is it one motivated by a desire to relocate permanently.

The Report examines the present situation faced by journalists at risk, by reference to a number of case studies and an in-depth analysis of international law. It finds that the current legal pathways open to the journalist who has been left with no choice but to seek to relocate to another country are, at best, slow and difficult to navigate and, at worst, cumbersome and ineffective. This is particularly so where the need is to move swiftly in the face of an imminent threat. Many journalists are, as the Report shows, simply unable to move, with sometimes appalling consequences.

The Report concludes that it is individual States that hold the keys to safe refuge for journalists at risk. It makes the following recommendations for States to adopt: 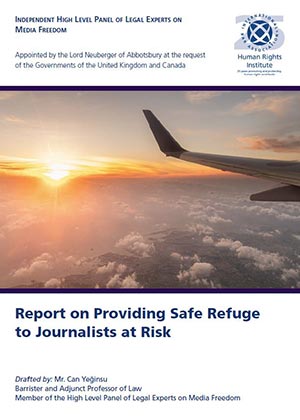 The Report’s publication comes a week after the Media Freedom Coalition’s first ministerial communique, which called on all State Members of the Coalition to consider ‘providing safe refuge for journalists at risk who have been targeted for their work’.

Professor Yeginsu’s Report and recommendations have received widespread endorsement by, inter alia: the Panel itself, the UN Special Rapporteur on the Promotion and Protection of Freedom of Opinion and Expression, the International Bar Association’s Human Rights Institute (IBAHRI) as well as:

Professor Can Yeginsu, Barrister, member of the Panel, and the Report’s author remarked: ‘There is a clear gap in the international legal protection for journalists who put themselves at risk to bring us the truth. States can bridge that gap, with little if any attendant political cost, by creating an emergency visa for journalists at risk and by making a few modest adjustments to the existing framework for safe relocation. I welcome the priority the Media Freedom Coalition has given to this issue in its recent ministerial communiqué. It is now time for words to be followed by deeds: the High Level Panel has made clear recommendations in this area which, if implemented, could have an enormous impact in strengthening media freedom, an essential pillar of a free and democratic society.’

The Rt Honourable Lord Neuberger of Abbotsbury, Panel Chair and former President of the UK Supreme Court, added: ‘The root evil that underlies so many illegitimate abuses of media freedom is, as Professor Yeginsu’s valuable Report shows all too clearly, the ultimate threat of violence to journalists and their families. Affirming the need and importance to respect and ensure media freedom globally is easy to do with words, but that is plainly not enough. The key recommendation of this Report is the creation of an emergency visa for journalists at risk, which offers an effective way whereby any government can help to ensure that journalists at risk have safe, reliable, and effective pathways to safety.’ 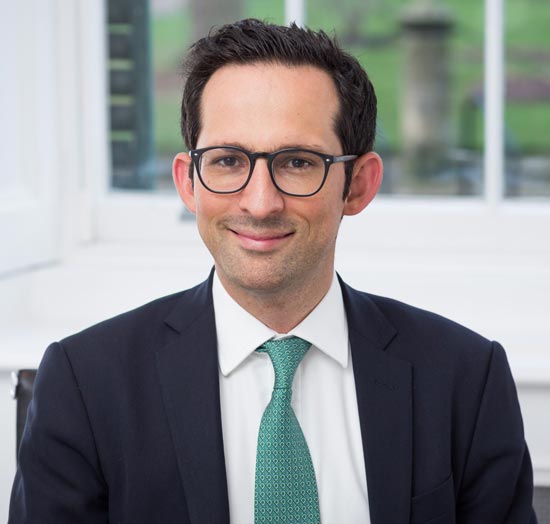 Ms Amal Clooney, Barrister and Deputy Chair of the Panel commented: ‘Every year hundreds of journalists are murdered or imprisoned for their work. At least some could have been saved if democratic countries had provided a pathway out of harm’s way. I am proud to launch the Panel’s third report, which recommends that States provide emergency visas to journalists at risk of physical harm or arbitrary detention. The report, authored by leading barrister and human rights expert Can Yeginsu, highlights concrete legislative and policy initiatives that States can take to support journalists at risk. All of the Panel reports this year relate to improving the enforcement of international legal protections that exist on paper but need to be given effect by governments. Our aim is to bring to life the commitment made by 173 governments that have ratified the International Covenant on Civil and Political Rights and in doing so promised to protect freedom of the press. So we look forward to hearing the response of States - particularly the members of the Media Freedom Coalition - to these compelling recommendations.’

Footage of the event will shortly be available on the IBA website www.ibanet.org