Comparative Law: what do lawyers in practice really need to know

Back to Academic and Professional Development Committee publications 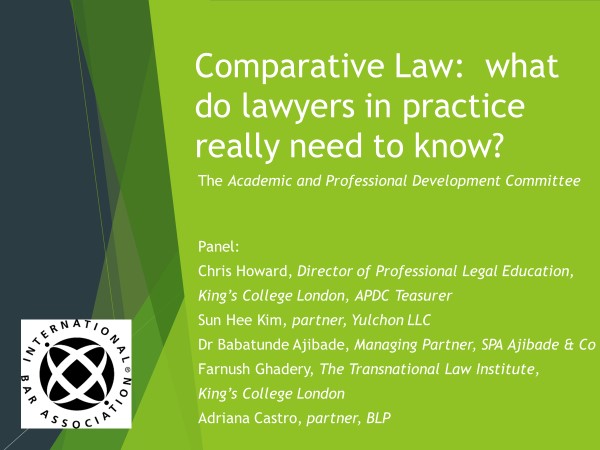 The session was well attended, not least given that it was early in the week, and the discussion was extremely engaging.

The session began with a deep dive into the academic study of comparative law from Farnush Ghadery, a PhD candidate and Senior Research Fellow at the Transnational Law Institute, forming part of the Dickson Poon School of Law, King’s College London.Ghadery deftly navigated the definitions of Critical Comparative Law and Transnational Law, giving an insight into the importance of categorisation and systematic analysis in the study of multiple legal systems. She then presented an example study of the nature of Transnational Legal Feminism, highlighting the conceptual challenges.

Dr Babatunde Ajibade and Adriana Castro followed Farnush’s talk with their own insights on the importance of a comparative legal perspective for a commercial practitioner working across global markets. Abijade provided an engaging account of his journey both as an academic and as a practitioner and explained the value his studies had brought to the establishment of his practice in Nigeria.  Similarly, Castro provided an account of her educational and experiential pathway to becoming a senior practitioner in Costa Rica and the value to clients of her global perspective.

Finally, Sun Hee Kim, a partner at Yulchon LLC, gave us a valuable account of her work in a major South Korean firm and provided a specific case study of comparative law in the field of GDPR regulation, looking at her own cross-border work.

The discussion which followed raised many further questions about comparative law and we were delighted to receive input from a variety of practitioners, from different jurisdictions and practice areas. The success of the session was a testament to the quality of all the contributors and the enduring importance of the study of comparative law. The extent of the requirement for a knowledge of comparative law remains elusive. It was clear from this dynamic discussion, however, that it is essential for practitioners not to become siloed in their own domestic setting, but rather to embrace comparative analysis, for the benefit of their clients and for the development of an efficient global legal system.

Back to Academic and Professional Development Committee publications