Recent events have presented reformers with a remarkable moment of opportunity. But overhauling a deep-seated gun culture and gun-friendly legal regime remains a considerable challenge.

Civilian guns kill ten times the number of Americans each year as the number of fatalities on the bloodiest day in United States history, on the Civil War battlefield at Antietam. By contrast, the European Union loses only one tenth as many lives to civilian guns each year as the combatants lost on the bloodiest day at the Battle of the Somme. America’s sad exceptionalism is partly explained by a deep-seated gun culture. But it’s also partly explained by a gun-friendly legal regime, and that legal regime has surprisingly shallow roots. Law is easier to change than culture, and gun reformers face a moment of opportunity. With America’s conscience awakened by the massacre in Parkland, Florida, should the gun control movement aim to topple the legal pillars of gun protection?

The first pillar of the US gun regime is the Second Amendment, which reads simply: ‘A well regulated militia being necessary to the security of a free state, the right of the people to keep and bear arms shall not be infringed.’ While this guarantee dates to 1789, Justice Antonin Scalia only interpreted it a decade ago, in District of Columbia v Heller, to extend beyond 18th-century militias and protect guns in the home. This will inevitably put the Supreme Court in the business of regulating and overseeing the regulation of guns, much as it does abortion. The Court has so far avoided defining the boundaries of the newly expansive Second Amendment. But gun advocates are agitating to constitutionalise the right to carry a concealed weapon anywhere (regardless of state law), and a circuit split may be on the horizon. Though a few small nations like Guatemala and Haiti maintain equivalents to the Second Amendment (and both those nations have terrible gun problems), the US is unique among developing nations in constitutionalising gun protection.

After Parkland, Justice John Paul Stevens – Associate Justice of the Supreme Court from 1975 until he retired in 2010 – issued a ringing call to repeal the Second Amendment. But the lifelong Republican is forgetting the reality of a nation evenly divided. The last time an amendment was passed by two-thirds of the full Congress and promptly ratified by three-quarters of the states was 1971. ‘It’s science fiction,’ says gun scholar Timothy Lytton of Georgia State University College of Law.

Restraining or reversing Heller’s dubious interpretation of the Second Amendment is much desired. But threatening the amendment itself only validates the fantasies of gun rights defenders like the late Charlton Heston, who iconically said that whoever came for his rifle would need to pry it ‘from my cold, dead hands’. As recently as May, President Trump pledged to the National Rifle Association: ‘Your Second Amendment rights are under siege, but they will never, ever be under siege as long as I’m your president.’

The second pillar of gun protection is the 2005 Protection of Lawful Commerce in Arms Act. This astonishing law – hailed by the gun lobby as the most significant in a generation – gave gun manufacturers and retailers near-complete immunity from tort liability. Denouncing anti-gun suits as an ‘abuse of the legal system’, it brought all litigation to a crashing halt. Guns now enjoyed a uniquely privileged position in American law. Of course, Congress has killed other forms of tort litigation. But vaccine makers, for example, needed to accept an administrative system of compensation for victims as a condition of immunity. And vaccines remained tightly regulated by the Food and Drug Administration. By contrast, Congress gave gun victims no compensation. And it has always exempted guns from regulation by the Consumer Product Safety Commission. 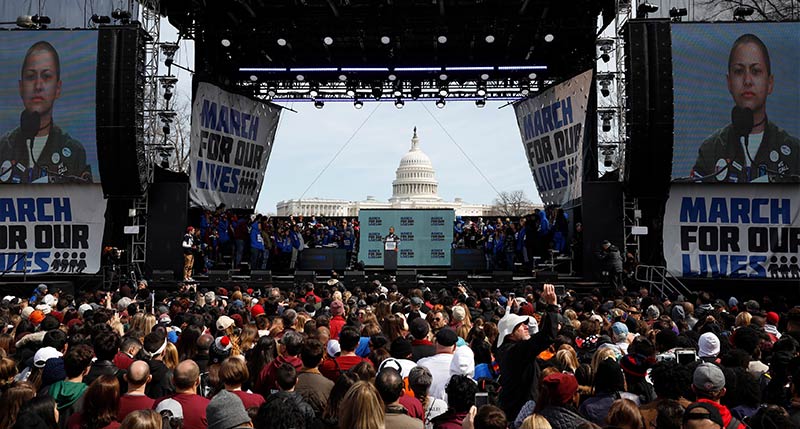 The ‘March for Our Lives’ event demanding gun control after recent school shootings at a rally in Washington, US, 24 March 2018. REUTERS/Aaron P Bernstein

Amid continued bloodshed, plaintiffs have renewed their effort to poke holes in gun immunity, by exploiting the Act’s exceptions for torts flowing from ‘negligent entrustment’ or violations of law. A breakthrough came in 2015, when a Wisconsin jury tagged the Badger Guns gun shop with a $6m verdict for selling a gun to someone who was transparently and unlawfully buying it for a teenager. The police officers who were shot by that teen sued and won a $1m settlement before appeal. It sent ‘a message that retailers are not immune from these types of lawsuits for irresponsible sales practices,’ says Lytton. ‘Rogue dealers are now on notice.’

In a closely watched test case, victims of the massacre in Newtown, Connecticut, are now trying to extend the same exceptions from retailers to manufacturers. Remington Arms is the maker of the Bushmaster AR-15 assault rifle used in the 2012 slaughter of 20 students at Sandy Hook Elementary School. Plaintiffs say the gun-maker violated the doctrine of negligent entrustment, as well as the state consumer protection act, by appealing to untrained and possibly disturbed civilians who are military fantasists with slogans like ‘Consider Your Man Card Reissued,’ and ‘… when you demand a rifle as mission-adaptable as you are’.

Remington retorts that negligent entrustment only applies when a product is directly entrusted to a foreseeably risky individual, as opposed to a dangerous public, and the buyer here was the killer’s undisturbed mother. If plaintiffs’ argument is really about ‘negligent marketing’, that’s a theory that Congress squashed. Finally, Remington says plaintiffs needed to show that it broke a gun-specific law; the consumer act that they cite is too general, and anyway demands a relationship to the manufacturer that they lack. The Connecticut trial court dismissed the case – but the state Supreme Court will soon rule on appeal. ‘It’s very likely if the Connecticut Supreme Court opens the door to manufacturer liability,’ says Lytton, that the US ‘Supreme Court will want to clarify what the boundaries of immunity are for gun manufacturers. It’s an issue of national importance.’

For some reason, Parkland has provoked ambitious talk of taking an axe to the Bill of Rights, while a ten-year-old law immunising the gun industry from tort liability has been accepted as an immovable feature of the landscape. If the Sandy Hook plaintiffs fail to erode immunity through the courts, gun reformers should at least ask Congress to codify their broad reading of the exceptions to immunity. To whatever extent it is feasible, they should aim to roll back the gun industry’s immunity from product safety regulation, and even from tort liability.

The gun scholar John Donohue, Professor of Law at Stanford University, says that regulating firearms through tort litigation could be a worthy strategy precisely because the gun lobby has captured the nation’s legislatures. ‘It’s hard to see any other issue in American politics that is so universally embraced by the public but so completely shut down by the special interests,’ he says. ‘So, in that context, turning the tort lawyers loose could be a democracy enhancing move.’

“Your Second Amendment rights are under siege, but they will never, ever be under siege as long as I’m your president

Lytton doubts Congress would reverse a generation-long trend by expanding access to the courts. And as someone who lives in Georgia, he’s skeptical about the extent to which high school protests sparked by Parkland can galvanize the necessary change. ‘You can get as many 17 year olds as you want to march in Washington, DC,’ he says, ‘but until you’ve talked to someone who has an AR-15 in their house and is convinced that there are four guys coming in to steal their stuff and rape their daughters, I don’t think you can generalise about a big shift going on in America.’

Chelsea Parsons, who researches gun violence at the Center for American Progress, is more optimistic. Parkland’s lasting legacy, she believes, will be to push gun reform toward the top of the progressive agenda. The last time Democrats controlled the Presidency and both houses of Congress, in the early Obama years, they didn’t try to pass a single gun measure. The next time it happens, she thinks Democrats will have the courage of their gun control convictions.

A wise gun reform majority would not spend its energy attacking the sacred bastion of the Second Amendment, or vainly trying to pry a rifle from Charlton Heston’s cold, dead hands. Rather, it would push overwhelmingly popular gun measures, like a ban on assault weapons and a universal background check. It would empower regulators to protect every facet of public health and safety, informed by fresh research on gun violence. And, in an ideal world, it would end the gun industry’s anomalous total immunity from the bracing discipline of tort law.

Michael Goldhaber is the IBA US Correspondent. He can be contacted at michael.goldhaber@int-bar.org