In recent years, statues of contested historical figures have been at the centre of fierce public debate: the call to remove the statue of the 19th-century colonial-era businessman, Cecil Rhodes, in South Africa; objections about a new statue of Captain Cook in Sydney’s Botany Bay; violent and deadly altercations over Confederate generals in Charlottesville, Virginia. Most of these statues have been standing for decades with rarely a complaint. Suddenly, they are being assaulted with sledge hammers, wrenched from their pedestals and spirited away in the dark of night. But why now?

‘Controversies about statues are really about not responding with understanding and sensitivity to the changing nature of our societies,’ says Baroness Usha Prashar, a crossbench member of the United Kingdom House of Lords. ‘It is about identity.’ Prashar, who served as Director of ‘race equality think tank’ the Runnymede Trust, sees issues of ‘acceptance, integration and sense of belonging’ at the core of these controversies.

New Orleans Mayor Mitch Landrieu, agrees. ‘This is not just about statues,’ Landrieu says. ‘This is about our attitudes and behaviour as well.’ In May 2017, Landrieu removed four prominently placed statues of Confederate-era ‘heroes’, in recognition of the city’s shifting demographics and evolving cultural sensitivities. Once the largest slave-trade market in the United States, and a bastion of anti-abolitionist sentiment and white supremacy, New Orleans is now home to a majority African-American population, which currently represents 60 per cent of the residents. By removing public monuments that celebrated the former slave-holding South, Landrieu was aligning New Orleans’ cityscape with contemporary demographic realities and seeking to create a more inclusive environment. He sees the removal of statues as the most visible part of a larger social project for his city. ‘If we take these statues down and don’t change to become a more open and inclusive society,’ Landrieu says, ‘this would have all been in vain.’

We erect statues to commemorate heroes of one era, writing history into public spaces, which, in turn, shape the collective public identity of a community. The problem is that times change, demographics change, but statues do not. They continue to reflect the ‘master narrative’ of a society, which may no longer be shared by the larger community. These ‘master narratives’, a term coined by Ronald Takaki, the late Japanese-American historian and pioneer in multicultural studies, were originally applied to American history – the widely held but inaccurate view that ‘American’ means white or European in ancestry – but is now embraced by activists around the world reflecting on the narratives in their own societies.


In the UK, the 18th-century slave trader Edward Colston has been celebrated for his benefaction to the City of Bristol – statues, buildings, even pastries have been named for him. In a city where the black and minority ethnic population has doubled since the start of the new millennium (from 8.2 per cent in 2001 to 16 per cent in 2011), citizens are joining the Countering Colston Movement, questioning why a white colonialist, who made his fortune trading slaves from Africa, should be celebrated in a city that prides itself on diversity and just elected a person of colour as its Lord Mayor.

Colston is not alone. The statue of Cecil Rhodes, who made his fortune in diamond mines in South Africa (and used that fortune to establish the prestigious Rhodes Scholarships) was toppled by students in Cape Town in April 2015. The Rhodes Must Fall movement subsequently staged protests at Oxford University, demanding the removal of a Rhodes statue on the High Street, but the protests have since waned. The statue still stands. But the controversy has sparked a nationwide debate over a ‘balance sheet of the rights and wrongs of imperialism’, with accusations of attempts at whitewashing by apologists for colonialism.

In Canada, there have been similar controversies over statues and memorials to figures who perpetrated wrongs against the country’s indigenous peoples. In the city of Halifax, a statue of Edward Cornwallis, a governor of Nova Scotia, who put a bounty on the scalps of Mi’kmaq people, became the center of public demonstrations. The statue was removed last February. At the federal level, the Inuits raised similar objections to Ottawa’s ‘Langevin Block’, the seat of government, named after Hector-Louis Langevin, who engineered Canada’s notorious assimilation policies, like residential schools. ‘If you wish to educate these children you must separate them from their parents during the time that they are being educated,’ Langevin told Parliament in 1883. ‘If you leave them in the family they may know how to read and write, but they still remain savages.’ In June 2017, the Langevin Block was officially renamed ‘Office of the Prime Minister and Privy Council’. 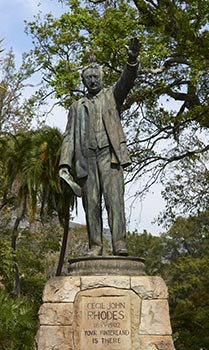 In the US, the attempts to remove statues of contested historical figures have been complicated by national, state and municipal laws and ordinances, especially following the shooting of nine African-American parishioners by a white supremacist in June 2015. That summer, the North Carolina State legislature moved preemptively to block statue removals by passing a law protecting ‘objects of remembrance’. In August 2017, in response to violence in Charlottesville surrounding the statues of Robert E Lee and Stonewall Jackson, North Carolina Governor Roy Cooper called for removal of Confederate statues from state property. He was duly reminded that removal would violate the Heritage Protection Act, enacted in July 2013. In response, angered protesters assembled in front of the old county courthouse in Durham, placing a noose around the neck of a statue commemorating ‘the boys who wore the grey’, and toppling it from its pedestal. The bronze statue crumpled as it struck the ground. It was set upon by protesters who kicked and spat on the twisted heap of metal. The protesters were identified and arrested, but the charges were dropped in February 2018.

Jim Strickland, the Mayor of Memphis, Tennessee, sought to remove statues of two controversial Confederate figures: President of the Confederacy Jefferson Davis, and notorious founder of the Ku Klux Klan, Bedford Forrest. But, he confronted the Tennessee Heritage Protection Act, passed in 2013 and amended in 2016, prohibiting the ‘removal, relocation or renaming’ of memorials on public property. Strickland sought a waiver from the Tennessee Historical Commission, which was rejected, so he resorted to a legal loophole. Strickland sold the two city parks where the statues stood, each for $1,000 to a local nonprofit organisation, Memphis Greenspace, which immediately had the statues removed. ‘I was committed to remove the statues in a lawful way,’ Strickland wrote last December. ‘From the beginning, we have followed State law – and tonight’s action is no different.’


The greatest controversy has surrounded the statues of southern generals Robert E Lee and Stonewall Jackson in Charlottesville, Virginia, where a young woman was killed amid violent protests


The greatest controversy has surrounded the statues of southern generals Robert E Lee and Stonewall Jackson in Charlottesville, Virginia, where last August a young woman was killed amid violent protests. While media attention has focused on the public demonstrations, the origins of the dispute lie not on the streets but embedded in a tangle of State heritage protection laws. In March 2017, the Virginia division of the Sons of Confederate Veterans, along with other plaintiffs, sued the city of Charlottesville following a three-to-two vote by the city council to remove the statues of Lee and Jackson from public spaces.

The suit was based on an arcane law, passed by the State’s General Assembly in 1904, barring counties and other local jurisdictions from removing public memorials to war veterans. The law was updated in 1997 to include cities. Charlottesville argued that the city was independent of any county jurisdiction – since the Lee and Jackson statues were erected in 1921 and 1924, and the 1997 amendment could not be applied retroactively – and therefore free to remove the two enormous bronze monuments.

The judge, Richard E Moore, prohibited the city from removing the statues until the case was decided. In August, while the court decision was pending, protests and counter-protests erupted in the streets of Charlottesville, followed by massive public pressure on the court, which was inundated with ‘thousands of phone calls, letters and emails’. Judge Moore was not to be moved. The Washington Post reported the judge saying that the lobbyist campaigns were ‘counterproductive’, a ‘distraction’ and ‘worse than a waste of time’. ‘That’s not how our system works, nor should it work,’ Moore said. The city responded by shrouding the statues ‘to mourn the loss of life and severe injuries to members of our community’, while awaiting a court decision. In February, Judge Moore ordered the shrouds removed but is still deliberating on the disposition of the statues. Regardless of the Charlottesville District Court decision, the case will certainly go to the Virginia State appellate court, and perhaps beyond. In the interim, the statues of General Lee and General Jackson, still stand, awaiting their final judgment.

Timothy Ryback is Executive Director of the Institute for Historical Justice and Reconciliation, in The Hague, and can be contacted at ryback@ihjr.org