In May 2019, eight inhabitants of a group of islands off the northern tip of Queensland launched a claim against the Australian federal government, alleging that it has violated their human rights by failing to address the climate crisis.

Small island states are extremely vulnerable to the adverse effects of climate change, raising questions of accountability as their inhabitants face the very real threat of displacement.

‘This is the first time that people from very low-lying islands that are at risk of dispossession have taken action against a nation state for the impact of climate change,’ says ClientEarth’s Sophie Marjanac, who’s taking a lead on the case. ‘This is a world first. We’re looking at a human rights crisis in the Torres Strait with climate change refugees within Australia and no one is talking about it.’

The islanders allege that Australia has violated the International Covenant on Civil and Political Rights (ICCPR), marking the first time a climate action has been brought under this treaty. The complaint has been filed with the UN Human Rights Committee, which monitors how signatory states comply with the ICCPR. It alleges that Australia has implemented ‘insufficient greenhouse gas mitigation targets and plans’ and also advocates for the country to help ‘fund adequate coastal defence and resilience measures on the islands’.

I visited one of the first communities in the world that had to be relocated because of the impacts of climate change. It was really heart-breaking


The Torres Strait comprises more than 270 islands. Around 18 of these are inhabited by an indigenous community at risk of losing their ancestral homeland within the next twenty years. ‘That’s frightening because the children that are in the primary school there today are going to be fundamentally poorer because they won’t have that connection to their culture,’ says Marjanac. ‘That’s what the case is about: the right to culture, as well as the right to life, family and home.’

In December 2018, Dr David Boyd, UN Special Rapporteur on Human Rights and the Environment, visited Fiji in the South Pacific Ocean, where he said the impact of climate change is already abundantly clear. ‘I visited one of the first communities in the world that had to be relocated because of the impacts of climate change,’ he says. ‘It was really heart-breaking to see the change in the people's quality of life as a result of having to move from a beautiful oceanfront village to a kind of scraped off hillside two kilometres inland.’

Rising sea levels, droughts, floods, and tropical storms have already inflicted extensive damage on Fiji’s more than 330 islands. Boyd will present a report at the next UN General Assembly putting forward obligations on states to protect human rights from the impacts of climate change. He says Fiji has already been a ‘huge voice’ for other small island states calling on wealthy, industrialised nations to save them from displacement. ‘For a country of fewer than a million people their voice on climate change has been disproportionately large and continued,’ he says. ‘They continue to really strongly advocate for more [and] faster action to deal with this existential threat to small island states.’ 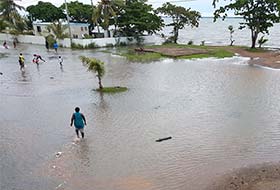 Boigu Island after sea inundation from a ‘king tide’ event

Although the UN Human Rights Committee could take up to three years to issue a decision in the Torres Strait case, Marjanac says the case could inspire other human rights-based climate lawsuits. ‘States have to reduce emissions to be in line with 1.5°C goal of the Paris Agreement in order to protect human rights,’ she says. ‘It’s not just our clients, but people living on other low-lying islands that are really at risk of sea level rise.’

In November 2018, Vanuatu, an island in the South Pacific, announced it was considering taking legal action against the world’s most polluting fossil fuel corporations and countries for their role in causing climate change.

This was a month after the Intergovernmental Panel on Climate Change (IPCC) published a damning report calling for ‘rapid, far-reaching and unprecedented changes’ to keep global warming to 1.5°C. Crucially for island nations, the report identified that reducing global emissions to 1.5°C could cause sea levels to rise 10cm less by 2100 than if they remained at 2°C. This is particularly significant for Vanuatu, where the UN first identified ‘climate change refugees’ in 2005 when around 100 villagers in the northern part of the island were forced to relocate inland.

Anne O’Donoghue, Co-Chair of the IBA Immigration and Nationality Law Committee, says there may be circumstances where states need to examine their own duties to safeguard human rights against the ill effects of climate change. ‘Certainly, I think where migrant children are concerned there’s a special case and I can see similar obligations for countries and companies to anti-trafficking and anti-slavery legislation,’ she says.

O’Donoghue believes lawyers can play a fundamental role in ensuring vulnerable communities have a voice: ‘Litigation will be the prime mover of change, but these South Pacific islands and people that are having their communities eroded from them because of the lack of action on climate change won’t have the money to fund these types of actions. It will only happen if there’s access to justice and big law firms are prepared to carry these claims.’