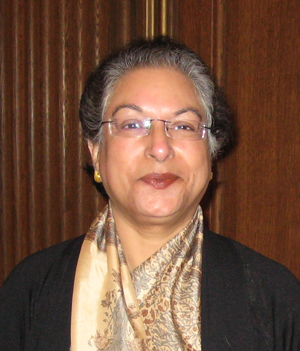 Ms Jilani grew up in Pakistan. Her father was a politician and an outspoken critic of the country’s military dictatorship, who spent much of her childhood in prison. Injustices and human rights abuses witnessed first-hand sparked a lifelong commitment to challenging social norms and promoting human rights and democracy in Pakistan, and around the world, in Ms Jilani. She said, ‘I always had this feeling that if you see injustice, you have to speak out against it; otherwise you are not in a position to complain.’

In 1980, Ms Jilani founded Pakistan’s first all-female law firm, providing legal aid to women. The scope of her practice grew to include legal education, research and protection from exploitation. The same year she established the Women’s Action Forum, a campaign group that advocated for women’s rights and challenged the discriminatory laws with which she had grown up.

In 1986 Ms Jilani set up Pakistan’s first Legal Aid Centre, going on to conduct many landmark cases and setting new standards for human rights in Pakistan. Her focus has always been the most vulnerable sections of society. In the same year, the Human Rights Commission of Pakistan was established with Ms Jilani as one of its founding members. Today, it has branches throughout the country and is the most renowned national body for the monitoring of human rights violations.

In 1990, Ms Jilani co-founded Dastak, a shelter providing free legal counsel and support to women fleeing gender-based violence. It also raises awareness on issues such as domestic abuse, child marriages and ‘honour killings’. Her work often makes her vulnerable to hostile propaganda, arrests, abuse and intimidation, but she continues to live and work in Lahore, where she remains committed to social change and at the heart of the human rights movement.

The new millennium brought further achievements including her appointment as the first Special Representative of the United Nations Secretary-General on Human Rights Defenders in 2000. A position that saw her spend the following eight years working to empower and protect those campaigning for civil rights. In 2013, Ms Jilani joined The Elders, a group of independent global leaders founded by Nelson Mandela. Their vision is to work together for peace, justice and human rights, to promote ethical governance, to resolve conflict and address its root causes and to challenge injustice. Ms Jilani’s first mission was to Myanmar in 2014, when the delegation met with government officials, the militia and civil society, calling on the warring parties to end their fighting and discuss opportunities for change.

Ms Jilani remains an Advocate of the Supreme Court of Pakistan, having been appointed in 1992. She also currently serves as President of the World Organisation against Torture, Co-Chair of the World Refugee Council and Co-Chair of the International Task Force on Justice.

The Stockholm Human Rights Award is given to an individual, and/or organisation, for outstanding contributions to human rights and the rule of law. Last year’s recipients were David Miliband and the humanitarian aid body the International Rescue Committee (IRC) that he heads.

The Award will be presented to Ms Jilani on Monday 30 November 2020 at the Swedish Bar Association, Laboratoriegatan 4, 102 54, Stockholm, Sweden. An interview with IBA Executive Director Dr Ellis will follow. The event will be livestreamed.– UPDATE: Due to Covid-19-related restrictions, the presentation has been postponed to next year, for a more ceremonial celebration. Pandemic permitting, the preliminary date is set to 6 December 2021.