IBAHRI condemns mass arrests, police brutality and use of law to suffocate dissent in Russia 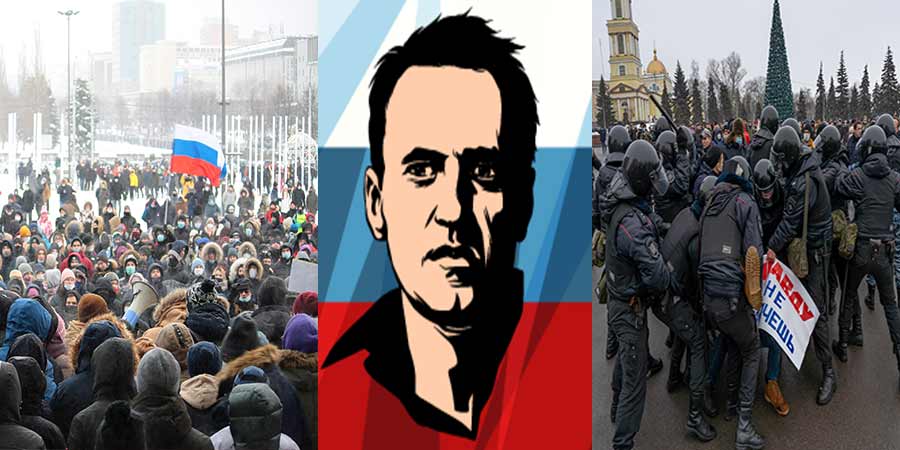 The International Bar Association’s Human Rights Institute (IBAHRI) condemns the arrests of more than 6,000 protestors across Russia, the violence inflicted by the country’s security forces on peaceful demonstrators who were demanding the release of the detained, and subsequently jailed, opposition leader Alexey Navalny and the use of law to stifle dissidents.

On 2 February 2021, a court ruled that Mr Navalny, an anti-corruption campaigner, had breached the terms of a 2014 suspended sentence on fraud charges – which he maintains were fabricated and politically motivated – and commuted the sentence to jail time of three years and six months. This will be reduced, by the amount of time that he has already spent in detention, to two years and eight months.

Mr Navalny was expected to report to the prison service in Russia every two weeks until 30 December 2020. However, he was in hospital in Germany from August 2020 for five months convalescing from being poisoned.

On return from Germany on 17January 2021, Mr Navalny was detained by Russian authorities. Demonstrations broke out in many parts of Russia over the two following weekends, as well as on the day the prison sentence was issued. The mass arrests on 31 January are the largest recorded by non-governmental observers in one protest in the country’s modern history.

News reports have shown protestors being beaten and dragged by law enforcement officials. An independent trade union of journalists documented over 50 incidents of police assaulting journalists, despite them being clearly identified as members of the press.

IBAHRI Co-Chair and former Justice of the High Court of Australia (1996–2006), the Hon Michael Kirby AC CMG, commented; ‘The level of violence meted out to the protestors by police and other agents of the Russian Federationis shocking. The IBAHRI urges the immediate release of those arrested and calls on Russia’s authorities to respect international human rights norms. Having ratified the International Covenant on Civil and Political Rights (ICCPR), the Russian government has an obligation to protect citizens’ rights to peaceful assembly as laid out in Article 21. The government also has the duty to safeguard the right of freedom of expression as defined in Article 19 of the ICCPR, which states, “this right shall include freedom to seek, receive and impart information and ideas of all kinds, regardless of frontiers, either orally, in writing or in print, in the form of art, or through any other media of his [her] choice.”The attacks against journalists are undoubtedly in violation of this obligation and perpetrators must be held accountable.’

Mr Kirby added: ‘In 2017, the European Court of Human Rights ruled that Mr Navalny’s conviction was unlawful, describing it as “arbitrary and manifestly unreasonable”. As the world watches, President Putin is also on trial, in the court of Russian public opinion. Russian citizens are becoming increasingly dissatisfied and alarmed at the violence meted out to other citizens for doing what in other European countries is viewed as no more than the expression of serious disagreement with the actions of the Government. How long do the people of the Russian Federation, who struggled heroically against invasion and oppression from abroad, have to wait before they enjoy the fruits of a normal open and transparent democracy? We call for the release of Mr Navalny.’

Senior officials, including President Vladimir Putin and the Mayor of Moscow Sergey Sobyanin, have labelled the protests a security threat, deemed them illegal and have taken action to ban peaceful protests. These comments have been made despite the protection of freedom of expression and opinion under the Universal Declaration of Human Rights.

IBAHRI Co-Chair and immediate past Secretary-General of the Swedish Bar Association, Anne Ramberg Dr jur hc, commented: ‘When protestors from more than 100 cities demonstrate on an issue, a government would do well to listen to the concerns and frustrations being aired. However, the reaction of arresting so many demonstrators in Russia can only lead one to conclude that the desired effect is to silence any critique of the current administration and to have a chilling effect on any would-be protestor. Furthermore, discouraging journalists and media workers from reporting on urgent matters of public interest, including the ongoing protests and treatment of demonstrators, deprives citizens of their right of access to information.The world is witnessing assaults on the fundamental elements of any free society where democratic discourse is respected. It is imperative that the international community, in particular the European Union, strongly rejects these suppressions and use of force by officials in Russia and demands the release of those arrested.’