Cambodia's ruling party has returned to power following a landslide victory in national elections on 29 July. But, following what many observers see as a campaign of coercion by the Cambodian People's Party (CPP), there's been strong international criticism that the country has continued its slide away from democracy.

Twenty parties contested the election, but final polling results released in mid-August showed the ruling CPP won every one of the 125 seats in Parliament. Most of the parties were miniscule, many created just months before the election, while the main opposition – the Cambodia National Rescue Party (CNRP) – was dissolved last year and barred from participating. For voters, the ballot presented few true choices.

‘As a people we have a very hard decision to make at the moment. We’re given very limited options – just one,’ explained one voter, who wished to remain anonymous.

Prime Minister Hun Sen – who has already served more than three decades in power – was reappointed following a large-scale government campaign sullied by threats of arrests and fines for non-voters, and reports of intimidation by the authorities.

‘With the dissolution of the CNRP and the political imprisonment of its leaders, the ruling CPP had already commanded an absolute advantage over other miniscule opposition parties,' says Felix Ng, Asia Pacific Regional Representative of the IBA’s Criminal Law Committee. 'This coercion simply reinforced the strong suspicions that this election was an "undemocratic sham".’

Turnout topped 82 per cent, but signs of dissatisfaction were widely evident in the form of spoiled ballots. Among the 6.9 million votes cast, nearly 600,000 were invalid – more than 8.5 per cent. In the 2013 election, that figure was just 1.6 per cent.

Following the vote, a number of countries offered strong criticism. The US government called the election ‘the most significant setback yet’ to Cambodia’s democracy and suggested it would be expanding visa sanctions against more members of the ruling party. The Australian government said the election ‘reversed more than 25 years of progress toward democracy in Cambodia’.

Most notably, Japan, which is one of Cambodia’s largest donors but rarely comments on its political or human rights record, raised a number of concerns. ‘The results were disappointing in many ways as many of the ballots were judged invalid, although Japan had given its support to ensure the polls would reflect the will of the voters,’ Japan’s Foreign Minister said after a meeting with his Cambodian counterpart.

Katrin Travouillon, a Cambodian politics researcher at the Australian National University, says the latest election reveals the extent to which the country’s political systems are a veneer. ‘Since 1993, most donors and observers have focused on elections to reassure themselves that that they are witnessing a slow but steady process of democratisation in Cambodia, when effectively, all the government did was to slowly and steadily modernise its system of political and economic patronage.’ 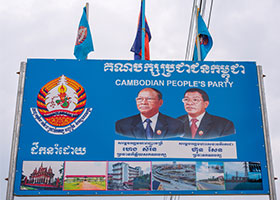 Some voters told Global Insight on the eve of the election that the ruling party had put pressure on them to attend CPP rallies. One women, who instead attended a gathering for a royalist party, said: ‘The CPP group leader tried to intimidate me, saying you cannot go, although they give you more money,’ adding that she’d held her ground and insisted on her right to support an alternative party.

Ng says the context in which the vote was held left little hope for its legitimacy. ‘Coercing voters to cast their ballots per se may not affect the legality of the election. However, there were reports that voters who intended to take part in the CNRP’s Clean Fingers campaign [for a voter boycott] or vote for the 19 opposition parties were subject to various sorts of intimidation by authorities, especially in the rural areas,’ he says.

The former opposition, which has raised questions over voter turnout figures along with the vote legitimacy, is urging foreign nations to take action against Hun Sen.

‘We call on democratic government not to recognise the results of the election... When we talk about investing in Cambodia, when we talk about assistant to the government of Cambodia... we have to put into the context that the people of Cambodia want true peace and true democracy,’ said former CNRP Deputy President Mu Sochua. ‘You cannot sit next to a dictator at any meeting, you can’t invite a dictator to any meeting and pretend there is peace in the region, respect for human rights and democracy in the region.’

It seems unlikely that will come to pass. Prime Minister Hun Sen has already said he intends to attend and speak at the United Nations, ‘for you to see that as a sovereign state, which held its own elections, we don’t need stamps of approval from anyone’.