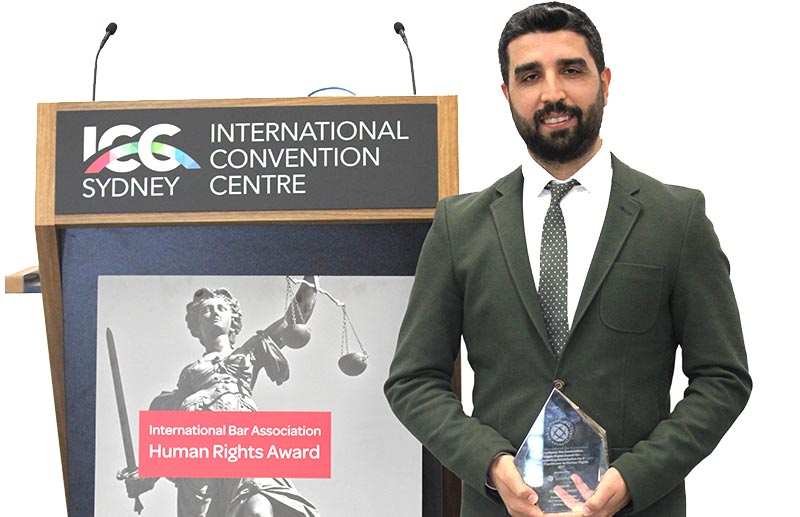 The winner of this year’s IBA Human Rights Award, Turkish lawyer Ramazan Demir has been representing victims, journalists and lawyers in Turkey under extremely difficult conditions. What follows is an edited version of his emotional and impassioned acceptance speech.

Today, I want to give you an example, just to briefly make you understand what, as lawyers, we are actually facing in Turkey. The day before I arrived, 15 lawyers, all my friends and human rights lawyers, were detained in Istanbul. My last week was actually passed there under interrogation and in custody. The situation shows how lawyers struggling for human rights in Turkey have been facing serious attacks and security risks, including but not limited to arrest, detention, threats and intimidation, and even murder, which we have recently experienced with the President of the Bar of Diyarbak?r, Tahir El?i, assassinated by security forces.

For lawyers in Turkey, this has not just started recently. It didn’t start with us; with me. It’s lasted a decade. Not too long ago, just a couple of years back, we were thinking that, despite our difficulties, changes were possible. Even though limited, our actions were influencing the state policies as lawyers, as human rights defenders. Backed by the European Union accession process in early 2000, reforms were underway, giving us all warm encouragement. Sadly, we are back to the dark times we thought we would never see again.

We started witnessing the backlash with the brutal police actions towards the Bar protest, which was the most peaceful of actions that anyone has ever seen, and with the Kobane demonstrators in 2013 and 2014. Governments offered support and approval of the police misconduct. Shortly after, the peace process broke down between the government and the Kurdistan Workers’ Party (PKK). Armed conflict has been brought into the cities, initiating violence and confrontations never seen before.

Conflict affected the lives of hundreds of thousands of civilians, including my own family. Cities and districts have been taken under siege, preventing any body or organisation, including the United Nations [from entering]. There were several applications to the government; they didn’t let them enter, monitor or report from the ground.

Around-the-clock curfews prevented inhabitants from obtaining their most basic humanitarian needs. Human Rights Foundation submitted that, during this period, 1,425 people (which is not a final number yet) were killed by security forces and other insurgents. More than 2,500 people were injured, and 2 million people affected, by way of forced displacement or damage to properties. The lack of any effective response from the international community to the great violation of human rights taking place during this period has been desolate.

Just in Cizre, in the south-eastern part of Turkey (it’s the Kurdish region) at least 224 people, all civilians, including 42 children and 31 women, have been killed by the state in clashes since the curfew was imposed in August 2015, according to the Human Rights Foundation report. And me? I’m also a witness to this process, because I was involved as a lawyer. Amnesty International has mentioned also that the government’s military response was marred by gross human rights violations, and amounted to a collective punishment against the Kurdish population in Eastern Turkey, as the Human Rights Commissioner of the Council of Europe, Nils Muižnieks, expressed.

Cuts to water and electricity supplies, combined with the danger of accessing food and medical care while under fire, have had a devastating effect on residents. At this point, 178 civilians have been deliberately targeted in different basements of buildings and, among those, children as young as ten years old. The government not only deliberately targeted and killed them, but also burned these people. Some relatives were given parts of bones of their loved ones. Soon you will read these facts from the judgments of the European Court of Human Rights (ECHR).

I could only make 50 applications to the ECHR on behalf of these people before I was arrested, and so what I’m telling you now, you will probably read at the beginning of 2019 when the court reads the judgments: all legal actions we took concerning the curfew practices failed and no judicial institutions, including the constitutional court and ECHR, intervened effectively. I received five decisions from the Court just to provide people with ambulances, because the state was not sending ambulances to injured people.

“In early 2000, reforms were underway, giving us all warm encouragement. Sadly, we are back to the dark times we thought we would never see again

In the following years, there will be a number of judgements from the ECHR finding Turkey in violation of human rights obligations. But, will the mere decision, delivered years after the incidents, provide an effective remedy for the victims or help prevent the state from doing this?

The courts, which could have stopped several human rights violations by adopting a decision on the curfew, refrained from doing so. Instead, lawyers litigating against brutal state actions, human rights defenders raising awareness of this situation, and journalists writing about this have been targeted, arrested, detained and, finally, assassinated. Similar to the 1990s, the immunity of the MPs of the Peoples’ Democratic Party (HDP), which is widely referred to as a pro-Kurdish political party, was waived and a number of them unlawfully arrested. Right now, ten HDP MPs, including the co-chairs of the political party, are in prison, and I’m also representing them before the court and ECHR. A number of elected city or district mayors of the south-eastern region have also been imprisoned. The Minister of Interior removed many, many mayors from their office and replaced them with pro-government trustees.

While these policies took place, several Daesh suicide attacks all around the country resulted in the killing of more than 200 civilians. We witnessed a coup d’etat [attempt] on 15 July 2016 which, although luckily unsuccessful, damaged the rule of law and human rights. The coup attempt was used as a ground for the government to declare a state of emergency, which was not necessary at all.

Turkey submitted two derogation notifications to the related UN and Council of Europe institutions using the state of emergency as a ground for this. Hundreds of civil-society organisations

were shut down, including our law association. Incommunicado detentions have been brought back. Newspapers, radio stations and television channels are closed. There is strong censorship of the internet, social media and other forms of communication. The passports of thousands of people have been cancelled, without any reason or court order, including mine. Tens of thousands of public servants were removed from office. More than 5,000 of them were prosecutors and judges. And all these positions have been filled by people from the government.

The court’s powers to review all these emergency state actions have been seriously limited. And, with a recent judgement, the constitutional court unfortunately found itself not competent to review state of emergency-related decree laws, despite its previous case law indicating otherwise, due to the pressure from the government. All protections provided for the legal profession and their clients by domestic and international law have been taken away in practice, making it impossible for lawyers to properly represent their clients and protect their interests…

It was in these very dark days when my dear friends Lawyers for Lawyers and my precious family lawyer from Holland let me know that colleagues from the International Bar Association’s Human Rights Institute decided to give me the 2017 Human Rights Award. Recognition of this kind undoubtedly gives you power and courage to carry on the struggle and stand for human rights. It also shows that, in spite of feeling like you are shouting into the emptiness, your word is heard by someone and there is still hope. The recognition is strong enough to turn the sky blue again for us, providing those of us who are still alive with a new and fresh breath of life. This is why I accept this award on behalf of all lawyers and human rights defenders who have lost their lives in their struggle, or are imprisoned right now, especially in Turkey, or harassed for merely protecting the rights of others fighting for peace and justice.