It’s been a busy time since the Paris Agreement was finalised at the end of 2015. Governments have continued to grapple with finalising the rules for the Agreement ahead of the deadline for adopting them at December’s annual climate talks. Much of the focus has been on how governments are implementing their pledges, but increasingly non-state actors are filling the void left by leading states, particularly in the wake of President Trump’s rejection of the Paris Agreement.

In terms of global emissions, New Zealand and Costa Rica account for less than 1 per cent combined, but both are nations striving to burnish their green credentials: New Zealand by banning new offshore oil and gas explorations, ahead of a consultation on its Zero Carbon bill to enshrine a goal of being a net-zero economy by 2050, while Costa Rica’s newly elected President has proposed to ban all fossil fuels from the country.

‘A lot of it is driven from the top-down, from government policy, in the New Zealand context,’ says Simon Watt, a partner at Bell Gully in Wellington. ‘We’re small enough that the government can set the policy and pull the levers.’

Having been signed by just about every country in the world, they were committed to making the Paris Agreement a success even without the US

The Zero Carbon Act, once passed, ‘will give more certainty to business, to a point’, he adds, as a future government could in theory repeal it. The government is trying to ensure cross-party support for the legislation, and Watt says the proposal to have an independent climate commission to set the carbon budgets, similar to the UK’s model, ‘separates it from the politics and removes some of the partisanship’.

‘There are a lot of countries around the world who are doing really good stuff,’ says Martijn Wilder, head of Baker McKenzie's Global Environmental Markets and Climate Change practice. ‘Those collective countries will pull ahead on the low-carbon economy. [New Zealand] is basically demonstrating what it can do.’

Contrast these actions with those of the US, the world’s second-largest emitter but the only nation to have quit the Paris Agreement.

‘I remain confident that governments around the world and other actors will do what needs doing,’ says David W Rivkin, a partner at Debevoise & Plimpton and immediate past president of the IBA.

While attending the 2016 UN climate talks which followed the election of Donald Trump as US President, Rivkin says he was impressed with the reactions at the meeting. ‘People told me the Paris Agreement would never have been signed without the leadership of the United States, and that having been signed by just about every country in the world, they were committed to making it a success even without the US.’ 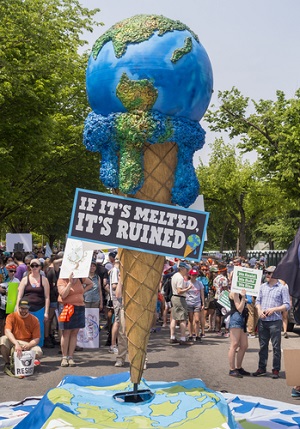 Dismayed by the federal government’s intransigence, state governments, cities, businesses, NGOs and private citizens have been stepping up their efforts. In April, Michael Bloomberg, businessman turned politician turned philanthropist - through his foundation Bloomberg Philanthropies - contributed $4.5m to the UN climate change secretariat, to cover 60% of the anticipated US funding for the year.

The foundation is also working with the UK and Canadian governments to phase out coal, an effort which Antha Williams, head of environment programmes at Bloomberg Philanthropies, says has been boosted by litigation and partnerships with Earthjustice and ClientEarth. ‘It’s useful what Bloomberg is doing, it shows what the private sector can do,’ says Wilder.

However, the efforts are coming at the same time that some groups are calling for businesses to be excluded from the UN climate talks, citing conflict of interest. Indeed, the UN climate secretariat came under pressure from some to reject Bloomberg’s financial contribution for this very reason.

‘You can set the rules at the UN level, but you need business to get the emissions reductions,’ says Wilder. ‘You cannot achieve the Paris Agreement goals without the private sector,’ especially when public sector funding for climate change actions is falling.

‘There’s so much money to be made by [technological] breakthroughs that there’s a lot of private industry drive to make that happen,’ says Rivkin.

Last year, Bloomberg teamed up with California’s Governor Jerry Brown to launch America’s Pledge, an initiative to bring together those subnational and non-government organisations committed to acting on climate change, under a banner of ‘We are still in’.

‘America’s Pledge is really the attempt to show the disconnect between the rhetoric you hear out of Washington DC with what’s happening on the ground,’ says Williams.

The initiative ‘tried to localise the issue’, adds Elan Strait director of US climate campaigns at WWF, which is one of the programme’s coordinators. ‘Sometimes the barrier isn’t that the entity is too small – we all know we ned to change behaviour, but sometimes they don’t know what they need to be doing.’

Earlier this year, the next phase of the coalition was launched, aimed at ‘putting action behind those words’, says Strait. All signatories have been asked for contributions outlining their actions to respond to climate change, with an aim of creating common goals.

‘I do think the US case is unique, but that doesn’t mean we don’t need this kind of action elsewhere,’ he says. ‘The Paris Agreement has always been bigger than just national governments,’ noting that the decisions accompanying the 2015 agreement calls on the private sector and subnational actors to take action.

‘You need both,’ agrees Lisa DeMarco, a senior partner at DeMarco Allan. ‘In terms of momentum and getting action … [the] private [sector] is very important.’ She points to increasing calls from investors for improved and increased climate risk disclosures from firms they hold shares in, which have increased since the Bloomberg-chaired Task force on Climate-Related Financial Disclosures released its recommendations in June 2017.

‘Once investors start demanding information, it puts a CEO’s mind on the issue and the assessment of risks and opportunities,’ she adds. ‘It’s not about mitigating risk, it’s about harnessing opportunities, regardless of where the politics are.’

‘If you really want solutions, you engage the full participation of non-state actors,’ says James Cameron, chairman of the London-based Overseas Development Institute and a fellow at the Yale Center for Environmental Law and Policy. He notes that the so-called Talanoa Dialogue taking place this year, aimed at increasing ambitions under the Paris Agreement, ‘is expressly designed to be inclusive’.

‘No one has a monopoly on the answers,’ Cameron adds. ‘The scale of the problem is so big that to argue that it can only be solved by inter-governmental [cooperation] is a fantasy.’