Inequality before the law

The Covid-19 pandemic has seen a surge in gender-based violence, which, along with the Black Lives Matter protests, is forcing a re-evaluation of how justice is delivered. Court processes need to be reimagined, but, to really move forward, biases in legal systems must be addressed.

Lady Justice is often depicted blindfolded to represent key tenets of the rule of law: independence and impartiality. These ideals are enshrined in Article 7 of the Universal Declaration of Human Rights, which states: ‘All are equal before the law and are entitled without any discrimination to equal protection of the law.’

But, reality tells a very different story. ‘Our system requires equality of arms,’ says Mark Woods, Co-Chair of the IBA Access to Justice and Legal Aid Committee, but ‘many groups, particularly indigenous people, suffer wholesale social disadvantage that limits their access to justice.’

And, sometimes, our legal and justice systems themselves perpetuate these inequalities. There are many ways racism can be a prevalent or institutional problem in criminal justice systems, including, for example, racial bias in sentencing and mass incarceration. The Sentencing Project highlights that in the United States ‘African American men are six times more likely to be incarcerated than white men.’

This is not proportionate to their crime rates or percentage of the population and, according to the US Sentencing Commission, in 2017, Black male offenders ‘continued to receive longer sentences than similarly situated white male offenders.’

Speaking in his personal capacity, Nawi Ukabiala, member of the IBA Human Rights Law Committee and an international public law practitioner, tells Global Insight that ‘Justice has never been blind in America. The disproportionate impact of mass incarceration on Blacks in the US follows a long tradition of legally sanctioned racism.’

In the United Kingdom, the 2017 Lammy report presents 35 recommendations to address racial inequality in the criminal justice system. But, none have been fully implemented. In fact, during the recent IBA webinar responding to the Black Lives Matter movement, the report’s author, David Lammy MP, highlighted that his 35 recommendations are among 250 unimplemented recommendations from other reports and inquiries. It is not the failure to find solutions that is the problem, but the political will to act on them sustainably and consistently.

Ukabiala says, ‘history tells us that no single criminal justice reform alone will end systemic racism in America.’ Instead, he says we need to change the way racism itself is viewed through legal and policy frameworks, including international law.

For Ukabiala, ‘the first step is recognising systemic racism in America for what it is: a serious violation of a jus cogens norm, which places an obligation on the international community to act. The second step is to recognise that the most important anti-racism treaty, the International Convention on the Elimination of All Forms of Racial Discrimination, offers a single, elegant weapon to attack almost every aspect of American racism.’

The mass incarceration of minorities also perpetuates the cycle of racism by locking them out of social participation. Ukabiala argues this is all part of a ‘vicious cycle; criminal convictions come with a range of collateral consequences that make it exceedingly difficult to ever escape poverty.’ He adds, ‘a criminal conviction makes it legal to discriminate against a person in employment, housing, voting and all the aspects of life that shape socio-economic outcomes.’

So Black people are among those facing another of the biggest barriers to justice: wealth inequality, perpetuated by cash bail systems, corruption and the cost of legal representation. Alvaro Castellanos Howell is Co-Chair of the IBA Poverty and Social Development Committee (PSDC) and partner at Consortium Legal in Guatemala. He highlights that in countries like Guatemala, there are also cultural and linguistic barriers: legal systems are always in colonial language, and poorer groups may not have access to language translation and interpretation services when needed.

Bryan Stevenson, founder of the Equal Justice Initiative and death row lawyer, once said ‘We have a system of justice in the US that treats you much better if you’re rich and guilty than if you’re poor and innocent. Wealth, not culpability, shapes outcomes.’

Neil Gold, Co-Chair of the PSDC, believes legal aid needs to be expanded and funded more robustly by governments to address the imbalance in quality representation.

Mark Woods is an accredited specialist in family law and criminal law at Tyler Tipping & Woods in Australia. He points out that ‘in advanced jurisdictions with legal aid infrastructure, for every $1 spent by the government on the system, it is likely to save itself $1.48 on government services not used later. To not properly fund legal aid is false economy, as well as unjust.’

Aside from government action, law firms and bar associations can play a role in incentivising more lawyers to take up this work.

Castellanos Howell says that in many countries ‘the culture of legal aid and pro bono work is very low.’ But he and Gold point out that there are often ethical mandates for lawyers to provide pro bono legal services as part of their role in the legal profession. ‘We need to work to build a culture of support, of giving back to society, within the profession,’ adds Gold.


A criminal conviction makes it legal to discriminate against a person in employment, housing, voting and all the aspects of life that shape socio-economic outcomes


Eligibility assessments for legal aid also need to be evaluated. In domestic abuse cases in the UK, women’s rights groups highlight that survivors often cannot access legal aid because it is tied to assets, which include homes in the name of both the survivor and abuser, even if the survivor cannot access those assets.

When it comes to gender inequality, many barriers to justice are invisible and not calibrated into law, like a lack of paid parental leave in the US. The laws that do exist often exacerbate the problem. Some directly discriminate against women, while others enable impunity for gender-based violence.

In England and Wales, only 1.5 per cent of reported rapes resulted in a conviction in 2019. According to the research, one woman who had been raped at gunpoint was told by the Crown Prosecution Service that the weapon ‘was not a threat,’ and that the accused may have thought she consented.

Campaigners argue that rape is being effectively decriminalised, and highlight that rape is already a vastly underreported crime. Victims in many jurisdictions are afraid to come forward, knowing they may not be believed. They are more likely to be stigmatised than the perpetrators, and those that seek justice are often treated like they are the ones on trial.

Victims of sexual violence are not co-prosecutors, but witnesses to crimes against them. So, in most trials, while the defendant has expert legal representation, awareness of the law and how to influence the jury, the complainant, who must also convince the jury to believe her, has nothing.

And the cross-examination can often perpetuate myths about gender-based violence that lead to unjust outcomes.

A report by Rt Hon Sir John Gillen QC PC, a former Lord Justice of Appeal, was published in May 2019 after a high-profile rape case in Belfast. It contains 16 key recommendations. These include legal representation for the complainant from the outset of the case and up to, but not including, the trial. It suggests a more robust judicial attitude and case management approach to prevent improper cross-examination about previous sexual history. Gillen’s report also recommends measures at the outset of the trial to combat rape myths, such as judicial directions to the jury.

In December 2018, the End Violence Against Women Coalition published a report following a survey on public attitudes to sexual consent. A third of people in Britain think it isn’t usually rape if a woman is pressured into having sex but there is no physical violence. What hope is there of changing society’s perception if the law supports such views? 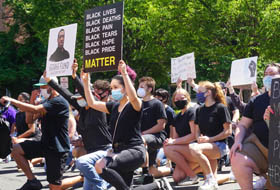 In many jurisdictions, the legal definition of rape doesn’t meet international human rights standards. In late 2018, only eight European jurisdictions had consent-based definitions, according to Amnesty International. In Myanmar, the legal definition of rape is a colonial legacy dating back to the 1861 penal code. Akila Radhakrishnan, President of the Global Justice Center, asks ‘why, in 2020, are we clinging to the standards of 1861?’

Radhakrishnan asks us to look to existing legal frameworks promoting gender equality for solutions. For example, the Convention on the Elimination of all Forms of Discrimination Against Women is a two-part framework that bars discrimination but also requires states to pursue measures towards substantive equality.

And when the law does take gender-based violence seriously, women have more faith in the system. In England, a 2018 experiment by the Nottinghamshire police recorded incidents of misogyny, including violence, as hate crimes or hate incidents. As a result, many more women were willing to report crimes against them.

Radhakrishnan argues for a holistic approach. She says ‘state responsibility for achieving equality is not just about punishment, deterrence is just one piece of the puzzle. We need to educate the whole of society about consent and respect. Children who are abused don’t have the words to describe what’s happening to them. We need to give them the language, and give the next generations the opportunity to change society.’


But the process of changing the law is still currently achieved through amendments to the existing structure. Little things change, one at a time, but we still have to accept the existing framework. Luz Nagle is the former Co-Chair of the IBA Crimes Against Women Subcommittee and Professor of Law at Stetson University College of Law in Florida, US. She says, ‘we are always amending the existing system. But the existing system wasn’t built equitably.’

And part of the problem with trying to address equality solely through legislation is the context in which laws exist. ‘When we try to make positive changes towards eliminating gender-based violence by redefining our understanding of sex,’ says Radhakrishnan, ‘it challenges the core patriarchal structure of our societies.’

The uncomfortable truth is that most legal and justice systems were established with one race, one gender, one class in mind, and have served to ensure the longevity of that power structure. So, to address these problems, we must acknowledge the way our laws and societies were established and therefore perpetuate cycles of oppression and discrimination.

All of these problems are deep-rooted inequalities in society, and all are intersectional, so we need a broad, targeted approach to addressing inequality. As Woods puts it, ‘treatment for minorities is unjust everywhere. Leaving change to common law will mean that it is decades away. How many lives will be lost in the meantime?’

Because society’s values and the law operate cyclically, it is hard to tell which changes first. But, the law can play a leading role in shaping society, and the judiciary and the legal profession have a responsibility to ensure that equality before the law really does mean equality for all. The solutions are out there, and we have the opportunity to act.

Jennifer Venis is Multimedia Journalist at the IBA and can be contacted at jennifer.venis@int-bar.org