In 2015, the UK became the first country to pass legislation to combat modern slavery. Yet, three years later, the Modern Slavery Act continues to attract criticism as other countries step up their efforts to help the estimated 40 million people worldwide that are affected.

A report commissioned by the Winston Churchill Memorial Trust condemned the systems in place in the UK to protect and support victims of slavery and trafficking, saying they were ‘lagging behind’ other countries in Europe, the US and elsewhere. It also criticised the low prosecution and conviction rates for slavery offences. In 2016, only 80 defendants were prosecuted under the Act for 155 modern slavery offences.

This discrepancy is all the more significant when you consider that the Home Office’s own research in July 2018 revealed that slavery costs the UK economy as much as £4.3bn each year. This, it said, puts modern slavery ‘second only to homicide in terms of harm to its victims and society.’ Also in July, the government launched an independent review of the Act, with a report based on its findings expected by the end of March 2019.

The Winston Churchill Memorial Trust’s criticism is correct,’ says Luz Nagle, Professor of Law at Stetson University College of Law. ‘The UK and all countries have failed to provide and sustain adequate support for victims, especially support that is vetted and monitored by responsible and accountable agencies and branches of government.’

Section 54 of the Act – requiring companies with business in the UK, and global turnover over £36m, to publish an annual slavery and human trafficking statement – has come in for particular scrutiny. Companies were obliged to report for the first time in 2017, but there’s mounting evidence many companies have neglected to do so. ‘There have been complaints that many companies still haven’t reported,’ says Clare Connellan, a partner at White & Case in London. ‘The last estimates I saw from the modern slavery registries indicated that several thousand companies had not published any statement at all.’

In October 2018, the Home Office wrote to chief executives of 17,000 businesses, saying they risked being ‘named and shamed’ if they failed to publish a statement by 31 March 2019. Connellan says this latest push could prompt more companies to come clean. ‘The idea is that transparency then drives changes in behaviour,’ she says. ‘A number of companies probably thought nothing was going to happen or perhaps weren’t yet aware of the requirement to report, but companies don’t want to be on a list that names and shames.


Peter Talibart, head of Seyfarth Shaw’s London office and Co-chair of the IBA Employment and Industrial Relations Law Committee, was involved in drafting Section 54. Although it’s often been criticised for lacking clout, he believes it is already having a positive impact. ‘You need to find a way to make the multinationals want to address the problem, keep it in the field and at the same time ensure the multinational is not accepting bloodied goods from tainted supply chains,’ he says. 'That’s the legal thread of the needle that the UK is trying to do with Section 54, although it is already being regarded as a toothless tiger.

Talibart says more countries are looking to follow the UK’s example. ‘Watch this space,’ he says. ‘The Aussies recently passed two Modern Slavery Act 54-based laws. One has just been tabled in Canada. Hong Kong, the Netherlands and Switzerland are also looking hard at this issue. I think we’re going to see a plethora of supply chain transparency laws for human beings over the next ten years. 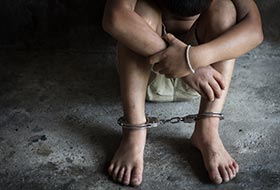 Indeed, in September 2018, the UK, alongside the US, Canada, New Zealand and Australia, established a joint framework of principles by which the five countries can work together to tackle modern slavery in global supply chains.


For all its failings, Connellan believes the UK’s legislation has been a pivotal starting point in getting governments and companies worldwide to talk transparently about their supply chains. ‘The UK’s initial requirements for reporting, although criticised for not having teeth, have been a catalyst for conversations and internal changes in many companies,’ says Connellan. ‘That’s certainly been true for many of the companies that we advise – and the requirement for board level sign-off has been an important part of that engagement, recognising impact and getting visibility over your own supply chain. The question is how much difference it’s making overall, and that’s why I think it’s important to see the outcome of the government’s independent review.

George Brown, a partner in Reed Smith’s European Litigation Group, believes the UK’s efforts in this area are encouraging. ‘It seems to me from the amount of publicity and knowledge of modern slavery and human trafficking that we’re doing more than most in relation to these issues,’ he says. ‘It does get a lot of publicity and it seems to be something, despite Brexit, that the government is putting some of its energy towards.

Brown believes government entities should also be obliged to report what they’re doing to tackle modern slavery. ‘I do think that it shouldn’t just apply to businesses, but governments as well, so enterprises within government should be equally required to provide information,’ he says. ‘There’s also been talk of prohibiting those who fail to comply from tendering for government contracts, but I’m not sure what one would gain from that.

Many law firms are also required to report in compliance with the Act. Although often far removed from the end of the supply chain where slavery and trafficking take place, Talibart says lawyers have a responsibility to do what they can. ‘Modern slavery is already illegal everywhere,’ he says. ‘The traffickers know it, but don’t care. They are winning. It’s growing everywhere. This is a catastrophic failure of the international legal system – lawyers need to be aware of that.