Steps by Saudi Arabia’s Crown Prince Mohammed bin Salman to strengthen his credentials for the throne ventured into unexpected territory in November with the arrest of leading businessmen, government officials and even members of his own ruling family.

According to the Saudi news agency, more than 200 individuals were detained and some 1,400 bank accounts frozen in what was described as an anti-corruption crackdown.

Those arrested include some of the world’s wealthiest people. The list includes billionaire investor Prince al-Waleed bin Talal; Sheikh Waleed al Ibrahim, who owns the Middle East Broadcasting Company; and Sheikh Saleh Kamel, the founder of Dallah al Baraka Group, one of the region’s largest conglomerates.

Bakr bin Laden, head of the Gulf’s largest construction and real estate company, and Mohammed al-Amoudi, an oil magnate, were also detained, along with 17 royal princes and a number of current and former government ministers, among others. Only limited information has emerged about the allegations. 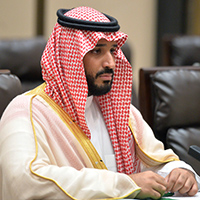 The Kingdom could reportedly net a huge $100bn in recovered cash and assets from those arrested. But, there are concerns that the arrests could damage the Saudi economy in the short term, by undermining business confidence among potential foreign investors at a time when the Kingdom is seeking to develop away from oil.

Many see the arrests as part of a broader, politically motivated move by the Crown Prince, the de facto ruler, to remove potential rivals.

‘These individuals who were arrested have basically been judged by the leadership to be using their wealth in a corrupt fashion,’ said Emma Ashford, a research fellow at the Cato Institute in Washington, DC.

‘[But] we don’t know whether it’s just the Crown defining corruption as something that’s convenient to it.

‘If you look at these arrests, how quickly they were done, the fact that planes were grounded, the fact that the wealth of all these people has been seized and given back to the government, it looks a lot more like a political purge than any sort of anti-corruption programme,’ she said.

What gives credence to such an argument is that the arrests were preceded by two measures. First, largely unexplained mass arrests in September of reformists, intellectuals and scholars who called for authentic political and economic change in the Kingdom. Second, the anti-corruption arrests were carried out by Saudi’s new anti-corruption commission, headed by Crown Prince Mohammed bin Salman himself, only a few days after the body had been formed, whereas the endeavour would normally require months of legal preparations.

Together, the measures are part of a drive for political stability and economic reform in the Kingdom – the main public mission of choice of the Crown Prince. But some warn it could backfire on many levels.

‘We believe that concentrating power in the hands of Crown Prince Mohammed bin Salman should bolster economic and social reform efforts, but heightens key man risk, and a backlash is possible,’ said Fitch Ratings in its analysis of the arrests. The agency added that the arrests ‘increase political uncertainty in Saudi Arabia’ and ‘it is likely to take some time for the implications for the domestic political and policy environment to become clear’.

In a statement, Saudi’s public prosecutor said most of those detained have agreed to settlements to avoid prosecution. There have also been reports that the Kingdom is pursuing measures to force the detainees to give up part of their massive wealth in exchange for their freedom, in what looks increasingly like an opaque legal procedure.

Jamal Khashoggi, a Saudi journalist who used to be close to the royal court under late King Abdullah, agrees that the measures being taken by the Crown Prince are part of an effort to consolidate and centralise power, but says they risk estranging powerful senior members of the ruling family.

Khashoggi, one of the rare Saudi voices who can publicly comment on internal affairs, warned this will only push the Kingdom further away from political inclusion and participation as called for by many reformists. Khashoggi, who was a spokesperson for the Saudi embassy both in London and Washington, DC, is now in self-imposed exile living between the United States and the United Kingdom after being banned from writing his column for the London-based Saudi-owned Al-Hayat newspaper during the initial crackdown on intellectuals and scholars.

Legal experts monitoring events in the country have stressed the need for legal guidelines and due process to be followed amid concerns that the arrests are creating a climate of fear and intimidation that could derail future economic plans and undermine the rule of law.

‘Any step taken to combat corruption is to be welcomed,’ said Stephen Baker, Senior Vice-Chair of the IBA Asset Recovery Subcommittee and a Senior Partner at Baker & Partners. ‘However, in the context of the rule of law, the right to a fair trial is paramount, so for international observers it will be of equal importance that those accused are afforded due process, access to legal counsel and the opportunity to present a full defence before an impartial tribunal. Otherwise, the recent measures risk appearing like an arbitrary exercise of state power.’

In a further development, The New York Times has revealed that Habib al-Adli, the Interior Minister of Egypt under former president Hosni Mubarak, was living in Saudi Arabia and directly advising bin Salman on security and policy steps.

Al-Adli had faced charges relating to corruption and to the deaths of dozens of Egyptian protestors during the protracted political crisis in the country, but his case was dismissed after the military coup of 2013.

Saudi’s Crown Prince has suggested that further action to tackle corruption in the Kingdom is likely. Previous attempts had failed, he said, because they only dealt with ‘small corruption’ – signalling that the crackdown in higher echelons of the Kingdom could continue.

At the same time, an emerging anti-corruption infrastructure could bring further business to Saudi Arabia in the longer term, says Baker. ‘A jurisdiction with a strong tradition for upholding the rule of law has the greatest prospect of attracting inward investment. While recent events may be perceived to have resulted in a period of greater instability, it is to be hoped that the emergence of a jurisdiction with a vigorous opposition to corruption will serve Saudi Arabia well in the longer term. Experience tells us to be extremely cautious in any such optimism.’