What a great year to hold our Annual Conference in Vienna. Given all that has recently occurred in Europe, it could not be more timely. It’s also an outstanding place to celebrate the work of lawyers.

This year marks not only the 800th anniversary of the Magna Carta, but also the 200th anniversary of the Congress of Vienna. In perhaps the first continent-wide congress of nations, historical figures like Metternich, Talleyrand, the Duke of Wellington and Tsar Alexander came together to redefine borders, create new states and establish new systems in an attempt to forge a peaceful balance of power in Europe. Since then, many major diplomatic successes have been achieved in Vienna and, in July this year, the Group of Six successfully negotiated an historic agreement with Iran to stop the development of nuclear weapons and avert a major new conflict in the Middle East.

None of these achievements could have been attained without the painstaking work of lawyers. Lawyers are central to virtually every aspect of society. Through our work, we enable business transactions; we encourage creativity by protecting intellectual property; we facilitate the successful and just resolution of disputes; we create the domestic laws and the international codes without which civil society could not function. Most importantly, lawyers serve as an independent bulwark against excessive power by governments. No other profession devotes as much of its time and energy to public service and pro bono work. We achieve all this through the power and creativity of our reasoning and the integrity of our actions. Too often, however, lawyers are taken for granted or the object of critical jokes. It is incumbent on all of us to explain to the rest of society – no, to shout – the great and important work that we do.

I want to share with you a story that vividly illustrates this. Vijaya Devi spent 19 years in an Indian prison system that had all but forgotten her. Her son, who was born in prison, eventually saved his meagre earnings to provide the £120 bail needed to release his mother. He found a lawyer, Arvind Kumar Singh, who brought the case to the court’s attention on a pro bono basis. Justice Vinod Prasad, who heard the case, stated, ‘we are bewildered as to how a lady was allowed to remain incarcerated in jail for 19 years simply because she was unable to furnish surety bonds’. Justice Prasad immediately freed Ms. Devi, but he did not stop there. He summoned the Advocate General to undertake a review of similar cases. I will be honoured later this year to make Justice Prasad the first recipient of the IBA’s Jurist Award, in which we aim to recognise the ‘unsung hero’ who fosters the rule of law and does so not for personal gain or recognition, but simply because it is the right thing – someone who would not traditionally be recognised by other honours. I encourage all of you to find similar unsung heroes of the law and to let us know about them. We will publicise their good deeds on the IBA website or through the Jurist Award. We should all be proud of Justice Prasad and the many other unsung heroes of the law.

We can also be proud of the many ways the IBA promotes the rule of the law and the development of just, stable and consistent legal systems throughout the world. Every day, through our 70 committees, our Human Rights Institute, our Bar Issues Commission, and the actions of our individual members, the IBA exemplifies the best of the legal profession. I want to thank every committee officer, every working group member, every other individual member of the Association and our highly dedicated staff for this hard work and the success you achieve.

We often praise the work of our large committees. I want to single out one of our smallest: the Indigenous Peoples Committee. On a project funded by the IBA, Colombian and Canadian nationals travelled throughout Colombia meeting with the country’s indigenous people and mining industry officials. The group shared the experiences of Canada’s indigenous people and their road to autonomy and successful relationships with the extractive companies occupying their traditional lands. They hoped that the indigenous people and the mining industry in Colombia could develop a similar, mutually beneficial relationship based on respect and equality. It worked. Each meeting started the same – with apprehension – and ended the
same – with optimism and a clear path forward to a new relationship. I want to commend the Chair of the Indigenous Peoples Committee, Steve Cooper, and his Vice-Chair, Lina Lorenzoni, for advancing the rule of law in this innovative fashion. We can all be proud of them.

Because of the success of the Association, we have been able to invest a million dollars to develop and to operate our ground-breaking eyeWitness to Atrocities app, which we hope will save lives. This app will help bring to justice the perpetrators of atrocities by providing a tool for human rights defenders, journalists, and other courageous citizens to capture verifiable video relating to international atrocity crimes. We can all be proud of this project.

The highest standards of the law and our ability to cause meaningful change are also the driving force behind my presidential initiatives. The IBA is making a lasting contribution to civil society on a large scale by using the remarkable expertise available to us.

The UN estimates that corruption costs $1.25tn every year for developing countries. When corruption occurs in the judicial system, lawyers are usually involved, so the IBA and our bar association members have a special responsibility to work to eliminate it. As part of our Judicial Integrity Initiative, the IBA Legal Policy & Research Unit has worked with the Basel Institute on Governance to develop a survey to understand better how judicial corruption occurs. The many experts with whom we have worked confirmed this type of survey has not been previously undertaken. We will use the results of this survey to develop concrete actions that we can undertake to reduce corruption.

The Presidential Task Force on the Independence of the Legal Profession brings together the expertise of the IBA membership and bar associations to explore the increasing attacks on self-regulation, independence, client privilege and privacy, and to suggest what the legal profession can do proactively to prevent them. In particular, we all need to explain better to the general public why the independence of the bar is important to a free society: if lawyers are subject to government regulation or if they cannot consult with their clients in confidence, we cannot work to protect the rights of citizens against the government. And we all need to continue to speak out when our colleagues’ liberty is threatened when they challenge the government.

When corruption occurs in the judicial system, lawyers are usually involved, so the IBA [has] a special responsibility to work to eliminate it

I have ensured the IBA continues the work on climate change justice and human rights. Our Committees are implementing the recommendations from our ground-breaking report published in 2014, which Mary Robinson called the ‘flagship’ in the field. The IBA has presented its findings and recommendations to various UN and governmental bodies, and we will be doing so again at the UN Human Rights Council. I have also been asked to participate in sessions on human rights during the Climate Change Summit in Paris in December. The IBA’s voice is being heard.

I have also continued the Presidential Task Force on Human Trafficking. I hope all these projects will ultimately improve lives worldwide. We celebrate the 20th anniversary of the IBA’s Human Rights Institute this year. Established in 1995, with Nelson Mandela as its Honorary President, the IBAHRI is now highly respected, with its focus on defending human rights, building legal capacity, undertaking scoping missions and training programmes, supporting justice systems and promoting the rule of law worldwide. The IBAHRI has undertaken projects in over 60 countries. We’re all very proud of what it has achieved in the last 20 years, and we look forward to the significant contributions it will continue to make.

Being in Vienna, we must also take note of the extraordinary human rights crisis now caused by the migration of so many from war-torn areas into Europe. This has caused scenes we hoped would never be repeated. The IBA has urged governments to abide by their obligations under international law towards migrants. Under the 1951 Refugee Convention and 1967 Protocol, national governments must act with due care and responsibility in assessing all asylum seekers inside and at their borders, and ensure they respond to those they determine to be refugees in accordance with these legally binding obligations. I know that these are complex, multi-faceted problems – precisely the types of problems that lawyers are best at resolving, so we must play our role in helping find solutions. We must also meet our responsibility as individual lawyers to assist those in need. The refugees need legal advice on many issues, and I call on all of you to determine what you can do to help, to take action and encourage others to follow your lead.

I want to conclude by noting two documents signed 800 years apart and the lawyers’ role in each. I had the privilege to attend the formal events to mark the 800th Anniversary of the sealing of the Magna Carta at Runnymede on 15 June. It was only because of the work of great lawyers over the centuries that the principles of the Magna Carta have endured as the basis of the rule of law worldwide by limiting the powers of government and enshrining individual rights.

The UN General Assembly has adopted the 17 Sustainable Development Goals that serve as the development agenda for the next 15 years. Goal 16 – to promote just, peaceful and inclusive societies – includes ‘promoting the rule of law at the national and international levels and ensure equal access to justice for all’. It is our responsibility to ensure that this goal is met. I ask all of you to look at all of the SDGs, including, of course, Goal 16, and determine how you and your clients can actively work towards their achievement.

The great American Supreme Court Justice Oliver Wendell Holmes, Jr, said of the law: ‘What a profession it is! Every calling is great when greatly pursued. But what other gives such scope to realise the spontaneous energy of one’s soul? In what other does one plunge so deep in the stream of life – so share its passions, its battles, its despair, its triumphs, both as witness and actor.’ I hope that you enjoy the passion of the law and plunge deeply into the calling that is ours. 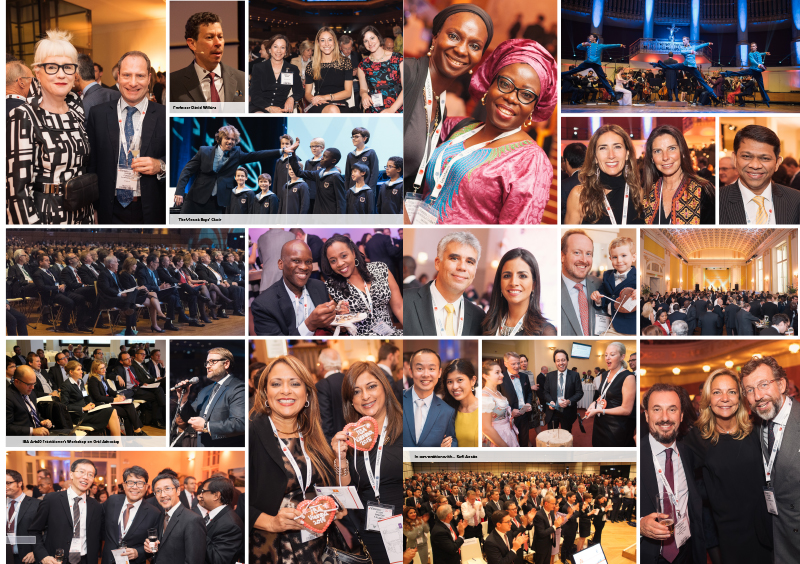