The Attorney General of the United States has led Justice Department investigations that have had significant impact around the world. In her keynote address, she stresses the importance of international cooperation in tackling the major threats of our time.

Before we begin today, I want to address the recent events in Tulsa, Oklahoma and Charlotte, North Carolina. The Department of Justice (DOJ) is assessing the incident that led to the death of Keith Lamont Scott in Charlotte. And we have opened a civil rights investigation into the death of Terence Crutcher in Tulsa, Oklahoma. As always, we will be thorough, impartial and exhaustive in reaching a determination about this incident.

These tragic incidents once again highlight – in the most vivid and painful terms – the real divisions that persist in this nation between law enforcement and communities of colour. In Charlotte, they have once again led to widespread protest, with several instances of violence and 12 police officers and a number of demonstrators injured. Protest is protected by our Constitution and is a vital instrument for raising issues and creating change. But when it turns violent, it undermines the very justice that it seeks to achieve.

At the DOJ, we are working tirelessly to build trust between law enforcement officers and the communities we serve. And we will continue to protect the rights and liberties of every American – no matter who they are, what they look like, or what uniform they wear.

I also want to take a moment to address the latest developments regarding the recent bombings in New York City and New Jersey, where more than 30 innocent people were wounded and countless others were gravely endangered. The DOJ has filed multiple charges against Ahmad Khan Rahami for conducting and attempting to conduct the bombings. These filings reflect our unwavering determination to find, capture and prosecute all those who attempt to commit or commit acts of terror against our nation.

As for today, it is a privilege to join so many distinguished colleagues, devoted public servants and good friends as we reaffirm our shared commitment to fostering international cooperation, upholding the rule of law and promoting justice and human rights around the world. For 69 years, achieving those noble aims has been the mission of the IBA.

That work has never been more important. As information flows ever more freely around the world; as our economies are bound ever more closely together; as the threat from terrorists and cyber actors continues to grow without regard to national or international borders, those of us in the legal profession – especially those of us who serve in government – must acknowledge that our work to protect our people from harm, to fight crime and to secure justice increasingly requires international cooperation.

I would like to talk to you about four areas of the DOJ’s work where this is certainly true: fighting terrorism; strengthening our cyber security; eradicating international corruption; and protecting the most vulnerable among us. Each of these goals is one of my top priorities, and they are all in the core interest not only of the US, but of others around the world. None of them can be achieved by the US alone. They require us to work with other nations to strengthen international norms and to deepen international cooperation – and I am proud to say that in each of these vital areas, we are doing just that.

When protest turns violent, it undermines the very justice that it seeks to achieve

My highest concern is defending our nation and protecting our people – and citizens worldwide – from terrorism.  At the DOJ, we are working tirelessly to detect, deter and disrupt plots that target the US and other nations. We are relentlessly investigating and prosecuting those who seek to harm innocent people. And we are using all of the resources at our disposal to prevent American citizens from travelling overseas to fight with groups like ISIL and then returning home or travelling elsewhere to commit further attacks. Since 2013, we have publicly charged more than 100 individuals for conduct related to foreign terrorist fighter or homegrown violent extremist activity, and have thwarted a number of plots on American soil.

But there are no illusions that we can successfully combat terrorism alone. That’s why we are committed to deepening international ties that allow us to share information, uncover plots and ensure that violent extremists can find no safe haven on our shores or those of our partners.

Through bodies like Interpol and Europol, we are sharing information on foreign fighters and their movements across borders. We have provided a range of resources to Interpol’s Fusion Cell, which tracks terrorist training, planning and financing. We have entered into information-sharing agreements with more than 45 nations to identify and follow suspected terrorists, providing Interpol with profiles on some 4,000 foreign terrorist fighters. And we have helped to establish the 24/7 cyber network, which now has more than 70 members. This rapid reaction system allows investigators to work with internet service providers to preserve valuable digital data before it disappears.

Similar cooperation is essential to meeting yet another modern challenge: the threats in cyber space. Our growing reliance on the internet provides an abundance of enticing targets to wrongdoers – from criminals attempting to steal consumer data, to state-sponsored actors seeking to commit espionage or disable crucial infrastructure, to rogue hackers looking to sow mayhem.

Preventing these incidents before they happen – and bringing perpetrators to justice when they do – requires increased cooperation among nations. The FBI’s Cyber Division recently created three new cyber assistant legal attaché positions: in London, Ottawa and Canberra, allowing us to embed personnel with foreign law enforcement agencies, in order to streamline information sharing and further cooperation. Our Office of International Affairs has expanded the staff of its Mutual Legal Assistance Treaty modernisation project – a critical effort to keep pace with the increasing volume of requests for electronic evidence from foreign authorities. And we are strongly committed to our obligations under the Budapest Convention on Cybercrime, a landmark agreement that established global cooperation on cyber issues as a core aspect of international relations in the 21st century. 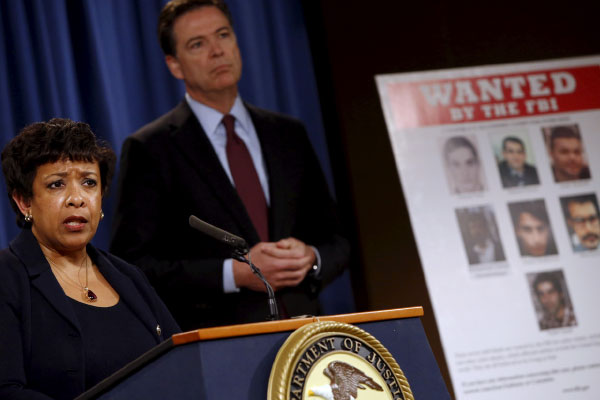 US Attorney General Loretta Lynch and FBI Director James Comey hold a news conference to announce indictments on Iranian hackers for a coordinated campaign of cyber attacks in 2012 and 2013 on several US banks and a New York dam, at the Justice Department in Washington, March 2016.

Working with partners, we have succeeded in a number of notable cyber cases, including the takedown of a number of online marketplaces for drugs, firearms and other illegal goods; the shuttering of more than 200 websites that trafficked in child pornography; and the elimination of the Darkode hacking forum, an illicit online marketplace for cyber criminal tools.

Of course, in all of our efforts to counter both terrorism and cyber attacks, the US is determined to protect privacy and civil liberties. This Administration has taken a number of unprecedented steps to ensure that in our pursuit of security, we don’t undermine the very ideals that we are sworn to protect. In 2014, for instance, President Obama issued a Presidential Policy Directive setting forth new principles for how the US collects signals intelligence. Among other provisions, the directive requires us to review our intelligence decisions on an annual basis, ensuring regular scrutiny of how we safeguard privacy of our people. The directive also extends protections that previously applied only to the American people to people overseas as well. And we have signed an ‘umbrella’ agreement which commits the European Union and the US to protecting personal data when it is transferred for law enforcement and counter-terrorism purposes.

The damage inflicted by international corruption may not be as visible as the harm done by terrorism or cyber incursions, but it is anything but a victimless crime. The DOJ is determined to work with our law enforcement counterparts around the world to ensure that the US offers no shelter for the perpetrators – or the proceeds – of corruption.

In May 2016, we joined with our colleagues in Switzerland to indict nine FIFA officials and five corporate executives for illegally enriching themselves through the corruption of international football. Since then, we have indicted 16 more defendants. In 2010, our Criminal Division established the Kleptocracy Asset Recovery Initiative, which has opened cases involving billions of dollars in criminal assets. Where possible, we use the funds forfeited by the Initiative to benefit the people of the countries who were harmed.

Finally, the DOJ is working alongside our international partners to take a firm stand against one of the most appalling crimes of our time: human trafficking. Ending this heinous practice is not easy: it is a largely invisible crime, which makes it difficult to determine precisely how many millions of men, women and children are in its clutches.

We have taken unprecedented steps to ensure that in our pursuit of security, we don’t undermine the very ideals we are sworn to protect

We have committed to sharing intelligence, combining resources and working through regional and international bodies to tighten the net against traffickers, resulting in operations like that in June 2016 in the Ivory Coast where 25 suspects were arrested and more than 75 children rescued.

Nations are developing more stringent anti-trafficking measures within their borders. Here in the US, the DOJ has joined the Departments of Labor and Homeland Security in launching the Anti-Trafficking Coordination Team Initiative, which assembles specialised units of attorneys and agents from across the federal government to more effectively apprehend traffickers, rescue victims and support survivors.

We have made tremendous progress by working together as an international community – and if we meet our obligations and continue to deepen that cooperation, this progress will only grow. I say ‘obligations’ because, as lawyers, we have a fundamental responsibility to serve justice above all else. And in our interconnected world, serving justice increasingly requires a global outlook. So I would ask all of you to continue to champion these issues in your home countries. That is your calling as lawyers – and that is your duty as members of the IBA.