A report published today by the High Level Panel of Legal Experts on Media Freedom recommends that governments, including signatories to the Global Pledge on Media Freedom, adopt targeted sanctions regimes to ensure that journalists, media professionals and others engaged in journalistic activities can carry out their work without harassment, intimidation, false imprisonment or violent attack.

Authored by Amal Clooney, barrister and Deputy Chair of the High Level Panel, the Report on the Use of Targeted Sanctions to Protect Journalists has been released amid an alarming number of attacks on journalists and media freedom. Statistics from the Committee to Protect Journalists (CPJ) show that more than 130 journalists and media workers were killed in the last two years, and in 2019, 250 journalists around the world were imprisoned ‘for their work’, including an increasing number for allegedly spreading ‘false news’.

Ms Clooney, commented: ‘Targeted sanctions are among the most effective tools in a government’s arsenal to enforce human rights obligations, including the obligation to respect free speech and protect the media. It is the hope of the Panel that governments will look to the recommendations in this report to curb human rights abuses and do more to protect journalists around the world.’

The report has been endorsed by the High Level Panel, the International Bar Association’s Human Rights Institute (IBAHRI) (Secretariat to the Panel), the CPJ, Reporters without Borders, PEN America, as well as the UN Special Rapporteur on Freedom of Expression, David Kaye. It examines the current state of media freedom abuses around the world and outlines the importance of sanctions as a tool to enforce human rights compliance. The report focuses on three sanctions-related issues in its analysis and recommendations that are most relevant in the context of the media, these include: 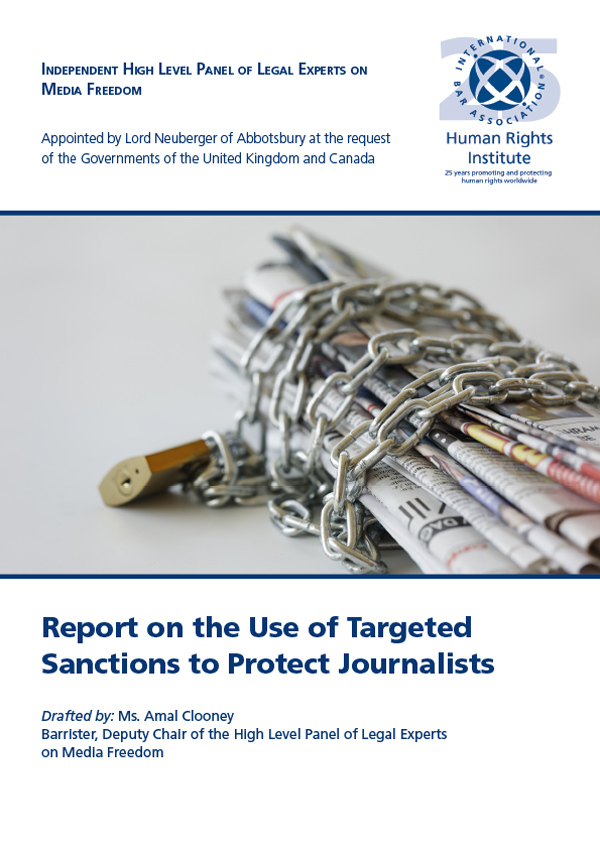 The existing systems of targeted sanctions within Canada, the European Union, the United Kingdom and the United States are reviewed and analysed in the report, which concludes with eleven recommendations, including:

The High Level Panel of Legal Experts on Media Freedom is an independent body convened at the request of the Governments of the United Kingdom and Canada in July 2019. The remit of the Panel is to provide recommendations to governments on how better to protect journalists and address abuses of media freedom in line with international human rights law.

The Panel is chaired by The Rt Hon Lord Neuberger of Abbotsbury, former President of the UK Supreme Court, who stated: ‘A robust and free press is critical to the functioning of a healthy democracy and ensuring human rights around the world. Unfortunately, journalists in every corner of the globe today are facing threats to their freedom and to the ability to do their work. Targeted sanctions offer a powerful enforcement mechanism to address these human rights abuses.’

The publication of the report was marked by a launch event on Thursday 13 February 2020, which brought together Ministers, policy makers, press and thought leaders to discuss the findings and recommendations of the Report on the Use of Targeted Sanctions to Protect Journalists. Organised by the IBAHRI, the event was hosted at Chatham House, 10 St James's Square, London SW1Y 4LE, UK from 1230 to 1345.

Footage of the event will be posted to the IBA website, www.ibanet.org, in due course.