Just over a year ago, to no one’s surprise, US President Donald Trump announced his intention to withdraw the country from the Paris Agreement on climate change. As the world’s second-largest emitter – behind China – the non-participation of the US in the historic 2015 deal has been widely viewed as a potential disaster. But, despite the move, most governments resolved not to waver in their commitment to the deal. Some in the climate community meanwhile called on US states, businesses and citizens to increase their efforts to fill the void.

Now these initial responses have turned into concrete actions and partnerships. In February, the EU unveiled its 15-point plan to make the trade and sustainable development chapters of free trade agreements more effective – including that all new agreements negotiated ‘reaffirm a shared commitment to the effective implementation of the Paris Agreement’. This led to the first trade deal to explicitly mention the Paris Agreement, which the EU struck with Japan in July.

‘It has been quite tough for the Japanese government to keep the momentum going,’ says Kuni Shimada, a consultant at KS International Strategies and a former climate negotiator for Japan, noting that the average citizen doesn’t know much about the details of the Paris Agreement.

Following a tumultuous summer which has seen high temperatures and devastating floods in Japan, Shimada says that people are looking to the government to ‘do something on our behalf’, and points to the free trade agreement as a way to drive the change. He adds that the trade deal with the EU will help lower the costs of the low-carbon transition, dispelling arguments that the Paris Agreement will be a burden to economies.


It’s positive that, in recent years, free trade agreements between regions… go beyond the rhetoric of being supportive of each other’s climate change response


‘The Paris Agreement will create business opportunities for all industries,’ Shimada says. Already, Japan is reaping some of the benefits of the deal, with Shimada reporting that some European financial institutions are looking at moving their capital in Japan out of companies with coal assets and into renewable energy sources.

‘It’s positive that, in recent years, free trade agreements between regions… go beyond the rhetoric of being supportive of each other’s climate change response,’ says Conor Linehan, Dublin-based Head of William Fry’s Environment and Planning Group and Secretary of the IBA Environment, Health and Safety Law Committee. ‘There is detail and granularity about what that means.’

‘It’s kind of a repetition of when the US didn’t ratify the Kyoto Protocol,’ says Linehan. ‘A number of states took cooperative action anyway.’

While the EU is a major driver of these partnerships – having also recently agreed with China to put climate change at the centre of their relationship – other nations are also stepping up. Last year, under the auspices of the Pacific Alliance, the leaders of Colombia, Chile, Peru and Mexico signed the Cali Declaration, committing the four Latin American nations to both promoting green growth and to the Paris Agreement. In July, the presidents of Chile and Costa Rica signed an agreement to develop joint climate change programmes.

The final rules for the Paris Agreement’s mechanisms, including the definition and operational guidance of the cooperative approaches established by Article 6, paragraph 2 of the 2015 framework, are still being drawn up. Peter Zaman, a Singapore-based partner at Reed Smith, says what governments are doing now is ‘keeping the furnace warm’ so they are ready to act once the rules are adopted; the deadline for the final rulebook to be complete is this December. In late August, it was announced that a number of sovereign investors – including Canada, the UK and Norway – are investing in a new $200m World Bank fund, which will specifically target emission reduction programmes in other nations in exchange for Paris-compliant credits, as per Article 6.

‘Part of why people are doing what they’re doing is to defend the Paris Agreement,’ Zaman says. 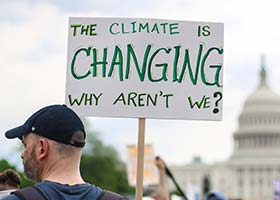 This defence of the Paris Agreement is important, particularly as the EU enters into free trade talks with Australia; the country has recently seen an effort, led by former Prime Minister Tony Abbott, to withdraw from the Paris Agreement.

‘The EU has quite strongly signalled – and not just in Australia, but with all free trade agreements – that they are looking to incorporate sustainable development,’ and the Paris Agreement specifically, says Emma Herd, CEO of the Investor Group on Climate Change, based in Sydney. ‘It’s partly a show of multilateralism, and the power of multilateralism.’

While recognising that the 2015 deal may be lacking in ambition, Linehan states that many governments ‘recognise that it is the best that is achievable’. And, given the ten year lag between the entry into force of the Kyoto Protocol – which itself took eight years to muster enough ratifications – and the agreement of its successor, Linehan doesn’t see parties giving up on it easily. Hence the fight to embed it in other areas. I don’t think it’s a question of regions that are more progressive on climate change, like the EU, forcing others,’ says Linehan. ‘There is a mutual benefit in countries and regions looking at free trade agreements incorporating climate change – they avoid first-mover risks.’

While cooperation agreements help build momentum, Zaman warns, ‘unless you convert that bilateral agreement into something that has legal status… the nature of that cooperative agreement is often very shallow.’