A break with the past?

Colombia’s October referendum rejection of a landmark peace deal was a surprise to many. Global Insight analyses what came next and some of the complexities of conflict resolution.

Even in a year of voting surprises, the prospect of Colombians rejecting a deal to end 52 years of war with FARC guerrillas seemed inconceivable. Yet, on 2 October 2016, the ‘no’ vote won with the narrowest of margins – 50.21 per cent against and 49.78 per cent in favour – highlighting the divisiveness of the peace accord, which promised to bring justice to victims as well as address other contentious issues such as agrarian reform and gender equality.

According to the 300-page agreement, some 5,800 FARC rebels would disband and become a legal political party. Rebel leaders would be granted more lenient sentences and would avoid jail time altogether if they confessed to their crimes. Special courts would also be established to try crimes committed during the conflict.

Internationally, many expressed dismay and surprise, lamenting what they saw as a failed opportunity for Colombians to embrace peace after half a century of bloodshed and the loss of around a quarter of a million lives. The referendum result also marked a stark contrast with the euphoria that erupted a week earlier when 2,500 dignitaries flocked to Cartagena to witness President Juan Manuel Santos and FARC leader Rodrigo Londoño, most known under the nom de guerre Timoleón Jiménez, shake hands and sign the agreement after four years of fraught negotiations in Havana, Cuba.

Veronica Hinestroza, a Senior Programme Lawyer at the International Bar Association’s Human Rights Institute – and originally from Bogotá – believes the plebiscite failed to take account of people’s differing exposure to the conflict. ‘The main reason is that people in Colombia have experienced the armed conflict in very different ways and so I think it was too much to ask people that are not entirely informed about the complexity of the conflict to just make a decision of ‘yes’ or ‘no’ to an agreement that they also didn’t fully understand,’ she says.

Misinformation about what the peace deal was promising certainly didn’t help matters, says Louise Winstanley, Programme and Advocacy Manager at ABColombia. ‘The urban poor for example thought the FARC were going to get a huge amount of money from the deal, when in fact they weren’t,’ she says. ‘It wasn’t a ‘no’ to peace, it’s just that they wanted a better deal and often the information they had about the deal was limited.’

Although the result was extremely close, Winstanley says the low turnout – only 37.4 per cent of eligible voters turned up at the ballot box – is extremely telling and, despite media reports, shows Hurricane Matthew wasn’t the main reason voters stayed away. ‘There’s a real lack of belief in the electoral system that’s very problematic in Colombia and that’s one reason behind the high abstention rate,’ she says. ‘Particularly in rural areas, historically there’s been a lot of vote selling because people don’t think their votes will change anything. Also, in the past when candidates wanted people in remote areas to come and vote for them they always organised transport. This didn’t happen in the referendum and as rural transport costs are very expensive this was a major issue for very poor people living in these areas.’ 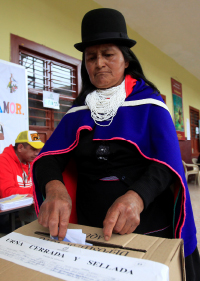 Colombian Guambiano indigenous woman votes in a referendum on the peace deal between the government and FARC rebels in Silvia, Colombia, October 2016.

While the misconceptions and abstentions go some way towards explaining why voters might have rejected the deal, the result shouldn’t take away from what progress has already been achieved. Juan Carlos Rocha is a partner at Philippi, Prietocarrizosa Ferrero & Uría in Bogotá and the IBA Latin American Regional Forum Compliance & Special Projects Officer. ‘The fact that they have managed to come to an agreement marks an important departure from the state’s previous policy,’ he says. ‘The results of the plebiscite could be viewed as condemnation of the terms of the peace negotiations, but they shouldn’t be interpreted as a rejection of the political quest for peace.’

‘The negotiations and signing of the agreement were definitely a huge step towards achieving peace in Colombia,’ agrees Fernando Peláez Pier, former IBA President and a founding partner of Hoet Pelaez Castillo & Duque in Caracas. ‘The agreement is by no means perfect and political interests often don’t correspond with the interests of the public. The fact that it was not approved in the plebiscite represents new challenges for the main parties involved in brokering the agreement, including the ‘no’ voters. I doubt that it will lead to a collapse in the negotiations.’

The next stage – tweaking the deal to address concerns, including fears it could lead to impunity – will be crucial, adds Rocha. ‘The biggest challenge ahead will be coming to an overall national consensus on the most contested issues, leading to adjustments and changes that will be interpreted as sufficient by the majority of people that voted ‘no’. If the changes don’t satisfy most people, the agreement will not be robust, nor will it last long.’

There are concerns that pressure from certain segments of society could risk derailing much of the deal’s potential. ‘Some people say the peace deal is being used to push for other legislation in Colombia,’ warns Hinestroza. ‘They are all for a gender perspective as long as it’s only about women, but there’s a real risk that if certain changes are made to the deal that we may go backwards in areas where we’ve managed to make some advances, such as human rights, women’s empowerment, abortion, reproductive rights, same-sex marriage, LGBTI rights and adoption by gay couples.’

The government must also maintain an open dialogue with victims of the conflict, says Winstanley. ‘Many people have been involved in the construction of these agreements and that includes the victims, and it would be a shame if in the end the final accord wasn’t discussed with victims. Whilst it might open up and include other people, it might end up alienating those that were already supporting it.’

To the surprise of many, just days after the electorate rejected the deal President Santos was awarded the Nobel Peace Prize ‘for his resolute efforts’ to end the conflict. He swiftly donated the $925,000 prize money to victims from the different armed groups – a prudent move given the Norwegian Nobel Committee said the award was also a ‘tribute’ to the Colombian people.

The results of the plebiscite could be viewed as condemnation of the terms of the peace negotiations, but they shouldn’t be interpreted as a rejection of the political quest for peace

The decision to give Santos the award has attracted some criticism, but it’s encouraging that he finds himself in the company of others that have helped steer conflict-stricken parts of the world towards peace, particularly last year’s winner – the Tunisian National Dialogue Quartet – as well as John Hume and David Trimble, who were awarded the prize for their contribution to the Northern Ireland peace process in 1998. ‘When they awarded the Nobel Peace Prize it refocused the attention somewhat back on Santos in a positive way,’ says Winstanley. ‘It also helped to show international support for the peace process that Santos had been engaged in. Both those things are really important.’

Hinestroza agrees the award should help galvanise popular support for the deal: ‘I think people are more likely to see the award as providing an extra incentive for these negotiations to continue.’ Indeed the ‘no’ vote clearly wasn’t the end of the road for Colombia’s peace accord. Six weeks after the plebiscite Santos and FARC announced a revised deal, which includes removing foreign magistrates from special peace tribunals, scrapping plans to include the deal in the constitution and providing an inventory of rebel assets which will be used to compensate victims. Rather than be put back to the popular vote, the new agreement was put to Congress for approval. This was given on 1 December. A decision by Colombia’s Constitutional Court on whether to ratfiy the approval of Congress without a further referendum was due as Global Insightwent to press.

Ruth Green is Multimedia Journalist at the IBA and can be contacted at ruth.green@int-bar.org