Richard Haass, President of the US Council on Foreign Relations - interview

Richard Haass has been at the forefront of US foreign affairs for more than 30 years. He was a close adviser to former Secretary of State Colin Powell, and served in key positions coordinating the Northern Ireland peace process and US policy in Afghanistan. He speaks to the IBA’s US Correspondent, Michael Goldhaber, about the fault lines in international relations and America’s role in the world order.

Michael Goldhaber: In assessing global affairs today, you’ve quoted the poet WB Yeats when he described the state of the world after the First World War. Yeats wrote: ‘Things fall apart; the centre cannot hold.’ Is that a model for our times?

Richard Haass: It was written a hundred years ago, but I think it’s a pretty good model for our times. In the recent elections for the European Parliament, traditional parties associated with the centre, which had dominated European politics for a long time, were weakened, and smaller parties more to the left or the right did better. In the US, in the Democratic Party, you see strong voices on the political left. We’ll see how that plays out. And the Republican Party now essentially moves away from the centre on any number of issues. Even though a plurality of Americans show up as independents, the truth is it’s harder and harder to secure a governing centre. What we see is a much more polarised, divided electorate. We see that manifested in Congress. What we’ve essentially seen is a hollowing out of the centre. There’s all sorts of reasons to account for it – from social media, to narrowcasting rather than broadcasting on platforms like cable television, to how we raise money, to the weakening of political parties.

MG: You’ve observed that the real danger may arrive when we see a coalition between right-wing cultural populism and left-wing economic populism, the way perhaps we’re now seeing in Italy. That could be a very potent combination.

RH: We’re seeing it in Italy, and that’s not an attractive model. I think the problems it will cause for Italy and Europe could be considerable. One could imagine a version of it in France if at some point the yellow vests movement and the former National Front find a way to work together. It’s hard to say exactly who’s who nowadays. And in the US, we’re seeing elements of left and right agree on certain issues. On trade, for example, it’s hard to see differences between the Trump administration and some of the people running for the Democratic nomination. We have to be wary that this kind of anti-establishment mood could invite some strange bedfellows. They may not always agree on what it is they’re for, but they could agree on what it is they’re against. The problem with the politics of agreeing on what you’re against is you tend to disrupt before you come to an agreement on what to replace it with.


There are lots of reasons to be concerned by the trend lines in international relations. One is the revival of great power


MG: You’ve been saying since the last years of the Obama administration that the liberal postwar order is in decline. What do you base your view on?

RH: There are lots of reasons to be concerned by the trend lines in international relations. One is the revival of great power. Competition frictions are potentially worse. US–Chinese and US–Russian relations are far rougher than they were just a few years ago. What Russia did in Ukraine, with the re-emergence of the acquisition of territory by force, is a violation of what many consider to be the most basic law or norm of international relations. There’s also Russian interference in American and European elections. The US is introducing all sorts of tariffs, which is a real threat to the global trading order. And America has now come out of any number of international agreements. Multilateralism is under pressure. Alliance relationships are under pressure. Institutions created after the Second World War are now a bit long in the tooth, and in many cases haven’t kept up with new power balances or new technologies. I could go on.

MG: You alluded to Russia conquering Crimea. Is the US position on these sorts of issues, like Israel’s annexation of the Golan Heights, sending a signal that UN Security Council resolutions aren’t worth the paper they’re written on? 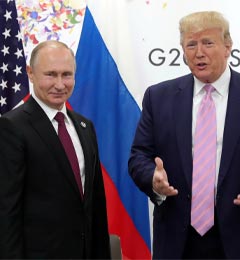 Russia’s President Vladimir Putin and US President Donald Trump attend a meeting on the sidelines of the G20 summit in Osaka, Japan, 28 June 2019. Sputnik/Mikhail Klimentyev/Kremlin

RH: I worry that people in the [Trump] administration aren’t always connecting the dots. In a recent example, we were very rough on China on the 40th anniversary of the Tiananmen Square events. The administration issued tough criticism of China, which is fair enough in principle, but it would have been a lot more impressive if the US had been critical of other governments that have been trampling human rights, including the Philippines, Russia, Turkey and so on. Any time we are selective or inconsistent in our application of principle, we create openings for others, justifications for others. This administration didn’t invent it by the way. It’s interesting to see what the US did against Libya under the Obama administration: situations like that are then cited by someone like Russia’s President Putin as justification for what he then did in Crimea. We have to be really careful about precedents, about inconsistencies, about selective justifications for actions.

MG: You’ve said trade might be an area of stability or resilience. Have you become more pessimistic of late, given President Trump’s brinkmanship on trade with China and Mexico?

RH: There’s been some good news on trade. A few months ago, global trade volume was still up. And even though the US declined to join the Trans-Pacific Partnership, the other 11 countries went ahead and did it. But what we’re seeing now is a much greater use of tariffs to accomplish all sorts of ends, some of which are trade-related, some of which aren’t. Some of these practices are wildly inconsistent with our trade obligations. So I’m more worried than I was because we’re beginning to set in motion steps that others now are emulating to some extent. Even though the world trade order is holding up – it’s robust and does reflect collective self-interest – some recent developments give pause for thought.

MG: Is President Trump as anti-democratic as some of his critics say?


RH: He’s certainly anti-institution and doesn’t seem to have much time for multilateralism. He’s said things that I believe are inappropriate for the president of a democracy to say, in terms of his attacks on the independence of the judiciary and his comments about the media, calling them enemies of the people. He’s also been willing to overlook all sorts of transgressions by others in relation to human rights and democracy around the world.

MG: You’ve noted parallels between President Trump and President Putin, in the personalisation of their rule. I think the point you’ve made is that both Putin and Trump are trying to shut out their own bureaucracies.

RH: President Trump does have a very personal style, though he’s not the first US president to come along and personalise diplomacy. But I don’t think it’s particularly helpful to compare it to Russia. The systems between the two countries are obviously very different. Putin doesn’t really have a bureaucracy anymore. What you see in Russia is the institutionalisation of cronyism. In the US, checks and balances fortunately still exist. But this White House has taken claims of executive privilege to levels we haven’t seen before, ignoring certain congressional requests. So this administration is operating in a zone that in many ways lacks precedents within the US. It’s taken what’s been called ‘the imperial presidency’ to a new level. 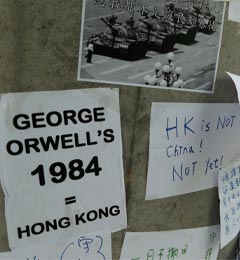 A placard showing a 1989 photo of ‘Tank Man’ from Tiananmen Square is seen among other notes posted on a wall near the Legislative Council Building in Hong Kong, June 2019. REUTERS/Jorge Silva.

RH: The President feels very strongly that the costs of American foreign policy over the decades are not justified and are much greater than the alleged benefits. I disagree about that, but so be it. In terms of trade, he feels the US has been taken advantage of regularly. On balance, I believe trading arrangements are not just of economic, but of strategic, interest. The US, our trading partners and allies have all benefitted. The fact that they’ve benefitted for the most part has not come at our expense. He and I have discussed both of these subjects. All I can say is he feels passionately about it: there’s no political opportunism on these issues. I want to mention something on lack of conviction. A lot of people who ought to be standing up for traditional norms and policies are not. I see it in Congress. There are people who claim to be conservatives who aren’t acting as conservatives. They seem to be putting politics ahead of principle. There are green shoots [suggesting] a degree of pushback against some of the administration’s policies, but so far they’re the exceptions that prove the rule.


On trade, the President feels passionately that the US has been taken advantage of. There’s no political opportunism


MG: How do you think the US courts are performing to check executive power and protect democracy? 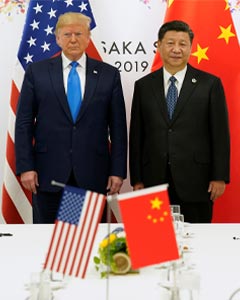 US President Donald Trump and China’s President Xi Jinping pose for a photo ahead of their bilateral meeting during the G20 leaders summit in Osaka, Japan, 29 June 2019. REUTERS/Kevin Lamarque

RH: The courts are the last refuge of democracy, but there’s probably a limit to which they can protect American democracy. The courts are obviously independent, but there’s politics in the courts and the people appointed are human beings. They’re going to exercise their discretion. In foreign affairs, there were certain forms of diplomacy that couldn’t resolve the differences between the US and the Soviet Union during the Cold War. I’d almost say something similar about the courts: don’t ask too much of them. The courts have a role to play. But my sense is that they alone can’t be a substitute for the self-policing of the executive branch, and what other institutions and Congress need to do.

RH: You’re exactly right. As far back as 40 years ago, when looking at the role of Congress in foreign policy, I was struck by the deference the courts showed and their unwillingness often to step into what they judged to be political disputes. With very few exceptions, they were not going to be the ones acting as referee between Congress and the executive when it came to national security.

RH: If history is any guide, they’re going to be extremely careful to avoid that. My sense is, in many cases, they’re going to say this is a political matter, not a legal matter. Those who are hoping or expecting the courts to be the arbiter, to resolve a lot of the frictions in our democracy right now, are likely to be disappointed. Either because of the political views of certain people sitting in the courts, or their views on where they ought not to go, the courts are going to push it back to the politicians and say, ‘you were elected, you solve it’.