Pic: A woman bathes her child in the open next to remains of her home in the Baghdad settlement in Angola’s capital Luanda, 28 July 2009. REUTERS/ Henrique Almeida.

The age-old story of grotesque corruption, state capture and Western complicity has repeated time and time again across Africa for generations. The latest revelations about Angola are simply another abject example of rule of law failure.

Angola should be a wealthy country by virtue of its large oil deposits. Instead, most people do not survive beyond 60 years of age and five per cent of babies do not live to see their first birthdays. Angola is among Africa’s poorest countries, its wealth swallowed by extraordinary corruption, largely within one family: that of former President José Eduardo dos Santos.

After an enormous leak of documents and subsequent investigation, the International Consortium of Investigative Journalists has uncovered a web of corrupt activities largely surrounding dos Santos’s daughter Isobel, said to be worth $2bn in her own right. This money, it is now thought, was largely gained at the expense of the State. This has been denied by Isobel dos Santos.

The ‘Luanda Leaks’ show how, through her deals, Isobel dos Santos ended up as Africa’s wealthiest woman and left Angola impoverished. A web of 400 companies and subsidiaries in 41 countries, including the US and various offshore secrecy jurisdictions where requirements of clients are respected, are linked to Isobel dos Santos and her husband Sindika Dokolo. 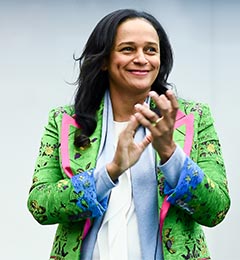 The documents also describe the role of large Western companies in assisting the process of moving the money and effectively stashing the millions of dollars safely away from prying eyes. These companies should have known the problematic nature of these deals, but avoided any scrutiny.

An independent Angola had a rough start. It was colonised by the Portuguese and when that period ended it found itself bogged down in decades of civil war. When it finally settled down under the rule of one of the warring parties, the MPLA, and its leader, President dos Santos, life for Angolans should have improved.

Instead, the state-owned oil company, Sonangol, and various other entities effectively became the personal piggy bank of the dos Santos family – particularly Isobel – who grew a large business empire from money looted from Sonangol, her father having installed her at its helm.

The Luanda Leaks consisted of over 700,000 documents and interviews. They reveal the way thieving rulers and their family members are moving ill-gotten public money to tax havens, often with the help of Western financial institutions and law firms. From there, the money is used to buy up properties, businesses and other valuable assets, or it is simply hidden away, safe from tax authorities and criminal investigators. This, sadly, is nothing new. One of the first documents to come to light via WikiLeaks, after it was first set up, revealed the same pattern in Kenya relating to the ruling arap Moi family.

The trove of leaks hit the headlines while Angola’s ally of old, South Africa, was dealing with some significant skeletons in its own closet (see Global Insight Feb/March 2020). This kind of corruption, involving huge amounts of money, cannot successfully take place without the help of Western banks, lawyers, accountants and major consultancies. These companies assist in the laundering of money, the setting up of offshore entities with good secrecy and tax breaks and the moving around the globe of money and other assets.

In February, a non-government organisation called Open Secrets formally asked the Judicial Commission of Inquiry looking into South African corruption – the Zondo Commission – to look at several major companies which it says are implicated in corrupt activities in South Africa. The Luanda Leaks focus on the contracts and other documents implicating companies in the corrupt activities of Isabel dos Santos and her husband, who is from the Democratic Republic of Congo.


It is not yet clear what the present Angolan government is going to do to address the problem. For now, the current President – who fired Isabel dos Santos from her role at the oil company and who is looking to eradicate corruption – has asked Portuguese banks to freeze dos Santos’ business accounts. The banks have complied with this.

Dr Justin Pearce, an expert on Angola currently conducting research at Sussex University, believes Angola will try to get its money back. ‘She has a lot of assets in Portugal,’ he says. According to Pearce dos Santos’ method was to acquire shares in several companies linked to the State, which she gained access via her privileged family status. Pearce says her transactions were not accompanied by proper procedures like tendering processes.

Dos Santos currently lives in London where she has several properties and where she has previously studied. Her mother is Russian and she has Russian citizenship, according to Pearce. He does not see the British sending her back to Angola and believes she is most likely to want to stay in the UK at the moment.

This is despite the fact that she has been quoted saying that she would like to return to Angola and stand for President in an election. ‘What the Angolan authorities appear to be doing,’ says Pearce, ‘is selecting for investigations the most egregious examples of money taken directly from the State rather than from the companies that are not held directly by the State.’

Even if the British moved against her, Pearce notes, she could move to Dubai, where she has other assets. Dubai happens to be where South Africa’s bête noire – the Gupta family of Indian origin – are believed to have taken up residence with their allegedly ill-gotten gains. They are said to have been among the major beneficiaries of South African corruption. Pearce imagines a future where Isabel dos Santos, and South Africa’s former president Jacob Zuma, live as near neighbours in Dubai.

Dos Santos rejects the claims against her and says the Luanda Leaks papers are the result of political persecution against her.

Pat Sidley is a freelance journalist and can be contacted at pattykate@icon.co.za