Hong Kong stands up for the rule of law

In their acceptance speeches for the 2019 IBA award for Outstanding Contribution by a Legal Practitioner to Human Rights, joint recipients Dr Margaret Ng and Martin Lee SC JP highlighted the importance of defending freedom, democracy and the rule of law.

Margaret Ng and Martin Lee have both demonstrated tireless dedication to the protection of human rights and the pursuit of justice and democracy in Hong Kong. Lee, often referred to as Hong Kong’s ‘father of democracy’, served on the Drafting Committee for Hong Kong’s Basic Law, helping to shape what would become the territory’s post-handover constitution. Ng was one of the founding members of the Basic Law Article 23 Concern Group. She continues to fight against restrictions of civil liberties in Hong Kong as a member of the renamed Basic Law Article 45 Concern Group – a pro-democracy group.

Margaret Ng on fighting for freedom

‘I come to these awards with great embarrassment, being conscious of so many people who deserve to be noticed and prefer not to be noticed because they want to get on with their work.

I am impressed by all the members of my profession in Hong Kong. I was in the Hong Kong legislature for 18 years, both before and after the handover, and we had only one mission in mind: ensuring the safe transition of the rule of law.

I could not have done my job in the legislature but for the fact that the profession was always behind everything I did, including Martin Lee. 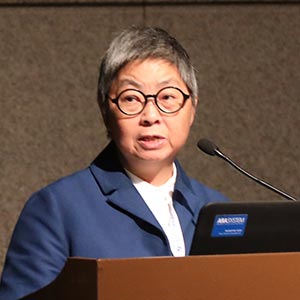 I came to democracy reluctantly. I did not want to be involved in fighting for elections and so on. My job was to preserve the rule of law. But very soon I recognised that unless we fight for democracy, there is no protection for freedom. As you can see from the most recent protests in Hong Kong, when you have a very powerful country that is suspicious of individual freedom, then it is quite a job to protect it.

The events in Hong Kong are critical for the rest of the world because we have a constitution that begins with recognition of freedom and recognition of rights, and yet this can be stifled overnight.

I am humbled. I know how many people are making sacrifices, particularly our young people. They are prepared to sacrifice their lives for freedom. I am only one of the worker bees in this whole hive.

I am very proud and very grateful for the award. But I also feel that the award should really go to all those people who are prepared to go to such extremes to fight for freedom. Thank you very much.’

‘When I received an email asking me if I would accept this award, my first inclination was to say no because I wanted to stay with my people in Hong Kong, fighting for freedom, autonomy and democracy. Then I changed my mind. There are so many young lawyers out there in Hong Kong, sacrificing their time and energy… so I came here to collect this prize on their behalf. 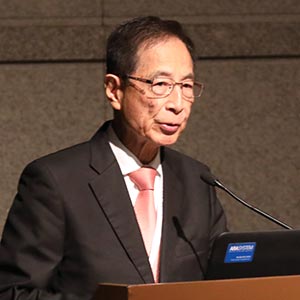 I fought for democracy and the autonomy of Hong Kong for 35 years, always in a peaceful manner, and I was ignored all that time. How many governments in the world actually did anything for Hong Kong during those 35 years?

The young people have said to us, ‘We support you, but we’re doing it our way. We’re taking the more risky route, the more direct route. Don’t join us if you don’t want to. But please understand us.’ They are prepared to sacrifice ten years of their young lives – that’s the penalty they’re looking at if they are convicted of riot. Some of them even wrote out their wills before they participated in these demonstrations. They are prepared to sacrifice their young lives for us, so how can we condemn them?


The other side, the police, is committing violence against the protestors and our government has done nothing to stop it, not even condemning such violence. They are damaging the rule of law because they don’t allow these people to be brought to the courts. The police actually don’t wear numbers anymore when they effect arrest. So how can you identify them? How can you even make a complaint to have them arrested? The government is damaging the rule of law but it’s students who are arrested and brought to court.

Whenever a young person is arrested, all that is necessary for that person to do is to shout out their name and the lawyers will come to them. That’s how much our lawyers are helping to establish and to keep the rule of law going in Hong Kong. Thank you.’

‘In 1998, when the question came up as to whether there would be an extradition arrangement between Hong Kong and China – we call it rendition, because it’s not between sovereign states – what agreement could we come to?

There was no arrangement at all for any person in Hong Kong to be extradited to China for trial or punishment, because the system in China was totally different from that of Hong Kong. The foundation of the Joint Declaration and the basic law providing ‘one country, two systems’ ensured that Hong Kong people, provided they abide by the law in Hong Kong, are protected. The Legislative Council of Hong Kong made it very clear that there would be no rendition without fair trial according to internationally recognised standards. 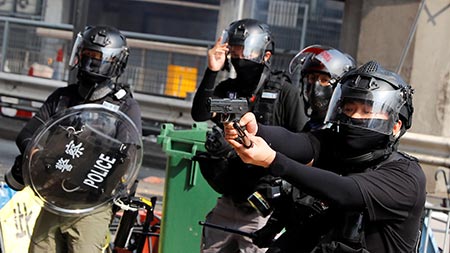 Then, in February 2019, the Hong Kong government introduced the extradition bill, allowing them to extradite a person in Hong Kong to mainland China for trial and punishment. By March, the Hong Kong Bar Association had made a very detailed explanation of why this was not right for Hong Kong, and why this threatened the rule of law. The government refused to consider that opinion.

Many in Hong Kong were very worried about the removal of a fundamental protection against the system in China. We also saw that it undermined the international status of Hong Kong as a business centre, because so many countries come to Hong Kong to do business under the assurance that our system is self-contained.


We went around the world to alert people to the effect of this bill, and particularly the UK and the Canadian bars came to our assistance to explain why the bill, as proposed by the Hong Kong government, was not sufficient to protect human rights, particularly the rights to a fair trial and the rights to freedom from torture. None of this moved the Hong Kong government.

So on 28 April, 130,000 Hong Kong people took to the streets to protest this bill. The Hong Kong government then made it clear that it was going to introduce the bill very soon. The whole legislative procedure was being undermined; it was an abuse of due process.

Now, if the bill was so seriously undermining Hong Kong’s interests, why should an elected legislature be willing to pass that bill? That highlighted that our legislature was not democratic. The majority of it has to work under the bidding of the China liaison office and not the Special Administrative Region (SAR) government.

On 9 June, a million people marched. The protest was cross-generational and cross-spectrum between radical and moderate. The Chief Executive Carrie Lam’s response was to state that the plans would continue as before. She was not even going to pause.

On 12 June, a lot of young, ordinary people, went to surround the Legislative Council building. The only thing they could do was physically to stop the Legislative Council from holding the meeting and carrying on with the procedure. The anti-riot police squad was out in force. A lot of tear gas was fired, as well as beanbag pellets, rubber bullets and pepper spray.

That day marked a very, very important point. It showed that if not for people who were prepared to interpose their own physical safety and their liberty between the law and their freedoms, the bill would have been passed.

“Unless we fight for democracy, there is no protection for freedom

On 15 June, the Executive said they would temporarily suspend the work on the bill – it would be postponed. The next day, two million people marched. Then, on 1 July, we saw the Legislative Council being stormed by the protesters.

On 29 July, Beijing gave the direction that disturbances must be quelled at all costs. So in August, the police force escalated. Police brutality came as a shock to Hong Kong people, because the Hong Kong police were supposed to be one of the finest in Asia, with laws to govern the use of force.

The story of these protests in Hong Kong shows you that when democracy is denied, the rule of law is at risk of breaking down.

You see a lot of pictures of violence, of fires being set and so on. But when you take away people’s rights, when they can no longer expect justice to be done by those who are in government, then they have to take up arms.’

This is a heavily abridged version. The full speech and showcase session can be viewed at tinyurl.com/ibaseoul