Serving as Deputy Assistant Attorney General under George W Bush, John Yoo authored the ‘Torture Memos’ that provided the legal basis for US detention and interrogation policies following 9/11. Here, he assesses Donald Trump’s early days in power and says the use of executive orders is damaging his presidency.

Michael Goldhaber (MG): You’ve written about how being born in South Korea influenced your position of being in favour of a strong executive. Tell us more.

John Yoo (JY): My interest in presidential power came about because my family moved to the United States from Korea in the mid-1960s. I was always conscious of the Korean War, and the US intervention in 1950 that prevented South Korea from becoming a communist country. And seeing the misery of people who live in North Korea now makes me especially conscious of the benefits of executive power.

The constitutionality of the Korean War is one of the great issues among constitutional lawyers who study war powers. If President Harry Truman hadn’t taken decisive action and acted quickly; if he’d waited to ask Congress for permission for a declaration of war, I could well be living in North Korea right now.

MG: And yet you’ve criticised President Trump’s early use of executive power. Why is that?

JY: I was trying to raise something that I hope was more cautionary: that he’s gone too far and that it’s harming his presidency. If he could come to a better conception of the purpose of the office and the nature of executive power, it would stabilise his administration.

There are things that worry me. For example, the President has said that he’s going to build a wall along the Mexico-US border and then charge Mexico for it by imposing a trade tariff, or a tax of some kind on financial transfers to Mexico from the US. I think, under the Constitution, that’s outside the power of the president.

MG: And the most controversial executive order, the travel ban signed in January 2017, do you think this also goes too far?

JY: Parts of it do; parts of it don’t. If you look at the statute that’s involved, the Immigration and Naturalization Act, there are two provisions that conflict. One says the president has the authority to block entry of, as the statute puts it, any class of aliens that’s defined by the president. So that would seem to support the legality of the travel ban order. But the Immigration and Naturalization Act also has a fairly broad provision saying that immigration laws cannot be used to discriminate based on national origin.

Personally, I would say the statutory conflict would come out on the side of the president, but then there’s a constitutional difficulty that the president, in the face of the executive order, doesn’t talk about religion.

However, President Trump said on the campaign trail before he took office that he was interested in banning Muslims from entering the US. I think that would raise serious problems under the First Amendment: both the free exercise right of religion and also the prohibition on the establishment of religion.

The problem the courts in the US are wrestling with is how far are judges allowed to look behind the face of the order and question the motive of the President, which is something the courts generally are reluctant to do.

MG: It’s not only you. Former Vice-President Dick Cheney and others who were very senior in the George W Bush administration, and associated with some of its most controversial policies, seem to be appalled by this executive order. Perhaps it’s also counter-productive as a matter of terrorism policy, and outside the mainstream of American values?

JY: There’s two different points there. Does it make sense, as a counter-terrorism policy, to ban immigration from these countries? I don’t think it does, and I think a lot of counter-terrorism experts would agree. Also, it’s too easy to get around. If ISIS or Al Qaeda want to slip operatives into the US [while the ban is in force], you just pick someone who’s got a passport from a country that’s not affected.

The better thing to do is to engage in close scrutiny of people coming from countries where you’re worried about terrorist infiltration and the flow of people coming in, rather than trying to just block off whole countries. The ban also prevents the US benefitting from cooperation with more moderate people from those countries, who might help identify and track down people trying to get into the US.

In terms of broader immigration policy, up until 1965 we had quotas for specific countries. It weighted in favour of Western-European countries and basically cut off immigration from other parts of the world. We decided to do away with that. There’s lots to talk about in terms of what’s the best way to allocate immigration slots, but we don’t want to return to national quotas.

MG: I’d like to pick out the two presidents that may resemble Trump the most: Andrew Jackson and Richard Nixon.

JY: Jackson’s presidency is almost defined by his conflict with the courts: the Supreme Court and Chief Justice John Marshall in particular. This goes to your point about the parallels with Trump. Jackson represented a kind of revolt against what he thought of as the northeastern elites in Boston, New York and Washington, and the courts. He was the first president to portray himself as a ‘small d democrat’ – someone who represented the people.

A famous quote from Jackson is: ‘Well, Chief Justice Marshall has rendered his opinion, now let him execute it’, which has been taken ever since for the idea that the president can refuse to enforce a judicial decision if he has a different view of the Constitution. I think Jackson was much more thoughtful than Trump about his attitude towards the courts, but it does have the same level of hostility and doubt about the legitimacy of judicial review.

MG: What are the lessons for today? Doesn’t it show the limits of judicial control in the face of a president who can more or less plausibly claim popular mandate?

JY: This goes back to these fundamental questions we have in our constitutional system about how far does judicial review run when, as one of the founding fathers of the US, Alexander Hamilton, said: the judiciary doesn’t have force or will behind it, it only has judgment. By that he meant that the courts don’t control the sword, they can only persuade the other branches, and ultimately the American people, to agree and carry out what they want. 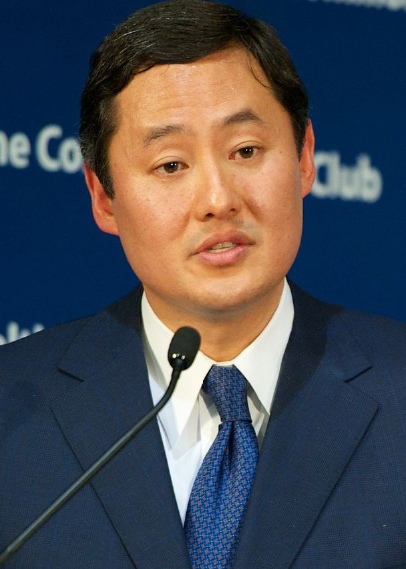 John Yoo is a lawyer, law professor and author of Crisis and Command: the History of Executive Power from George Washington to George W. Bush. He served as Deputy Assistant US Attorney General at the US Department of Justice from 2001–2003, where he worked on issues involving foreign affairs, national security and the separation of powers.

There are similar sounds coming out of the Trump administration today, about ‘so-called judges’, or judges being ‘disgraceful’ in their opposition to his travel ban, or Trump aides saying that judges are not allowed to question the president’s power over immigration law.

But with Trump, I worry about the intention behind the travel ban executive order, if it’s really there to almost retaliate against certain immigrants because of their religion. I don’t think it has the same noble purpose as Jackson had about keeping the Union together.

MG: What about similarities with President Nixon?

JY: Presidential power fluctuates and expands based on the circumstances – war, emergencies, crises – but during periods of stability without external threat, presidential powers ought to recede. One of the failures of bad presidents is that they don’t understand the circumstances they’re in. They might be in a period of crisis and they don’t step forward, like James Madison or James Buchanan. Or, as with Nixon, they are no longer in a period of crisis, but they try to invoke the broader powers of the presidency out-of-step with the times.

Nixon made claims that the president can do no wrong, but I think those were mistaken because there was no emergency or crisis to which he was responding. He was taking tools that are really for the defence of the country and aiming them domestically.

The travel ban order is similar. Trump is claiming a national security emergency, essentially, with immigration into the US, and claiming a right under statutes, but also keeping from the courts any explanation of why he’s issued the order.

There’s no emergency about immigration. Immigration has always been under the constitutional authority of Congress. If we were in a war, I would think the President could block people from coming into the country. There are various statutes which allow him to do that. But we’re not in a war with these countries.

To me, the overall similarity between Trump and Nixon is not constitutional, it’s political. Trump is claiming he represents a forgotten majority in the country, and he thinks it gives him some kind of leverage to make claims about situations which then invoke great presidential power. That was a fault of Nixon.

MG: Congress, both through its investigation and its impeachment powers, is the ultimate check on the executive. How do you view it?

JY: Congress has plenty of constitutional powers to restrain an executive – if Congress has the institutional will to use them. That’s really the question. If Congress wanted to turn around Trump’s travel ban order, it could do that in a simple, one-sentence statute.

Congress can stop the building of a wall; it can prevent withdrawal from the North American Free Trade Agreement. So Congress can check a lot of presidential power, even before you start to consider something as serious as impeachment.

On that subject, I’m in favour of much broader use of impeachment. If you go back and look at what the writers and ratifiers of the Constitution said about impeachment, it was originally seen as something that would be more widely used. But, over time, we’ve narrowed it to this idea that you have to commit a crime as president in order to be impeached. I think Congress initially would have been allowed to remove presidents for being bad at being president, for maladministration, or just because they had serious constitutional conflicts.

MG: Your final observations on Trump’s early days in power?

JY: It’s incredible how much controversy accompanied just the first few weeks of the administration. Trump hasn’t been doing a good job in navigation or cooperating with Congress, but I think he was still hungover from the campaign. After campaigning on this idea of ‘draining the swamp’ in Washington, it’s hard then to come in and work within the system.

He certainly doesn’t see his modus operandi to be working within the regular channels of power in Washington, but I think that’s a mistake because he has to work with Congress to achieve a lot of his agenda. He can’t cut taxes and get the economy growing by himself. That’s really only something Congress can do, and that’s what his re-election is going to hinge on.