Trump was impeached by the House of Representatives in the last days of his presidential term after a mob of his supporters stormed the capitol on 6 January, seeking to stop the formal confirmation of President Biden’s election victory. 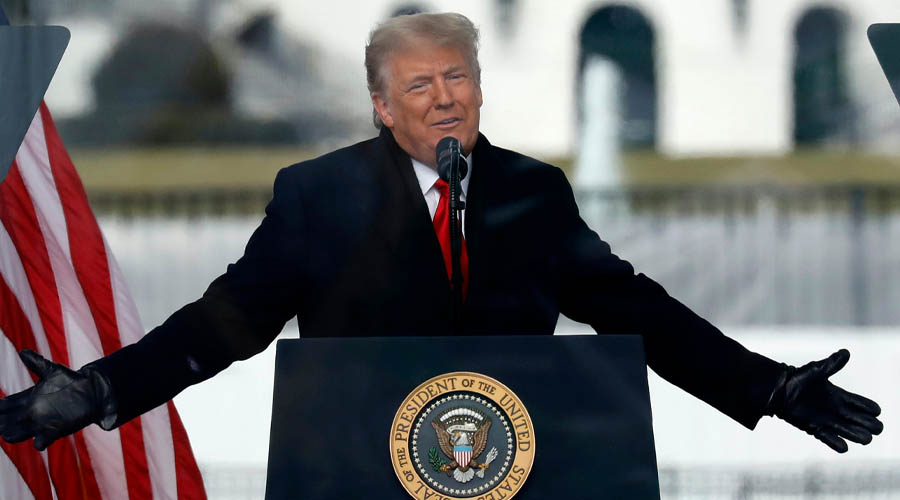 President Donald Trump speaks at a rally near the White House, shortly before his supporters stormed the US Capitol Building in Washington, 6 January 2021. Shutterstock.com / mccv

Senate Minority Leader Mitch McConnell declared that ‘there is no question that President Trump is practically and morally responsible for provoking the events of that day’.

‘The people who stormed this building believed they were acting on the wishes and instructions of their president’, he said. ‘And their having that belief was a foreseeable consequence of the growing crescendo of false statements, conspiracy theories, and reckless hyperbole which the defeated president kept shouting into the largest megaphone on planet Earth.’

Yet McConnell voted to acquit Trump, claiming the Senate ‘is not invited to act as the nation’s overarching moral tribunal’ when an official had already left office. But McConnell himself – while Senate Majority Leader in January – had ensured the trial did not begin until President Biden was sworn in.

The path to unity flows through accountability, pure and simple

After the acquittal, Republican Senator Lindsey Graham told Fox News that McConnell did not represent the views of most Republicans, the majority of whom stand by Trump’s behaviour. ‘The Trump movement is alive and well’, he said.

Wade McMullen is Senior Vice President of Programs & Legal Strategy at Robert F Kennedy Human Rights. For him, Trump’s Senate conviction would have been ‘absolutely necessary, but nowhere near sufficient’.

He highlights that Trump ‘didn’t do this alone. He had many enablers in the Senate, in the House of Representatives, from officials all around the country, from law enforcement and security officers. We need accountability for Trump, but also his enablers and those complicit at every level, not only for what happened on 6 January, but what enabled that day to take place’.

In his opening argument, lead impeachment manager Representative Jamie Raskin claimed that Trump’s team were trying to create a ‘January exception’, meaning that ‘if you commit an impeachable offense in your last few weeks in office, you do it with constitutional impunity’.’

The prosecution was only able to persuade two more Republicans to join the five already in favour of conviction. To convict, they would have needed 17 Republican senators. This was reportedly the shortest impeachment trial in US history, but also the most bipartisan – no president has ever had seven of his party turn against him in this way.

In choosing to acquit Trump, some Republicans were also shielding themselves from scrutiny, having directly supported Trump’s election fraud claims and encouraged supporters to rally at the Capitol that day.

Convicting Trump was also politically dangerous for Republicans. Although polls suggested most US citizens supported Trump’s conviction, Trump’s legacy is a frenzied support base, and the seven Republicans who voted for conviction faced a backlash from Trump supporters. Louisiana Senator Bill Cassidy was censured by his local Republican party for voting against Trump.

But Matt Kaiser, Vice-Chair of the IBA Criminal Law Committee and a partner at KaiserDillon, doesn’t think ‘the audience Jamie Raskin and the other impeachment managers were talking to was primarily the Republicans who are never going to vote to convict in the Senate. I think the audience is the broader American people and to a larger extent, history’.

During the trial, the prosecution played extensive footage of the attack, mapping the timeline alongside Trump’s behaviour that day, to show how close congresspeople came to meeting the violent mob, and how long it took then-President Trump to call his supporters off.

The prosecutors also revealed new evidence suggesting Trump should have been aware of the direct and imminent danger to his Vice President, Mike Pence, whom some rioters were allegedly seeking to assassinate as a ‘traitor’.

Raskin was keen to highlight the danger that had been posed not only to officials and Capitol police – a number of whom died in the aftermath of the event – but to democracy itself.

That forensic record of what happened, how the US got there, and how impunity reigned, lives on.

Kaiser says there are still several ways to hold someone in Trump’s position accountable, including criminal prosecution and civil suits. The former president is already facing a number of other investigations at state and federal level. Meanwhile, a broad criminal investigation into the insurrection is underway.

‘There are also other measures Congress could take. Congress could vote to censure Trump and, as part of that, determine that he is not allowed to hold office in the future because he incited an insurrection’, Kaiser adds.

However, he says impeachment would have been the most credible option, as it would have required a strong bipartisan majority. ‘If he is censured or Congress takes an action by a simple majority, that’s harder as a matter of political credibility because although it might get bipartisan support, it wouldn’t be a supermajority.’

Still, to Kaiser, acquittal was all but inevitable in light of ‘the nature of our very partisan politics at the moment’.

‘The big problem we have in America that degrades the extent to which there is a viable check on presidential power from impeachment, is that we just don’t as a people agree on common facts anymore’, he says. Even though impeachment is inherently a political and not judicial process, he says ‘if people are dealing with a shared set of facts, it should work out right’.

Trump’s legal team perpetuated his claims of election fraud during the trial, although almost 60 legal cases claiming fraud were dismissed by US courts in the months since the November presidential election. Some senators also continue to support Trump’s claims, and many argued impeachment should be dropped in favour of ‘unity’.

For McMullen, ‘the path to unity flows through accountability, pure and simple’.

‘It is precisely the lack of accountability for the white supremacist and racist origins of this country and our political structures that is the why and how we provided the platform, the culture, the resonance for someone like President Trump to do what he did in his presidency and even just in the last two weeks’, he adds.

Kaiser isn’t sure what will help the US recover. ‘I read a lot of arguments about what’s best to heal the country, and I’m not sure how to evaluate those but I’m pessimistic at this point that anything could heal the country. I think we’re at a moment in our history where pretty much anything is going to be divisive.’