Presidential pardons and the law

Heads of state must weigh their words, and check with lawyers, before apologising for a country’s historic transgressions and injustices. Global Insight assesses the perils for presidents and prime ministers playing politics with history and the law.

In February, Frank-Walter Steinmeier was elected president of Germany. One month later, the country was taken to court. Five years ago, when Steinmeier urged his government to confront atrocities perpetrated in colonial-era Africa, he had no idea that, when he urged them to confront ‘this traumatic part of our national history’, it would land Germany in a Manhattan courtroom facing charges of genocide, with potential damages in the tens of billions of dollars.

In March 2012, while serving as leader of the Social Democratic opposition in the Bundestag, Steinmeier confronted his fellow parliamentarians with a starkly worded proposal: ‘The Bundestag acknowledges that German colonial troops were guilty of serious crimes against the Herero, Nama, Damara and San, and emphasises, as historians have long proven, that the war of extermination in Namibia from 1904-1908 was a war crime and a genocide.’

At the time, the president, the chancellor and foreign minister opposed any official apology, as did the Christian Democratic majority in the 630 seat assembly. The Steinmeier proposal was rejected by a simple majority vote.

Three years later, following Steinmeier’s appointment as foreign minister, and amid clamorous demands by Namibian tribal leaders for an official apology and financial reparations, a foreign ministry spokesman was asked, ‘Is it clear to Mr Steinmeier, that this was a genocide?’

The spokesman reaffirmed the Steinmeier position. The reporter recalled the Bundestag ‘no’ vote, then asked, ‘What is the official position of the Federal Government? Was it a genocide?’ And more, would there be an official apology? The spokesman prevaricated. He confirmed Steinmeier’s position, and spoke of constructive dialogue – sehr konstruktiv – between Germany and Namibia. He asked for patience – geduld.

Namibian tribal leaders appealed directly to Joachim Gauck, then Federal President. A few days after the press conference, they visited the President’s office with a petition, ‘No Statute of Limitations on Genocide’, but were told the President was not available. They departed without a meeting. On 14 July 2016, President Gauck sent a letter to his Namibian counterpart in Windhoek officially acknowledging the genocide, but with a qualifier: ‘The mere use of term genocide does not mean any additional legal obligations for Germany,’ the presidential envoy explained. ‘Germany has political and moral obligations to heal the wounds of the past, but is not legally obliged to pay reparations.’

On Thursday 16 March 2017, just one month after Steinmeier had succeeded Gauck as president, Nambian tribal leaders appeared in the United States District Court in New York City for a preliminary hearing on a class action law suit against the Federal Republic of Germany. Under the Alien Tort Statute, a US law dating from 1789, non-US citizens are permitted to file lawsuits for torts committed in violation of international law. The lawsuit claimed that Germany had violated the 2007 United Nations Declaration of the Rights of Indigenous Peoples by excluding the tribal leaders from the bilateral negotiations, and noted the ‘financial, material, cultural, intellectual, religious and spiritual losses’Namibian tribes had suffered under German colonial rule. The plaintiffs demanded that they be included in any final negotiations between the German and Namibian governments and, further, be awarded ‘damages’ and ‘punitive damages’ by Germany ‘for its flagrant and outrageous violations of international law’. While the suit claimed that the tribes had suffered ‘incalculable damages’, one source initially placed the amount at $30bn.

The five-year journey of President Steinmeier’s appeal to the conscience of his nation, from an opposition seat in the Bundestag, to the Foreign Office, to the presidential palace and to the US District Court, should serve as a cautionary tale of the perils awaiting political leaders who seek to confront complex historical legacies involving slavery, colonialism or atrocities ranging from genocide, to war crimes, to crimes against humanity.

American politicians understand this all too well. In 1988, the US Congress formally apologised for the detention of 100,000 Japanese Americans during the Second World War, and allocated $20,000 per person as compensation, which led to the logical question: why had there been no apology or gesture for the millions who suffered under slavery for more than 200 years? President Bill Clinton was approached by a congressman to consider such an apology, but never responded. It was not until July 2008,
20 years after the Japanese-American compensation decision, that the House of Representatives finally brought the idea of a formal apology to a vote.

‘This Congress did the right thing in apologising for the imprisonment of Japanese-Americans during World War II,’ Congressman Steve Cohen, a democrat from Tennessee, said in presenting the resolution at the 110th US Congress. ‘So it is with great honour that I speak on this resolution and urge the members of this body to pass this historic resolution.’ Cohn asked his fellow congressmen to ‘recognise our errors’ in waiting more than a century-and-a-half to apologise for slavery, then urged them to ‘travel forth to create indeed a more perfect union’.

The resolution passed, but there was no mention of financial compensation to accompany the apology, perhaps for good reason. One calculation placed the total value of slave labour in America at $100tn, based on 222,505,049 hours of forced labour between 1619 and 1865. The amount included a six per cent interest rate.

The British apologised for colonial-era brutalities in Kenya, and willingly paid the price. ‘The British Government recognises that Kenyans were subject to torture and other forms of ill treatment at the hands of the colonial administration,’ the British foreign secretary admitted in a Steinmeierian moment of remorse in June 2013. ‘The British government sincerely regrets that these abuses took place, and that they marred Kenya’s progress towards independence.’ He said that the Kenyans who suffered abuse during the Mau Mau rebellion, more than 5,000 in all, would receive a ‘full and final settlement’ totaling £19.9m, the equivalent of $31.1m.

The touchstone experience, however, remains the German confrontation of the Holocaust. And here, President Steinmeier can learn some lessons from a distinguished predecessor, Richard von Weizsäcker. As a young lawyer, von Weizsäcker defended his father, a Nazi war criminal, at Nuremberg, and went on to serve as federal president in the 1980s. He combined clear-sighted legal expertise with an innate moral sense of a people’s obligations to their past. On the 40th anniversary of the end of the Second World War, von Weizsäcker addressed the German Bundestag as a lawyer-president.

‘There is no such thing as the guilt or innocence of an entire nation,’ he said. ‘Guilt is, like innocence, not collective, but personal.’ He observed that the majority of Germans are too young to bear any personal guilt for Nazi crimes, but he did speak of their collective responsibility to acknowledge their past. ‘The greater honesty we show in commemorating this day, the freer we are to face the consequences with due responsibility,’ he said. He spoke of the suffering of the 6 million Jewish victims of the Holocaust, of subsequent German guilt and denial. ‘It is not a case of coming to terms with the past. That is not possible,’ he continued. ‘It cannot be subsequently modified or made undone. However, anyone who closes his eyes to the past is blind to the present. Whoever refuses to remember the inhumanity is prone to new risks of infection.’ The moral authority of von Weizsäcker’s words has been reinforced with more than $60bn in compensation payments to survivors and their families. 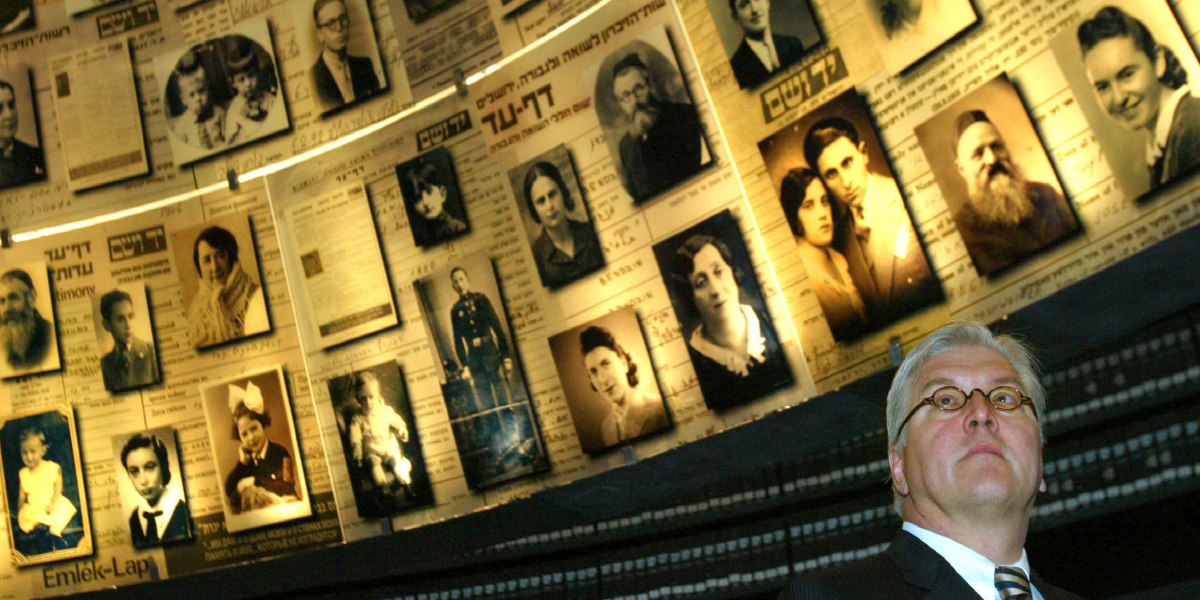 The March 2017 hearing for the Class Action Complaint against Defendant Federal Republic of Germany in the US District Court in New York was attended by around 15 tribal representatives, coming from Namibia, Canada and the US Midwest. Some wore colonial-era garb. There were no German representatives in attendance. This initial pretrial conference was brief. The plaintiffs presented their demands: their inclusion in deliberations between the German and Namibian governments, and a guarantee of financial compensation. The outcome was uncertain. A US Supreme Court decision in 2013, in the case Kiobel v Royal Dutch Petroleum Co, restricted the use of the Alien Tort Statute to cases affecting US interests, but the class action complaint specifically includes ‘tens of thousands’ of Herero and Nama peoples ‘in Botswana, South Africa, the United States and many other countries around the globe’. The hearing lasted less than 15 minutes, but the result was significant. The judge scheduled a second hearing for Friday 21 July.

The lawsuit could be precedent-setting not just for German relations with Namibia, but also with other former colonial holdings, including Tanzania, where atrocities were committed on an even greater scale, along with Burundi, Cameroon, New Guinea, Rwanda and Togo. And that is just for Germany. The proceedings will certainly be watched from Berlin, but will also resonate around the world.

Timothy Rybackis Executive Director of the Institute for Historical Justice and Reconciliation in The Hague, and can be contacted at ryback@ihjr.org