Saudi Arabia and Israel quietly prepare ‘deal of the century’

Global Insight investigates a major yet secretive new alliance between Saudi Arabia and Israel intended to bring peace to a tumultuous region and make Saudi Arabia the uncontested leader of the Middle East.

As countries in the Middle East move to re-position themselves to face new perceived threats, a major new alliance, and one previously considered implausible, appears to be emerging. The conservative Kingdom of Saudi Arabia is signalling it can strike an unprecedented peace deal with Israel, a country that is still known in some Saudi books as the ‘Zionist Enemy’.

The region is abuzz with slogans for the new deal but nothing captures what’s going on as well as ‘the deal of the century’, a phrase coined by Egyptian General-turned-President Abdel Fatah al-Sisi and extensively adopted by Arab media. The idea is that all Arab nations will finally become allies with Israel, bringing peace to the previously tumultuous region.

At the heart of the new deal is Saudi Arabia, now having surpassed Egypt as the Arab countries’ uncontested leader, backed with soft-power and vast, oil-generated coffers.

Recently, Saudi Arabia has made the shift to limit the threats it faces to no more than two enemies: Iran and Sunni Islamist political opposition. These happen to be seen as the two threats facing Israel as well. This has brought both countries to an unlikely alliance. In the words of an influential member of the Al Saud ruling family, Prince Alwaleed bin Talal, ‘For the first time, Saudi Arabian interests and Israel are almost parallel… It’s incredible.’

Iran and Saudi Arabia are already engaged in a cold war across the Middle East. Israel is rattled at the prospect of a nuclear Iran. Saudi Arabia sees combating organised Islamist opposition as a priority, especially after their Arab Spring successes. Israel shares the same concerns as the country fears a repeat of the Arab Spring could lead to Islamist governments taking over from current unpopular regimes and later gaining control of vast military resources.

This is well-timed for Washington, too. President Trump says he, more than any of his predecessors, can bring the two countries closer. Trump appointed his confidante, son-in-law and top advisor, Jared Kushner, to the role of Middle East peace broker. Kushner’s developed a solid relationship with Saudi Arabia’s strongman, Crown Prince Mohammed bin Salman, but not with the Palestinians. It looks most likely that he will be successful in bringing the Israelis closer to the Saudis, not to the Palestinians.

In June, the White House made a point of publicly celebrating the fact that Air Force One flew directly from Riyadh to Israel when Trump made his first foreign visit since he assumed office in January.

Warming relations with Israel have also been a recognised approach for Arab regimes whenever they face internal challenges, with a view to drumming up American and Western support against local opposition by appearing ‘moderate’, ‘open’ and ‘tolerant’ – three words now highly valued by Arab regimes facing survival issues.

Qatar opened partial contact with Israel in 1996 after the former Emir Hamad bin Khalifa Al Thani deposed his father by way of showing further openness to the West. The Emir also allowed Israeli officials on Al Jazeera, a first for any Arab media outlet.

Most recently, President Abdel Fatah al-Sisi of Egypt, working hard to consolidate his rule after coming to office in a bloody coup in 2013, urged other Arab nations to make a pan-Arab peace deal with Israel. He told the Israelis he can bring about ‘the deal of the century’. Israel has been a major supporter of the Sisi government.

To make the setting for Saudi-Israel contact even more timely, Riyadh’s closest ally in the Gulf countries, the United Arab Emirates, accepted the first ‘unconventional’ Israeli diplomatic mission. It’s widely believed that the mission, which works on international renewable energy, long with the UAE embassy in Washington, is being used as a conduit for Saudi-Israeli contacts.

There have also been several meetings between Israelis and Saudis. The Saudis have generally sought to ‘test the water’ and gauge Saudi public reaction to the moves. News of the meetings was leaked to the media.

In 2015, both countries acknowledged that they had been holding secret meetings to discuss Iranian ambitions in the region, though they conceded there remained differences over Israel’s treatment of the Palestinians.

Later in 2016, a former Saudi General, Anwar Eshki, leading a team of businessmen and academics, held unprecedented talks with Israeli members of the Knesset. Eshki has since appeared on television speaking in favour of a deal with Israel.

The biggest game changer may be the almost certain ascent of the 31-year old Crown Prince Mohammed bin Salman to the Saudi throne. MbS, as he is often referred to now, is close to Jared Kushner. He is also keen to make a foreign policy mark to eclipse local and international doubts about his youth, governing ability and statesmanship, particularly given his role in the catastrophic developments in Yemen, which attracted widespread international criticism.

Mohammed bin Salman is surrounded by advisors known for sympathetic positions towards Israel and hostility to Islamist groups such as Hamas. One of them is Abdul Rahman al-Rashed, an influential journalist-turned-political-advisor, whose anti-Hamas rhetoric has normalised criticism of the Palestinian group in Saudi media. Al-Rashed has lobbied to label Hamas as a terrorist organisation, a position adopted by Israel for many years.

Despite the clear cosying up, the Saudis still say the Israelis will have to offer the Palestinians a deal, or a variation of that; something the Saudis can build upon. The starting position should be Israeli acceptance of the Arab Peace Initiative, promoted by the late King Abdullah of Saudi Arabia in 2002. The plan calls for the establishment of a Palestinian state on the borders of 1967. 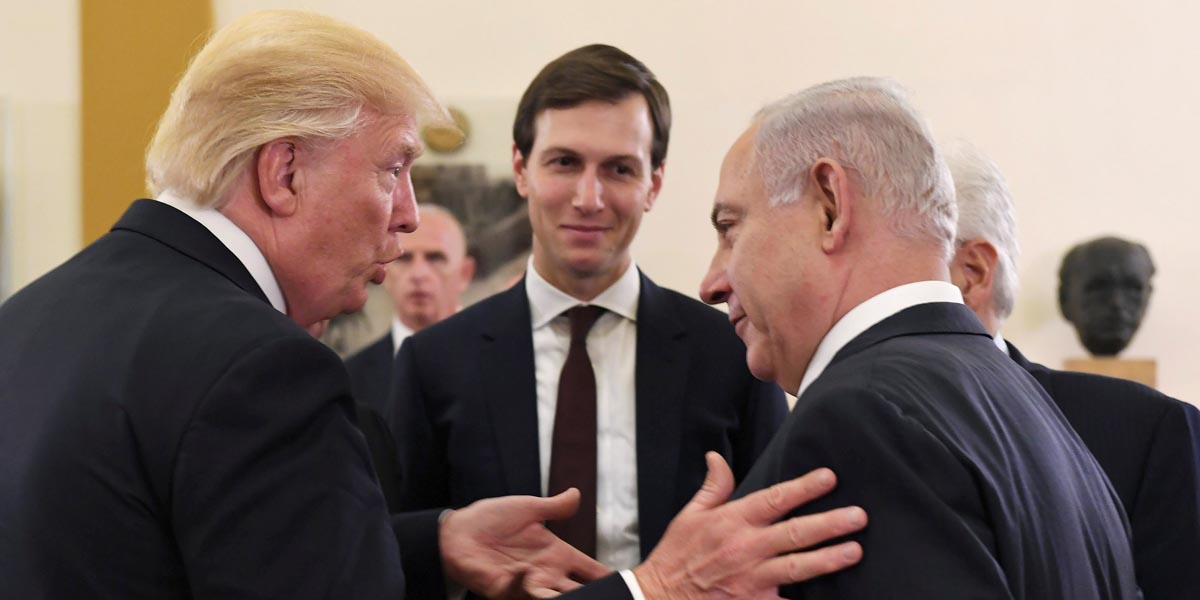 ‘Saudi Arabia’s and Israel’s shared antipathy for Iran is the principal factor drawing them together. However, for the foreseeable future, this relationship will remain in the shadows, both because of the nature of the cooperation and because formal Saudi diplomatic recognition of Israel depends upon an Israeli-Palestinian peace agreement, which does not seem forthcoming,’ says Perry Cammack, a fellow with the Carnegie Endowment for International Peace.

To grease the wheels of the deal, the Saudis tout economic opportunities with the wealthy, oil-rich countries of the Gulf. Perks will include direct telecommunication, Israeli airlines flying over the airspace of Gulf States and no trade restrictions with Israeli companies. Israeli officials themselves estimate immediate benefits upwards of $45bn. Reportedly, the two countries have already been negotiating undisclosed trade deals.

‘I see this as mutual manipulation for different ends with a shared view of Iran. Israel can brag about its access to Arab leaders, including the UAE, and Israeli visits to Gulf conferences, and the Saudis build their reputation with Congress as being friendly with Israel,’ says Charles Smith, Professor Emeritus of Middle Eastern History at the University of Arizona. ‘But, the Palestinian issue cannot be discarded as Bibi [Netanyahu] hopes.’

Indeed, Riyadh has so far shied away from a clear public position. Undemocratic and gripped by self-promoted notions that their own Arab public is not sufficiently informed or educated to make a decision on relations with Israel, Saudi Arabia – like many other Arab regimes – prefers contact with Israel, technically still an occupier of Arab land, away from the public gaze. Direct Saudi-Israel contacts have almost all been ‘covert’ or ‘unofficial’, with a few leaks.

On 6 September, Simon Aran, Israeli Diplomatic Correspondent for the Israel Broadcasting Authority (KNN) tweeted that ‘a top official from the Gulf’ was secretly visiting Israel and that Netanyahu’s office and the Israeli Foreign Ministry refused to comment on the news. But, sensing the opportunity and the timing, several Israeli officials have urged the Saudis to press ahead with a ‘public’ agreement and contacts independent of the Palestinian issue.

After describing shared interest in countering rival Iran and political Islamists, Israel’s Intelligence and Transportation Minister Yisrael Katz said he wanted similar treatment of the Israelis to that extended to President Trump. ‘I call upon Salman, the King of Saudi Arabia, to invite the prime minister of Israel, Netanyahu, to visit Saudi Arabia,’ Katz said in June at the annual Herzliya Conference, a venue for new Israeli national strategy initiatives. ‘We saw what a wonderful host you can be... when President Trump was there. You can also send your heir, the new one, Prince Mohammed bin Salman. He’s a dynamic person. He is an initiator. And he wants to break through.’

When that happens, the public in Arab countries will have seen the ‘deal of the century’.

Emad Mekay is the IBA’s Middle East Correspondent. He can be contacted at emekay@stanford.edu