As the date currently set for the UK’s exit from the European Union approaches, the prospect of a no deal Brexit at the end of March has become increasingly real. On 15 January, MPs emphatically voted down the withdrawal deal put forward by Prime Minister Theresa May, by an historic majority: 432 – 202. They’re due to vote on the government’s Plan B option on 29 January, with key sectors of the economy keen for certainty that is currently distinctly lacking.

Despite months of discussions with the UK banking watchdog – the Prudential Regulation Authority (PRA) – and the European Central Bank (ECB), many banks are still in the dark about how their operations will be affected come Brexit Day.

‘Even in a negotiated deal scenario, the legal impact of Brexit on the financial sector is significant,’ says Giuseppe Schiavello, founder of Schiavello & Co Studio Legale and Co-Chair of the IBA’s Banking Law Committee. ‘The draft withdrawal agreement approved by the EU is still silent about financial services, and three mere declarations of principle are contained in the ‘Outline of the political declaration setting out the framework for the future relationship between the European Union and the United Kingdom of Great Britain and Northern Ireland, as agreed at negotiators' level on 14 November 2018’. 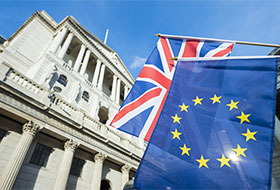 Florian Drinhausen, General Counsel at Deutsche Bank, says the sector is crying out for clarity. ‘The key thing we need is a clear framework of what is legally permitted to do after Brexit,’ he says. ‘What’s not clear is the transition period, what mutual recognition we’ll have and when we will have a final regime in place that’s new. That affects almost every aspect of our business.’

Drinhausen says the question of whether pre-Brexit deals will remain intact after the UK leaves the EU has not been adequately addressed: ‘Our financing transactions for example – will they be grandfathered and can we continue to service them? That’s a debate we need to have and we are having at the moment and we’re not alone – the entire financial industry is looking at this. The easiest way would be if people could agree that we simple grandfather this, but that’s clearly a political decision, and that’s a decision that we as a bank, as large as we may be, have little influence over.’

However, as the deadline for leaving the EU fast approaches, some say grandfathering seems an increasingly unrealistic option. ‘There is a significant risk that existing contracts may turn invalid if the services to be performed would no longer be permitted to the originally passported counterparty following Brexit,’ says Schiavello. He says the potential effects could be disruptive for many banks, particularly ‘if no transition period is envisaged.’

Jonathan Herbst is Global Head of Financial Services Regulation at Norton Rose Fulbright and the former head of European Law at the UK Financial Services Authority (FSA). He agrees that grandfathering is off the table now as far as banks are concerned. ‘It’s very unlikely,’ says Herbst. ‘[The EU] view is that unless it’s significant to their interests – and that’s all their interested in – there will be no movement.’

Some light has been shed elsewhere in the sector though. UK-based clearing houses breathed a huge sigh of relief in November 2018 when the European Securities and Marketing Association said it would make an exception and recognise them for a temporary period from 30 March – the day after the UK leaves the EU. This will ensure firms in the European Economic Area retain access to clearing and settlement services even in the event of a no-deal scenario.

Even without the assurances of grandfathering, Herbst says banks have been quietly preparing for potential cliff-edge risks for some time. ‘The reality is that the UK banks and indeed the European branches here have had to work on the assumption of a no-deal for a long time,’ he says. ‘They’ve been forced to do that by the PRA and the ECB. So, theoretically it shouldn’t make a real difference because they’ve been putting their plans in place and they’ve been working on that assumption anyway.’

Many banks have already made contingency plans. Some, like Barclays and Bank of America Merrill Lynch, have relocated their European hubs to Dublin to ensure they can continue to service clients in the EU. Drinhausen says a ‘small number’ of staff have been earmarked to move from Deutsche Bank’s London office to its headquarters in Frankfurt.

Peter Snowdon, a specialist in financial services regulatory law at Norton Rose Fulbright, says Brexit may be a wake-up call to some banks currently operating across Europe. ‘It turns out that quite a lot of banks who’ve now mapped their activities have found out that they’ve been doing things in Europe that strictly speaking they haven’t had permission to do,’ says Snowdon. ‘Nobody has really thought about that in terms of cross-border activity, as up until now it hasn’t really mattered, but of course in the Brexit world suddenly the barriers go up.’

Assuming Brexit isn’t delayed, Snowdon says any banks that find themselves in this scenario will need to work quickly to remedy the situation before 29 March. ‘What banks need to be doing if they’re in that position is they need to start thinking about whether they’re going to put in a formal application before Brexit Day, or whether they’re going to notify that they will put in an application on Brexit Day,’ he says. ‘If you don’t go through the notification process or the application process suddenly you could find your business undermined.’