When a Saudi woman was arrested in July 2017 for wearing a miniskirt in an online video, there was hardly a Western outlet that didn’t cover the story.

But when in September 2017 two prominent female academics, who choose the traditional garb, were arrested for calling for real political and business reform, Western media interest was absent even though their fate is still unknown.

Many Muslim women have been aware for some time that the Western media, particularly in the US, tends to present them as being in need of sexual freedom or, on other occasions, oppressed and submissive or, worse, associated with terrorism. Now, academic studies are providing Muslim women with data in their struggle for an accurate Western media representation.

After using a systematic computer generated comparison of both the quantity and quality of more than 4,500 articles that appeared over 35 years in The New York Times and The Washington Post, Rochelle Terman, a researcher at Stanford University, found that Muslim women are more likely to appear in US media coverage ‘almost exclusively’ if they live in societies with poor records of women’s rights.

‘Of course, Muslim women have been sharing this insight for years - ie, that Western media portrayed them as passive victims et cetera,’ Terman tells Global Insight. ‘There was nothing I “discovered” that hadn't already been known in some way. My contribution was merely to approach the issue in a quantitative way. ‘

‘‘We ought to be careful with generalizations, and with attaching issues of sexism and abuse as prevalent traits of an entire religious group

Federica D’Alessandra is a fellow at the Harvard Kennedy School's Carr Center and Vice-Chair of the IBA’s Human Rights Law Committee. She says that the media tend to not only generalise when it comes to women but also tend to ignore key factors affecting the rights issue in Muslim countries.

‘Many of the abuses and deprivations that can be identified in the countries in question are, I believe, the result of political outcomes, not religious precepts,’ she says. ‘The proof of this is the diversity of policies that regulate women’s rights in Muslim countries. If religion was the source of these laws, wouldn’t all Muslim countries have the same rules regulating certain type of conduct? But they don’t, and I believe western media can and should do better in highlighting this diversity. We ought to be careful with generalisations, and with attaching issues of sexism and abuse as prevalent traits of an entire religious group.’

Terman used a tool called structural topic modelling, a machine learning technique that enables a methodical comparison of both the volume and the substance for news coverage – helpful when analysing over 4,500 articles.

The study found that portrayals of Muslim women in the US media propagated a perception that Muslims in general are distinctly sexist. ‘US news coverage of women abroad is driven by confirmation bias. Journalists are more likely to report on women living in Muslim and Middle Eastern countries if their rights are violated, but report on women in other societies when their rights are respected,’ Terman says. ‘Stories about Muslim women emphasise the theme of women’s rights violations and gender inequality, even for countries with relatively good records of women’s rights.’

In other words, countries like Iran and Saudi Arabia, with repressive regimes, are featured in greater numbers, while those nations with relatively good records – such as Malaysia and Tunisia – are covered less often, the study says. Reporting about women in the Middle East devotes 73 per cent more coverage to issues like women’s rights and gender equality, compared to women in the West, and more than four times the attention to religion. 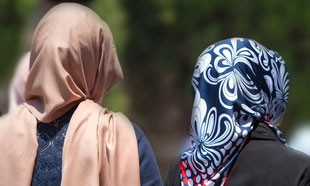 Reporting often makes little or no distinction between Muslim women living in the West or in Middle Eastern countries leading to the perception of submissive or discriminated against women in Islam in general.

‘If the majority of news portrayals of Muslim women are about women in Taliban-era Afghanistan (or other societies with poor respect of women’s rights), a reader might build the association of Muslim women with a lack of rights regardless of the topic,’ the research says.

Laurens de Rooij, a postdoctoral fellow with the Department of Religious Studies at the University of Cape Town, says his work shows similar results in media in the UK when it comes to Muslim women. ‘There is a similar trend to be seen in the UK,‘ he tells Global Insight. ‘The reason human rights respect doesn’t appear in the news is not the result of news values, but because that would suggest those countries, people, regions are like the US, UK or in the process of becoming like the US and the UK and that is something that cannot be supported.’

Some scholars warn disparaging portrayals go beyond being a matter of nuisance or frustration for Muslim women. The level of stereotyping tends to shape public perceptions and can be used to justify Western policies.

Alain Gabon, Associate Professor of French Studies at Virginia Wesleyan University, is also working on Muslims and Islam in the West. He observes that Muslim women at conferences devoted to the issue have increasingly expressed frustration at having to constantly watch their behaviour to avoid stereotypes created by the media. ‘They've grown exhausted of trying not to send the wrong message’, he says.

Terman, de Rooij, Gabon and other scholars of Islam and the Muslim nations are voicing concern over inaccuracies in representations of Islamic culture point to rampant Orientalism, a form of representation of others in a minimalist or negative light to justify aggressive polices to help civilise ‘barbaric or degenerate cultures’, as one of the main culprits.

Louise Cainkar is a Professor at Marquette University and board member of the Association of Middle East Women’s Studies. ‘The way Muslim women are covered in the US media has been talked about and written about by Muslim women and by scholars for at least 40 years,’ she says. ‘Yes, Muslim women have been widely aware of it and complained - if that is the word - about it for at least as long. But how loud must their voices be in order to be heard? That is the real question. Why is a scholar's quantitative analysis needed for such claims to be credible?’

D’Alessandra acknowledges the issue but says the new data is, of itself, a step towards a more accurate portrayal in the media. ‘The role of the media is not the one factor that single-handedly led to the increase of hate crimes or prejudice against Muslims. And neither do I believe that western media have intentionally and in bad faith promoted certain narratives. But narratives are important in shaping what societies are prepared to accept and tolerate, and ultimately narratives are strongly influenced by the media,’ she says. ‘I am happy that we finally have hard data to help us think through the way Muslims and Muslim societies have been portrayed in Western media, and I hope that this will lead to different approaches in the future.’