George Bizos, famously known as Nelson Mandela’s lifelong friend and lawyer, has died in Johannesburg aged 92. He was a junior advocate on the illustrious team of lawyers that defended Mandela in the Rivonia trial that saw him sentenced to life in prison.

During Mandela’s incarceration in the prison on Robben Island, off Cape Town in the Atlantic Ocean, he looked after Mandela’s personal affairs, his then wife, Winnie Mandela (who has also died) and his two daughters.

Bizos is known among other things, for taking on a great many cases around the country of the poor, as well as having taken on many of the toughest political trials apartheid South Africa provided. 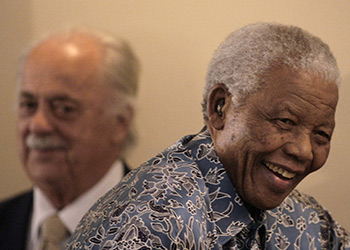 Less well known is his vegetable garden at his house in Johannesburg which he tended to lovingly every morning and from which he provided fresh vegetables to his clients while they were in detention. One of these was Popo Molefe who was a defendant in the Delmas Treason trial. He told a local television station that the defendants looked forward to the vegetables while they were held in Modder Bee prison, awaiting trial.

This aspect of his life was known to most lawyers he encountered, including Sir Sydney Kentridge who appeared in several cases as the senior advocate when Bizos was the junior. Kentridge recalls how, when he was invited to Sunday lunch, Bizos would prepare roast lamb on a spit – apparently delicious - from early in the morning.


In my experience, he never made snap decisions. He weighed everything up


Speaking from London, Kentridge says that what he admired about Bizos was that he ‘was thoughtful and wise’. What he had, says Kentridge, did not require a great legal knowledge, although he had that as well. His role at the inquest into the death at the hands of police while in their custody of political activist Steve Biko showed both ‘judgement and wisdom’.

This, says Kentridge, manifested when giving clients advice on when and whether to litigate. Although a case of a client may have been good, it may not always have been useful for the long-term benefit of the client to litigate. ‘The point is that it is not just a matter of law – but of wisdom,’ says Kentridge, adding that Bizos was a very good judge of people, but was not ‘judgmental’.

Kentridge’s wife, Felicity, also a lawyer, had set up the Legal Resources Centre – a public interest law firm – along with Arthur Chaskalson who was South Africa’s first chief justice at the inception of the Constitutional Court. Bizos had joined the firm and continued to work there until he was literally unable to go into the office every day. ‘In my experience, he never made snap decisions. He weighed everything up.’

Kentridge says Mandela had the greatest faith and confidence in Bizos. This became apparent when the South African Government began talks with Mandela while he was in Pollsmoor Prison in Cape Town. Bizos was his emissary to the African National Congress (ANC), in exile in Lusaka, keeping them fully apprised of the talks. This close relationship continued throughout Mandela’s life.

Kentridge said that if one asked him for advice, it would be given with much thought and wisdom. That observation resonated in an incident described by Justice Richard Goldstone, speaking from Johannesburg. He had been asked in 1987 to inspect detainees being held mainly for political reasons during the State of Emergency which lasted for many years of the 1980s. The detention of these activists was accompanied by frequent accusations of torture and manhandling by police.

‘This gave me a huge dilemma,’ Goldstone said. ‘I did not want to be involved with the detention without trial of the detainees.’ He answered the request by saying he needed 24 hours to think about this, during which time he met Bizos for lunch. He put his dilemma to Bizos who agreed it was indeed a problem. Detainees however needed to be visited. Bizos’s advice to Goldstone was to go and visit a detainee and ask what they wanted.

Goldstone went to the notorious police station, then called John Vorster Square, and was allowed to interview Zwelakhe Sisulu, son of Mandela’s fellow Treason trialist, Walter Sisulu. He put his dilemma to Sisulu, asking for his advice. Sisulu couldn’t give any, but said he was simply extremely pleased to see Goldstone. In the end Goldstone undertook around 3000 detainee visits. ‘Without George’s advice I might not have done it,’ Goldstone says.

Bizos was not universally loved. Aside from the judges he irritated and the prosecutors who feared him, his decisions did not always please his colleagues or those involved in the politics of the day. One unpopular move was his defence of the late Morgan Tsvangirai who had been charged with planning a coup d’etat. Bizos travelled to Zimbabwe in 2004 to defend the opposition leader. This evidently displeased then South African President Thabo Mbeki and Zimbabwean Prime Minister Robert Mugabe. South Africa supported Mugabe despite considerable evidence that the regime had become brutal and violent in its suppression of opposition.

Born in Greece and during the Nazi occupation of the country, at 13 years old, George Bizos and his father took a small boat and seven New Zealand soldiers out to sea to help them escape the Nazis. They very soon got into difficulties and had to be rescued by a British ship which took them to Egypt from where they were sent as refugees to South Africa.

Bizos was never at ease with himself as an immigrant more privileged than Black South Africans. He abhorred apartheid and its injustices (in fact all injustices) and, having studied law at the University of the Witwatersrand, set about helping those who needed it in court rooms. This took him around the country appearing at seemingly small trials in small towns to help various people, often activists, who needed it.

He married the love of his life, Arethe, who died in 2017, and he leaves their three sons. 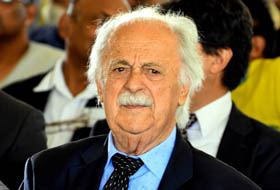 In 2004, the IBA decided to give its annual Rule of Law Award to George Bizos. We didn’t know this would lead us on a journey that would attract media headlines, captivate our members and delegates throughout the week of the Annual Conference in Auckland. Years later, when George was to write his autobiography, it would form the final climax of that long and remarkable book.

George’s life and achievements were already much celebrated. Both for his long and vital role in the struggle against apartheid alongside his close friend Nelson Mandela, and for his tireless role in later life at South Africa’s Legal Resources Centre, helping to bring access to justice to a much wider community of citizens. But, there had been earlier adventures in his life, barely known, which were to take centre stage the week we gave the Award.

A few weeks before our planned ceremony in Auckland, I spoke to George by telephone, and by chance asked if he had ever been to New Zealand before. ‘Never’, he said, ‘although it has always been a dream of mine to go there.’ He then recounted the extraordinary story of how, during the Second World War, as the Nazi armies swept south through his home country of Greece, causing the Allied troops to scatter into the mountains in small groups, his father Antonios had become aware of one such group near their village, and had decided to help them with supplies, and if possible, escape.

Risking his life to do this, and despite speaking no English, contact was made and trust established with the soldiers, partly due to Antonios’s idea of taking his 13 year-old son George with him to show there was no danger. The soldiers were seven young New Zealanders, and further contacts over the days ahead led to a plan to find an old boat on the nearby already guarded coast, and sail away to Crete. So, at dusk one evening in late May 1941, the whole party set out into this extreme peril, with no detail of the story being more remarkable than that young George boarded the boat too.

Their good fortune in getting safely out to sea was short-lived: they were soon enveloped in a heavy storm, which destroyed the sail and left them with only oars to navigate the churning water. This could so easily have been the end of the story, but on the third evening, they were spotted by a British Royal Navy warship, which picked them up, and later deposited them in Alexandria. There they parted forever from the New Zealanders and were moved as refugees to South Africa.

It was not hard to understand, after hearing of such a defining childhood experience, how George would go on to devote so much of his life to helping the disadvantaged. He regretted that he had never known what became of the soldiers, and from that came a plan that we would try to seek them out, by telling the story to the media in New Zealand. The only name he could remember, he said, was that the leader of the group was called Lewis.

The day George landed in Auckland, his boyhood story was on the front page of the New Zealand Herald. Reading the paper at her home that morning, Bronwyn Lewis recognised immediately the details her father John had recounted to her often, and got in touch, leading to a very emotional meeting later that day between George, Bronwyn, John’s widow Freena and his granddaughter Michaela, which made more headlines the next day. It was particularly amazing to the Lewis family, of course, that the small Greek boy they had heard about so often had grown up to be the great fighter for justice and the cause of Nelson Mandela.

What’s more, Bronwyn had brought with her an old family album of cuttings and photographs which provided names and images for the other soldiers, leading to a whole week of discoveries, reminiscences and tearful gatherings for George and more families, shared across the country through the media.

The story has continued even this summer, sixteen years later – David Martin, the son of soldier Peter Martin, wrote to me with further details he had found in his late father’s papers, and I was able to connect him to share them with George, through his son Damon, in his last weeks. Damon has also written to say how appreciative George was of the honour the IBA gave him. It’s another reminder of the essential role the Association plays in giving recognition to those who champion the Rule of Law, something George acknowledged in his award acceptance speech.

‘I believe it is the duty of every one of us, as individuals,’ he said, ‘and particularly the International Bar Association and its constituent Bars, to lend moral and material support to our colleagues who are engaged in the establishment of democracy, the Rule of Law and the human rights contract in their countries. Even established democracies, when under actual or supposed danger, find it convenient to abrogate the laws of humanity, forgetting that they too may one day be in distress and that the laws may not be there to protect them.’