The decision by a South Korean court to declare Hanjin Shipping bankrupt suggests the country’s government should no longer support struggling companies with public money. But Korea’s export industry accounts for more than half the country’s $1.4tn economy, so policy is unlikely to deviate.

Henry M Paulson Jr was adamant that the history books would not refer to him as ‘Mr Bailout’. On a conference call a few days before the collapse of Lehman Brothers in September 2008, the former United States Treasury Secretary explained to then Federal Reserve (Fed) Chairman Ben Bernanke, among others, why he would not use public money to rescue Lehman Brothers.

Scholars are still struggling to understand why the Fed was able and willing to use public funds to rescue Bear Stearns and American International Group earlier in 2008, but not save Lehman. The Fed’s former Vice-Chairman, Alan S Blinder, has been quoted as saying: ‘The inconsistency was the biggest problem.’

The South Korean government has been facing similar issues since it permitted Hanjin Shipping – Korea’s largest and the world’s seventh-largest shipper – to file for court receivership and protection in late 2016 after failing to get any more money from its creditors.

The Seoul Central District Court subsequently declared the company bankrupt in February 2017. The scenario surprised many as, for years, the government in Seoul had injected billions of dollars of cheap state loans into the sector, to keep lossmaking Korean shipping companies and shipbuilders afloat, with little progress to show for it.

Since the global financial crisis of 2008, dwindling trade has led to crippling excess capacity in the global shipping industry as supply has outstripped demand. With Korean industries such as chemicals, construction and steel in a similar predicament, the hope in South Korea is that the government’s decision to leave the fate of Hanjin to market forces indicates how it will approach future restructuring of Korea Inc.

Container shipping moves the vast majority of the world’s manufactured goods. While Hanjin only represented roughly three per cent of this market, the company, together with domestic rival Hyundai Merchant Marine (HMM), handled the bulk of South Korea’s exports, which account for more than half of the country’s $1.4tn economy.

Korean exports have been falling year-on-year for the past 15 months, in part due to the slowing economy in China, which is Korea’s largest trading partner. Governments will often protect struggling flag carriers given how vital they are to the national interest, but, in the context of a difficult economic climate, the South Korean government felt that letting a major company fail could be justified. The fact that it was Hanjin and not HMM was, however, harder to explain.

HMM, South Korea’s second-largest shipping line, which controls a 2.2 per cent share of global container capacity, was in no better shape than Hanjin at the start of 2016. With revenue falling 25 per cent from a year earlier to $2.5bn, HMM posted a $556m operating loss in the first nine months of 2016 and, unlike Hanjin, it failed to get accepted into the world’s newest vessel-sharing arrangement: THE Alliance.

While HMM continues to trade at a loss today, last year it worked quickly with main creditor Korea Development Bank (KDB) to ward off bankruptcy by undergoing a voluntary debt restructuring that saw it reduce costs by more than 30 per cent. By August 2016, HMM creditors had swapped their debt for half of the company’s equity.

Elinor Dautlich, a partner at Holman Fenwick Willan and Co-Chair of the IBA Maritime and Transport Law Committee, says one of the reasons HMM survived was that it acted before Hanjin in agreeing a restructuring deal with its creditors and other interested parties. ‘HMM was quicker to present restructuring plans to interested parties and get a deal agreed, particularly in terms of renegotiating charter rates with third-party vessel owners. By the time Hanjin was also looking to agree a restructuring plan, owners were apparently more reluctant to renegotiate charters at rates that were less favourable to them.’

The collapse of Hanjin also directly benefitted HMM, which acquired its rival’s interest in container terminals in Tokyo and Kaohsiung, Taiwan, as well as terminals in Long Beach, California and Algeciras, Spain.

But Dautlich says it was Hanjin’s failure to act sooner, rather than its eventual bankruptcy, that helped HMM continue to trade. ‘The opportunities left by Hanjin will not be enough for HMM in the current marketplace. This is why the company is pursuing other opportunities, such as entering into a new strategic alliance with 2M (Maersk and MSC).’

Both Kwon-Hoe Kim, a partner at Yoon & Yang in Seoul and Website Officer for the IBA Asia Pacific Regional Forum, and fellow partner, bankruptcy specialist Sang-Goo Han, agree that the increase in HMM revenue caused by Hanjin’s bankruptcy will be limited. But they also believe the bankruptcy will not have a substantial effect on bringing down global overcapacity in the sector to a sustainable position. ‘This is partly due to Hanjin’s relatively small market share, as well as the fact that other companies have acquired its regular routes and foreign terminals,’ they say.

Hanjin’s debts were deemed unsustainable by most industry analysts, but there was an expectation that KDB would provide financial assistance if needed. However, circumstances did not work in Hanjin’s favour in terms of political support for state-funded bailouts and the temperament of market actors. In particular, Korean government policy last year was hugely influenced by the $1.3bn accounting scandal at KDB-funded Korean shipyard Daewoo Shipbuilding & Marine Engineering, which has led to greater scrutiny of KDB and its use of taxpayers’ money.

At the same time, as Dautlich notes, shippers are not huge employers, which gives them less political clout. Hanjin employed just 1,428 people, most of whom were from overseas. ‘When Hanjin needed support, the political will simply wasn’t there to step in and assist,’ she says.

The collapse of Hanjin was the largest bankruptcy to hit the shipping sector for 30 years. However, the global economic downturn has affected profits and led to overcapacity, lower freight rates and rising debt levels for a number of years. Even Danish company Maersk, the world’s largest shipper, recently revealed a $1.9bn net loss for 2016 – only its second annual loss since the Second World War.

Global spot rates did rise briefly in the immediate aftermath of Hanjin’s receivership, while a current lack of capacity on shipping routes between Europe and Asia has been attributed partly to the market adjusting to the company’s collapse. But there remains a serious overcapacity issue that Hanjin’s receivership will do little to solve. For this issue to be addressed, industry commentators say shipowners must be prepared to scrap underperforming ships, regardless of age. 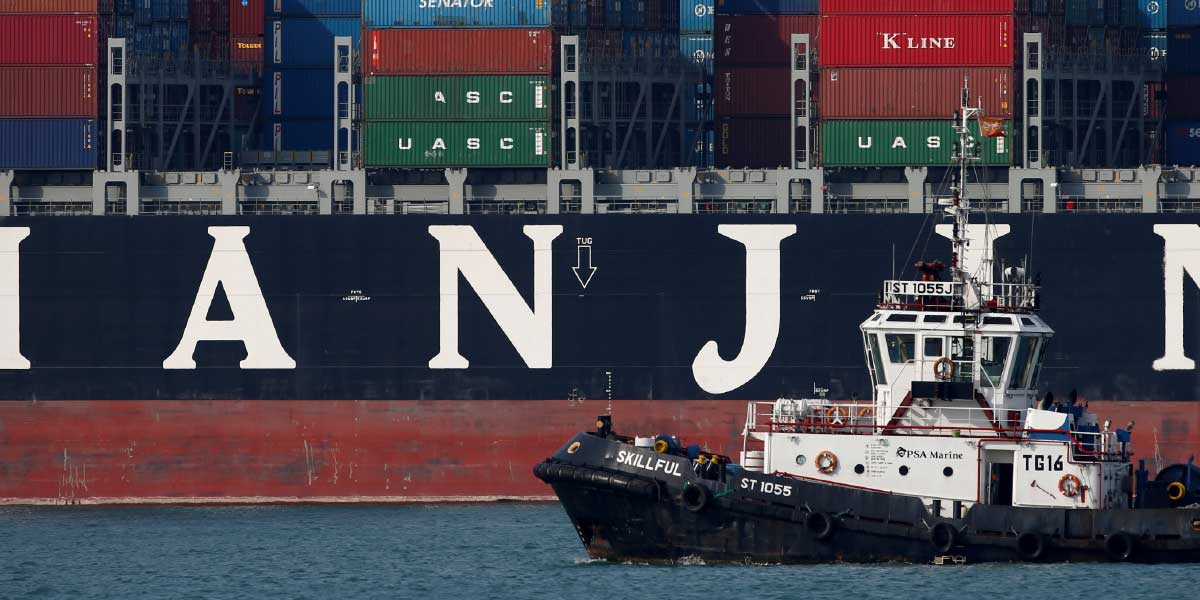 Finally, China’s ‘Belt and Road’ development initiative was described recently by the Chairman of Maersk China, Tim Smith, as ‘an exciting prospect for an industry needing stimulation’. It is hoped, for example, that investments in shipping ports – like the $10bn upgrade to the port of Malacca in Malaysia, and other planned investments in Russia and West Africa – may help increase international trade, which naturally benefits shipping.

Dautlich says China’s involvement in countries that have not previously traded heavily, such as Iran, may also boost trade under the Belt and Road strategy. ‘Now that sanctions have been lifted (outside the US), there is an opportunity for global shipping hubs such as Hong Kong to benefit from increased trade with Iran. Increased production of steel and cement in China as a result of infrastructure projects under Belt and Road could be very beneficial to the dry bulk shipping lines transporting raw materials to China’s ports,’ she adds.

Like the US government’s handling of Lehman before it, the South Korean government’s decision to let Hanjin fail has been criticised for being inconsistent with previous policy. But its willingness to let a major company disappear should not be misinterpreted as a change in policy.

Shippers and shipbuilders have been the engine of Korea’s export growth in recent decades, and this has not suddenly been forgotten by Seoul. The launch of a $9.84bn fund, for instance, will enable state lenders to withstand losses until the end of 2017, as they facilitate the long overdue restructuring of the industry. In the meantime, the government will closely monitor restructuring progress at the country’s shippers and shipbuilders.

Stephen Mulrenan is a freelance journalist based in Hong Kong. He can contacted at stephen@prospect-media.net