According to the 2017 report, Global Estimates of Modern Slavery: Forced Labour and Forced Marriage, 40.3 million people were estimated to be victims of modern slavery in 2016. Modern slavery is not defined in law and it is used as an umbrella term to refer to ‘situations of exploitation that a person cannot refuse or leave because of threats, violence, coercion, deception, and/or abuse of power’.

The IBA is launching a multifaceted initiative against forced labour, human trafficking and child labour. Given the prevalence of forced labour in global supply chains, there has been a growing trend to introduce soft law standards and obligations on corporate entities. These regulations represent an important step towards a more effective legislative framework against modern slavery, however they also pose several challenges in their implementation. The IBA, through the establishment of a working group of experts, will look at these drawbacks and, in particular, at policy coherence, public-private interaction and non-punishment principle.

Unveil the true price of your shopping basket. Your choice can make a difference. 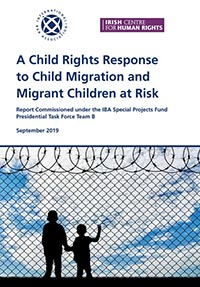 The rights of migrant children are under threat in all parts of the world. The international protection and universal recognition of the rights of the child are frequently overlooked and dismissed by states. Despite the risks faced and the vulnerability created by immigration laws, policies and practices, migrant children continue to be viewed primarily as migrants and often irregular migrants. September 2019. 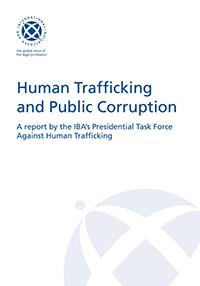 Experts agree that human trafficking could not exist without corruption. In 2016, the IBA’s Presidential Task Force Against Human Trafficking launched this extensive research project, in which they identified and analysed multiple corruption cases across the globe. If we are to combat human trafficking, we must eliminate the corruption that makes these abuses both possible and profitable.

Covid-19 has exacerbated the economic conditions in which modern slavery thrives. Global Insight reports on how work on solutions continues despite the global turmoil created by the pandemic.

According to the 2017 Global Estimates of Modern Slavery published by Alliance 8.7, 40.3 million people were estimated to be victim of modern slavery in 2016. The rise of Modern Slavery is one of the most shameful issues of our life and times. As the UN Special Rapporteur on contemporary forms of slavery stated: “Covid-19 has exposed pre-existing systemic gaps in social protection and justice systems, including with regard to identification and prosecution of contemporary forms of slavery, despite commitments made by States to meet target 8.7 of the Sustainable Development Goals”. Modern Slavery is a threat to the rule of law in the world and a profound human tragedy, yet few jurisdictions have directly addressed it.

The impact of Covid-19 on modern slavery and child labour

How can lawyers make a difference?

In 2016, 40.3 million people were estimated to be victim of modern slavery. The Covid-19 pandemic and the resulting economic and labour market shock are having a huge impact on people’s lives and livelihoods and are increasing people’s vulnerability to exploitation. This webinar focused on the impact of Covid-19 on vulnerable people and will look at the role of the legal profession to address the heightened risks of modern slavery and child labour.