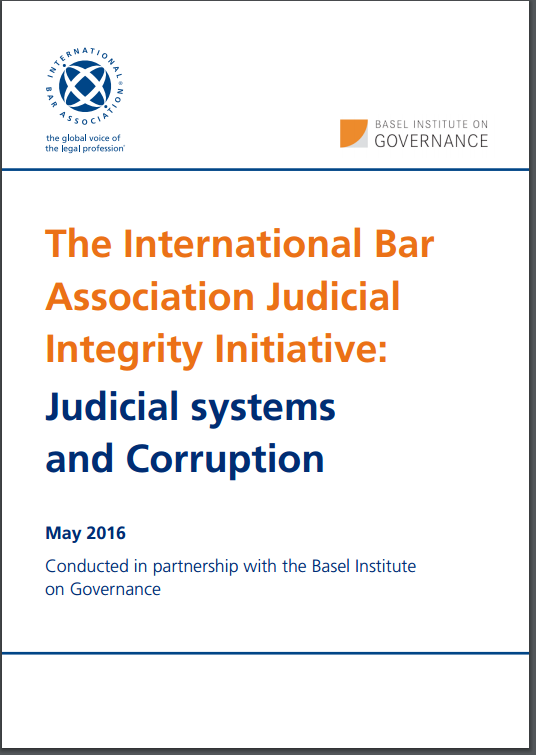 The IBA LPRU, in partnership with the Basel Institute on Governance, has published The International Bar Association Judicial Integrity Initiative: Judicial Systems and Corruption. The report has been created using the results of a global survey that involved 1,577 legal professionals from 120 countries, in country consultations and additional research.

The report identifies the patterns underlying corrupt behaviour in the judiciary, the types of corruption that affect judicial systems and the roles played by the various professionals operating within them. In particular, it focuses on concerns about bribery and also undue influence on judicial decisions, and the impact that these problems have on respect for the judiciary and for government as a whole.

The report has already received a lot of attention. IBA President, David W Rivkin, and the Chairman of the Basel Institute on Governance, Professor Mark Pieth, presented an analysis of the report on 15 June 2016 at the IBA/OECD Anti-Bribery Conference in Paris. Rivkin also discussed the report in his speech at the Vatican Conference on Human Trafficking and Corruption.

The Director of the IBA’s Legal Policy & Research Unit, Jane Ellis, provided an overview of the report at an event, Who Judges the Judges? Accountability for Judicial Corruption and Judicial Complicity, held at the United Nations in Geneva during the Human Rights Council session on 14 June 2016. Other panel members were: Monica Pinto, Special Rapporteur on the independence of judges and lawyers; Thulani Maseko, Lawyer, Swaziland (imprisoned by judges for speaking publicly about judicial misconduct); and Matt Pollard, Centre for the Independence of Judges and Lawyers, International Commission of Jurists. The IBA and the International Commission of Jurists (ICJ) jointly conducted the event, during which the ICJ launched its new Practitioners’ Guide No 13: Judicial Accountability.

The launch of this report completes the first phase of the IBA Judicial Integrity Initiative. The Initiative will now focus on practical actions that may have an impact in reducing judicial corruption where it occurs. These include compilations of best practices for prosecutors and for bar associations; a potential system to certify judicial systems as having procedures designed to prevent corruption; a model compact agreement that would contain an anti-corruption declaration signed in individual countries by the bar association, judges, lawyers, prosecutors and court personnel; a study of national laws regarding judicial corruption; and, consideration of asset recovery mechanisms.