The world must not turn a blind eye to genocidal intent

*Content warning: This article contains references to sexual violence and abuse that readers may find upsetting*

In this article, written exclusively for Global Insight, Ukraine’s Prosecutor General explains why what the world is witnessing in Ukraine should be treated as genocide.

For nine months, the world has witnessed the biggest military invasion of one UN Member State by another since the Second World War. Barbaric aggression by the Russian Federation against the territorial integrity, sovereignty and independence of Ukraine is taking place through ruthless attacks on cities, towns and villages full of civilians, in violation of the rules and principles of laws of war. It does not come as a surprise that the term ‘genocide’, together with ‘war crimes’ and a ‘crime of aggression’, is commonly and continually used in relation to the crimes committed in Ukraine by Russian armed forces and their proxies.

While the use of the term ‘genocide’ can be highly political and is often invoked in situations of mass killing, it also has a very specific meaning that sets it apart from other core international crimes. This is the existence of a special intent ‘to destroy national, ethnic, racial or religious groups in whole or in part as such’. This means that not every crime – even the most heinous – automatically amounts to genocide. This genocidal intent also makes proving this crime particularly challenging for law enforcement. At the same time, genocide does not refer only to mass atrocities or causing of ‘serious bodily or mental harm’. Creating ‘conditions of life’ that assist in the destruction of the above-defined protected groups or the forcible transferring of children from one group of people to another, if done with the special intent of destruction of this group, could also be a characteristic of the crime of genocide.

Crimes committed are systematic and widespread, patterns particular to genocide

The deliberate targeting of civilians and civilian objectives as a method of warfare, sadly, is not an uncommon feature of Russian military doctrine. The world has witnessed devastating effects of this policy repeatably. The war throughout Ukraine has seen hospitals, schools, kindergartens and even theatres deliberately attacked and destroyed by Russian forces. The bombardment of the theatre in Mariupol, that served as a shelter and was clearly marked as such, resulted in close to 600 civilians being killed. Russian forces regularly shelled evacuation routes and convoys marked as civilian, systematically practiced torture and rape and engaged in summary executions, after which mass graves were discovered throughout the country.

What sets such acts apart from other international crimes committed in Ukraine or elsewhere is that they clearly demonstrate signs of a campaign of persecution against Ukrainians as a national group, targeting Ukrainian identity and Ukrainian statehood. Moreover, the crimes committed are systematic and widespread, which are patterns particular to genocide. In light of this, Ukrainian law enforcement authorities have launched a criminal investigation into the genocide. Here, I outline several aspects based on the facts and evidence gathered that, with reasonable certainty, allow us to deduce the existence of a genocidal policy on behalf of Russia.

The starting point is the very rhetoric of the Russian President who has, over the years, publicly and repeatedly questioned Ukrainian statehood. As early as 2008, President Putin told then-US President George W Bush: ‘Ukraine is not even a state. What is Ukraine? Part of its territories are in Eastern Europe, but the greater part is a gift from us.’ Similar sentiment is expressed in Putin’s 2021 essay ‘On the Historical Unity of Russians and Ukrainians’, where he argued that ‘true sovereignty of Ukraine is possible only in partnership with Russia’. So, he sees Ukraine’s sovereignty as dependent on Russia. This oration became even more intense and absurd directly before the full-fledged invasion. Accusations of Nazism served as a pretext for the Russian invasion. Hence, ‘de-Nazification’ and ‘de-militarisation’ were declared as the main objectives of Russia’s military mission in Ukraine.

In his address to the nation on 24 February, the Russian President once again raised his objection to Ukrainian statehood, noting that it was a creation of Bolsheviks. He explicitly stressed the ‘de-Ukrainianisation’ process, meaning the need to erase the very core of the consciousness of Ukrainians as defined and independent people and as a state. ‘There is no Ukraine. There is Ukrainian-ness. That is, a specific disorder of the mind.’ These were the words spoken within days of the invasion by Vladislav Surkov, Kremlin ideologue and former adviser to the Russian President. Dmitry Medvedev, Deputy Chairman of the Security Council of Russia and a former prime minister even called Ukrainian identity ‘one big fake’. This genocidal language of ‘de-Ukrainianisation’ – questioning the very existence of Ukrainian identity – was spread by Russia’s propaganda machine through mass media and regularly reiterated by leading political figures.

This comes very close to the denial of the right to existence of Ukrainians as a ‘national group’ and is an affirmation of the genocidal intent – the dolus specialis – under the Genocide Convention. On 12 April 2022, US President Joe Biden referred to Russian aggression as genocide, explaining that ‘it’s become clearer and clearer that Putin is just trying to wipe out the idea of even being able to be a Ukrainian’.

Russian soldiers on the ground became influenced by the increasingly aggressive calls for de-Ukrainianisation. There is considerable evidence showing the first signs of attacking Ukrainians as a group, starting in early March 2022. After the liberation of territories, evidence of atrocities started emerging. The commission of heinous crimes was also corroborated by victims and witnesses fleeing occupied territories.

One pattern that is common to all territories is that, wherever they entered, Russian forces have launched a full-scale search for pro-Ukrainian or anti-Russia residents and targeted them. They routinely gathered the male population of localities, either executing them on the spot or transporting them to ‘safe places’ where they were strip-searched for any visible signs of nationalistic tattoos or any such messages on personal phones and belongings. In Bucha, Russian forces went door to door, claiming they were ‘hunting Nazis’. They were picking out those perceived to be leaders or with an active pro-Ukrainian position and mistreating and/or executing them. Public officials and politically active citizens who dissented from denouncing Ukrainian-ness disappeared or were executed. We have accounts of Russian soldiers telling residents ‘we have orders to shoot’ or ‘we will exterminate everyone’. This is an open policy of erasing the very idea of Ukraine and Ukrainian identity. 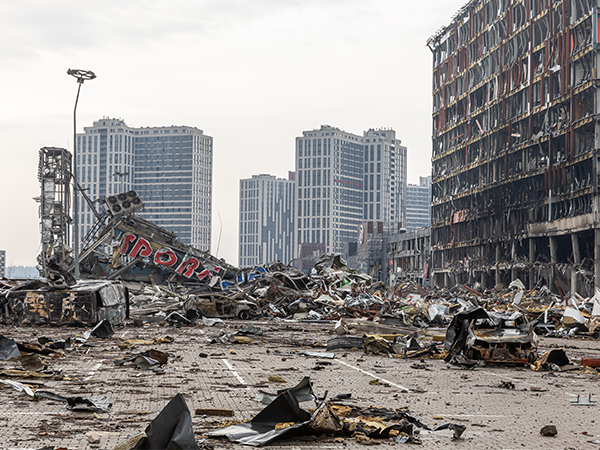 Beyond this, Russia displayed unprecedented violence against the civilian population. First, it was Bucha and other cities in the Kyiv region, where over 450 bodies were found. The majority of them having been tortured, shot or bludgeoned to death. Then it was Sumy, Chernihiv and Izium. Now Ukrainian law enforcement agencies are uncovering Russian barbarism in Kherson. In the majority of these territories, torture chambers with torture tools and traces of such treatment, places of summary executions and mass graves were found. This open and systematic violence is aimed at spreading fear and terror and eradicating resistance so Russians could remove Ukrainian identity.

While killing large numbers of a group may be the most direct means of destroying the group, genocide can also be committed by other acts that do not have an immediate result, such as forced displacement and sexual violence. Both these methods are used by Russia as weapons of war. Sexual violence has been used as a political and military tactic by Russian forces to show unbounded violence with the aim of humiliating and breaking the civilian population.

De-occupation of cities and towns yielded insight into the scale of the perpetrated sexual violence. For the time being, there is mounting evidence confirming that in all the territories that temporarily fell into the hands of the Russians, women and even children were subjected to different forms of sexual violence. Many were raped or gangraped for days and many others killed afterwards. We have records that mothers were repeatedly raped in front of their children and juveniles were forced into sexual intercourse, with parents present. These facts are acknowledged by independent reports, including by the UN Human Rights Monitoring Mission to Ukraine. We also have documented instances of the bodies of women and young girls raped, partially burnt and left in houses or in streets.

Another genocidal policy perpetrated by Russia is one of forced deportation of Ukrainian children and their adoption in Russia. This is a well-planned strategy of separating children from their parents and families, even abducting them from Ukrainian boarding schools and hospitals, forcibly deporting them to Russia and putting them through the adoption process. The same is true in relation to children who were orphaned as a result of the war.

The Russian President has promoted the quick assimilation of these children into Russian society. He adopted a decree simplifying the process of applying for citizenship for orphans and children left without parental care from Ukraine, facilitating the adoption of children by Russian families and further complicating their return to Ukraine. This is ‘[f]orcibly transferring children of the group to another group’, which under the Genocide Convention is an act of genocide.

Russia’s activities show clear signs of the creation of such ‘conditions of life’ that assist in the destruction of Ukrainians as a group, including targeting power plants and electricity grids, causing significant fluctuations in supplies. This is especially alarming in light of the onset of winter, when millions are being left without electricity, heating and gas. This is done yet again to sow terror and intimidation in the population. Russian forces also aim at transport and communication sources as well as medical facilities. In March, Russian forces bombed a maternity and children’s hospital in Mariupol. In April, the railway station in the city of Kramatorsk was bombed, right when civilians, including children and the elderly, were trying to leave for safer parts of the country. Destruction of cultural sites closely linked to Ukrainian identity and statehood is another pattern displayed by the Russian military. According to UNESCO estimates, over 120 cultural and historic sites have been damaged and destroyed since 24 February.

These actions have nothing to do with waging war under the rules of international humanitarian law. They depict a clear line of persecutorial policy often accompanied by acts of terror, torture and intimidation against Ukraine and Ukrainians. This is exemplified by the honouring of the 64th Separate Guards Motor Rifle Brigade by the Russian President, with the title of ‘Guards’ for defending ‘the Motherland and state interests’ and praising the ‘mass heroism and courage’ of its members. This is a military unit that occupied Bucha and was engaged in atrocities there.

Against this backdrop, the painful history of the World Wars of the 20th century showed that peace and stability can only be achieved when accountability is ensured and when justice is restored. Russia’s actions revive the worst memories of the last century by mocking international law and undermining the existing rules-based order. The international community cannot allow the essential foundations of a group with distinct national origin to be attacked with the intent to destroy it, and for its history and culture to be obliterated. If this is allowed, then the Genocide Convention has failed to achieve its objective. This is the declared objective of the Kremlin regarding Ukraine. Not acknowledging the fact does not make it disappear, it just gives time and space for evil to strike again, and harder. This must not be permitted.

Image credit: Andriy Kostin, the Office of the General Prosecutor of Ukraine