A dispute before the Supreme Court of England and Wales has prompted calls to grant abuse victims legal aid to help address the glaring ‘inequality of arms’ perpetuated by the UK’s libel system.

This issue came sharply into focus in the recent Stocker v Stocker case heard in the Supreme Court. On 24 January, a panel of five justices considered whether to overturn a ruling that the former wife of a wealthy businessman should be held liable for defamation after she wrote the words ‘he tried to strangle me’ in a Facebook post directed at his new girlfriend.

During the hearing, Lord Reed, the current Deputy President of the Supreme Court, highlighted the ‘enormous’ legal costs facing the appellant and said the case called into question why it is ‘so expensive to litigate defamation cases in this jurisdiction.’ Mrs Stocker’s legal bill could reach £500,000, making the stakes extremely high if she fails in her appeal.

Where an abuser, or even an alleged abuser, is using libel laws effectively to silence…legal aid ought to be made available to the woman to defend herself


Legal aid is not normally available for libel claims and the UK government has only granted legal aid in exceptional circumstances. The requirement to consider exceptions followed the precedent-setting McLibel case (McDonald's Corporation v Steel & Morris), which reached the European Court of Human Rights in 2005. The Court found that the UK government, through denying two environmental activists the right to legal aid, had breached both Article 6 – the right to a fair trial – and Article 10 of the European Convention on Human Rights.

Mark Stephens, an IBA Human Rights Institute council member, acted for the ‘McLibel two’. He believes legal aid should be made available for victims of abuse fighting libel claims, as the power imbalance puts them at a similar disadvantage.

‘We saw that in the McLibel case for instance, where McDonald’s thought their wealth and power would be able to preclude legitimate criticism of them and their business practices,’ he says. ‘Where you have an inequality of arms through an inequality of wealth it means that the people who have money and power are able to silence those who don’t have that power and wealth. Where an abuser, or even an alleged abuser, is using libel laws effectively to silence and out, then those special circumstances do apply, and legal aid ought to be made available to the woman to defend herself.’

The #MeToo movement has galvanised global support for women to speak out against unedifying behaviour. Rosie Brighouse, a legal officer at civil liberties group Liberty, attended the Supreme Court hearing in January. She believes the case could deter many victims from coming forward to report abuse: ‘Without making any comment on the facts of the Stocker v Stocker case, Liberty is deeply concerned that the courts’ approach, in this and other cases, risks scaring victims of abuse into keeping silent about their experiences.’

As legal aid is increasingly scarce, Stephens, a media partner at Howard Kennedy in London, agrees the case exposes a systemic problem that the country’s libel system is weighted in favour of the rich and powerful. ‘It’s also not just a gender issue,’ he says. ‘There’s a wider problem that we see day-in, day-out in the libel courts of powerful people silencing people. It’s also important to say that most of these cases don’t get to court. It takes somebody with the perspicacity of Mrs Stocker to push this and take the case on and have the argument.’ 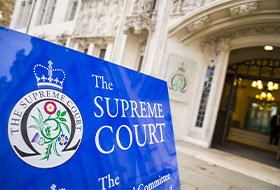 The issue facing the justices in the Stocker v Stocker case is whether the trial judge erred in interpreting the words ‘he tried to strangle me’ according to two dictionary definitions of ‘strangle’. Mr Justice Mitting suggested that Mrs Stocker’s use of the word ‘tried’ implied her husband had attempted to kill her. Mr Stocker, a property developer, told the High Court: ‘I'm not saying she is a liar, but I don't remember doing that. All I wanted her to do was, you know, stop shouting and saying the things she was saying.’


The judge found that Mr Stocker had ‘in temper’ attempted ‘to silence her forcibly’. However, he concluded that his ‘intention was to silence, not to kill’, thereby awarding Mr Stocker £5,000 in damages, which he did not take. Mrs Stocker was ordered to pay his legal costs, which were in the region of £200,000. She appealed against the order and the case was referred to the Supreme Court.

The justices are expected to reserve their decision on the case for several months. Pragna Patel is director of Southall Black Sisters, a UK charity that challenges gender-related violence against women. She says the case brings home the concern that the growing backlash against the #MeToo movement and failures in the legal system itself are stifling women’s ability to call out wealthy men who fall foul of the law. ‘Rich men are finding ways of defending themselves,’ she says. ‘Yet again, they are able to enjoy the benefit of the full armoury of defamation laws, non-disclosure agreements and emergency injunctions that are used to silence women. Is it time to add another dimension to the #MeToo movement to address this backlash?’

The UK Defamation Act 2013 introduced a new statutory requirement obliging claimants to demonstrate they have suffered ‘serious harm’ before bringing a defamation claim. The threshold was designed to strike a fairer balance between the right to freedom of expression and the protection of reputation, as well as put an end to the so-called ‘libel tourism’ clogging up the country’s courts. However, Patel believes the UK’s current libel laws are doing victims of domestic and sexual violence a disservice. ‘The media presents a key democratic space by which to ensure that long suppressed accounts of domestic and sexual violence and trauma surface and are taken seriously,’ she says. ‘Difficult though it may be, media space must be safeguarded, which means that we have to unsettle any attempts by men to use the law to silence women.’