In early April 2017, the IBAHRI facilitated a weeklong UN Human Rights Mechanisms training workshop in Geneva for six Syrian lawyers. In addition to completing the training, the lawyers participated in several advocacy meetings with representatives of permanent missions to the UN in Geneva. The training resulted in the development of an engagement strategy on UN human rights and accountability mechanisms that will form the basis of IBAHRI’s 2018-2019 project.

In 2018, the IBAHRI partnered with the International Legal Assistance Consortium (ILAC) on a project to strengthen the capacity of Syrian lawyers to engage with international and national human rights and accountability mechanisms. The project consists of a series of training and practical engagement activities to take place over the course of 2018 and 2019.

Between 2 and 12 July 2018, a group of 14 Syrian lawyers met in Sarajevo, Bosnia, to discuss how the Syrian legal community could coordinate its efforts in engaging with UN human rights mechanisms and accountability for crimes committed in Syria. 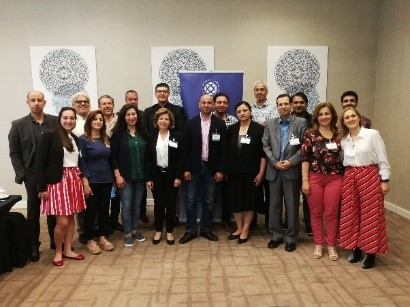 Week one commenced with the ‘training of trainers’ on human rights and UN mechanisms delivered by a team of three legal experts:

The training manual can be found here.

At the end of the week, the lawyers developed a strategy for coordinating their efforts to engage with UN mechanisms and identified four main human rights issues:

3. Women’s rights and gender based violence;

Week two commenced with training on international criminal law and procedure and universal jurisdiction delivered by a team of two legal experts:

The training manual can be found here.

After the training, the group developed a strategic plan for coordinating its efforts to bring to justice individuals responsible for the most atrocious crimes committed in the Syrian Arab Republic.

It was the first meeting of Syrian lawyers working on human rights violations and crimes committed in Syria to discuss effective and consistent coordination between Syrian legal professionals.

The Sarajevo Group comprised of representatives of various organisations and individual lawyers including:

The lawyers first participated in a series of training workshops organised by the IBAHRI (i.e. preparation of advocacy factsheets, oral statements, advocacy meetings).

They also met with several UN Special Procedures, the IIIM, the Commission of Inquiry of Syria and State missions.

On 11 September 2018, the IBAHRI also organised a side event ‘ Civil Society Organisations and Criminal Accountability for Atrocity Crimes’ with support of the Government of Canada. The panel discussion was dedicated to the role of civil society organisations in combating impunity by bringing to justice individuals who have committed atrocious crimes. The panel was closed by Mr. Mazen Darwish, Syrian lawyer, and Ms. Natacha Bracq, IBAHRI Programme Lawyer leading the Syria project.

Finally, on 12 September, Mouhanad Sharabati delivered an oral statement on behalf of the IBAHRI and the group of Syrian lawyers during the Interactive dialogue with the Working Group on Enforced Disappearances (Item 3). 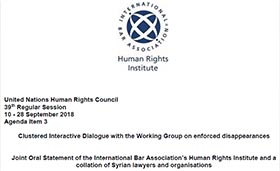