Women appeared to be all the rage at this year’s World Economic Forum (WEF) in Davos as an all-female panel chaired the summit for the first time in its 47-year history. However, the revelation that still only 21 per cent of this year’s attendees were women and reports that gender equality is declining across many industries painted a distinctly different picture.

The panel, which included IMF Managing Director Christine Lagarde, as well as businesswomen, a physicist, a social activist and a prime minister, was lauded as a bold attempt to increase female representation at the notoriously male-dominated event.

However, Angela Kane, a senior fellow at the Vienna Center for Disarmament and Non-Proliferation, who has spoken at the summit in the past, believes the WEF is still out of step with the rest of the business world.

‘The only change this time is that they made more of an effort to showcase women on panels,’ she says. ‘It is an economic forum and deals with economic issues primarily, but on the other hand there is a big disconnect, I feel, with what’s happening in the world and what they’re doing. If you look at economic topics, there are more CEOs that are men than women, but I still think that if you really look for women, you can find them.’

Kane left the UN in August 2015 after 38 years and told Global Insight shortly after retiring that she hoped to see a woman appointed as Secretary-General one day. Although women now hold 23 of the UN’s 44 most senior positions, Kane says it is a similar story of keeping up appearances. ‘It’s not only the numbers but also the types of jobs they have,’ she says. ‘And that simply is still not 50/50: the really good, plum political and peacekeeping jobs are held by men. The really important jobs in the organisation are not held by women.’ 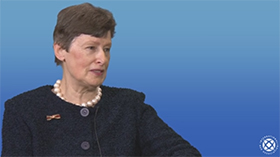 In November 2017 a WEF report found that the gender parity gap across health, education, politics and the workplace had increased for the first time since 2006 and a second report launched at this year’s Davos cited the growing gender inequality across male-dominated industries such as information technology and biotechnology.

Charandeep Kaur, a partner at Trilegal in New Delhi and Co-Chair of the IBA Women Lawyers' Interest Group, says although such reports are discouraging, it is important to focus on the positives. ‘I think we should look at the progress we have made in this area and draw out positive energy to gear ourselves for the challenges that still persist. The role that technology is playing across industries can’t be overlooked any longer and substantial steps need to be taken at the grass roots level to ensure we have support programmes for women.’

Charlotte Heiss, Group Chief Legal Officer and Company Secretary at RSA Insurance Group, who has made moves to increase diversity in her own business, says holding onto and promoting female talent is essential. ‘As lawyers we can play a role in ensuring diversity gets appropriate prominence with boards and we can also help design initiatives and policies for improving diversity and inclusion in our businesses,’ she says. ‘I am a believer that what gets measured gets done, so providing management with meaningful diversity reporting makes for great conversations.’

A recent report by the IBA’s Legal Policy and Research Unit found that women continue to face discrimination and obstacles to progression in law firms.

Kaur believes private practice is starting to adopt a more proactive approach to gender diversity: ‘What we are now seeing is a real sense of urgency in the profession to adopt best practices that nurture and sponsor women through the ranks to ensure gender diversity flows right to the top. Creating flexible workplaces, embedding diversity in the culture at all levels and a sense of responsibility in choosing businesses that demonstrate gender diversity are some of the steps that can have an immediate impact.’

Canadian Prime Minister Justin Trudeau’s speech urging delegates to do more to promote women's rights was warmly received at a time when global movements like #MeToo and #TimesUp continue to highlight sexual harassment and gender inequality in the workplace.

However, Isabel Bueno, a partner at Mattos Filho, Veiga Filho, Marrey Jr e Quiroga Advogados in São Paulo, stresses that support starts from the bottom up. ‘We believe that support for the global women's movement is fundamental; on the other hand, we believe that local efforts geared towards women addressing the specific issues of each context and culture are essential,’ she says. ‘Our firm supports, for example, the HeForShe campaign [initiated by] UN Women and, in parallel, works with local organisations to promote gender equality.’

Bueno, who also co-chairs the IBA Women Lawyers' Interest Group, says ensuring women have access to justice is vital to upholding their rights. ‘We understand that it is not useful having women rights guaranteed by law if they do not have access to justice. Therefore, we engage our lawyers and attorneys to defend clients who do not have sufficient resources to pay for legal services or seek rights in the Judiciary.’

The presence of US President Donald Trump, who has attracted strong criticism amongst women’s rights’ groups at home, divided opinion at the summit. He and other world leaders such as Indian Prime Minister Narendra Modi and Brazilian President Michel Temer remained noticeably quiet on the topic of gender parity.

Both Kaura and Bueno say there has been progress in their countries. ‘In India, we are seeing incremental progress by way of policy changes that are slowly but steadily helping in arresting the gap,’ says Kaur. ‘These include the Maternity Benefits Programme, the Sexual Harassment of Women at Workplace Act, the Beti Bachao Beti Padhao women protection and women education programme and a statutory provision making it mandatory [for some companies] to appoint at least one female director on the Board.’

‘Brazil is focused on adopting solutions and reforms to improve our economic situation,’ adds Bueno. ‘Maybe the gender gap is not a priority yet. Let’s hope international authorities and institutions can further the discussion around the topic in their agendas soon.’