The people will be ready: experiencing LGBTQ+ activism in Paraguay

Back to LGBTI Committee publications

When I mentioned that I was going to Paraguay, people responded with quizzical looks. Some people have an idea where Paraguay is, but few know anything meaningful about it. The country receives little attention on the world stage, partially because it’s bordered by Brazil and Argentina, two behemoths that dominate whatever attention the region receives.

I have been a frontline LGBTQ+ family lawyer in New Jersey for nearly 50 years. Many of us front-line LGBTQ+ family lawyers work in isolated and hostile places. Often, we are the only resource for our clients. For the last decade, I have been working on linking and organising LGBTQ+ family lawyers around the world to build a storehouse of knowledge and experience and to provide a community of support. Wherever I travel, I seek out local LGBTQ+ activists and lawyers. This report is meant to share some optimism and hope for the courageous activists fighting worldwide for equality and justice.

Why did I decide to visit Paraguay?

In March, I was going to a meeting of Latin American LGBTQ+ lawyers in Argentina. Paraguay is nearby and certainly qualifies as an isolated and hostile environment for LGBTQ+ rights. I was intrigued. I planned a short trip to Asunción, its capital, to see what I could learn.

I had few notions about what I would find. I knew that Paraguay was among the poorest countries in South America and an agrarian economy, where more than 90 per cent of the land is owned by a few people. Being a small society, people know their neighbours well.

I was aware that in the second half of the 20th century, a dominating, repressive dictator had increased the country’s seclusion, leaving a heritage from which Paraguay is still trying to escape. I knew that LGBTQ+ people had been persecuted and marginalised.

Although my time there was brief – just 36 hours – I came away besotted by Paraguay’s vibrant LGBTQ+ rights movement, far beyond my expectations. Horrible acts of violence and discrimination are perpetrated against the LGBTQ+ community every day, somewhere, in the developed world and in the developing world. What I saw, however, cheered me.

LGBTQ+ activists in Asunción showed me Aireana, the nation’s first lesbian organisation in Paraguay. Aireana is a friendly, well furnished, colourfully decorated building in the heart of the city.

Like LGBTQ+ centres in other parts of the world, it provides a variety of services and activities. Reflecting the needs of its local community, it offers services like a helpline, cultural events such as this year’s 15th annual LGBT film festival and political action, including working with the Organization of American States and the Inter-American Court for Human Rights to exert pressure on the Paraguayan Government.

I also visited SOMOSGAY, another LGBTQ+ centre in Asunción, founded in 2009. Despite unending opposition from five conservative governments since its inception, SOMOSGAY thrives. Its programmes include a health clinic and a drop-in centre in its equally colourful, well-appointed space. SOMOSGAY helps organise an annual Besaton (kiss-in) in a public square in front of Parliament and the annual Pride parade in Asunción. It produces many attractive publications, full of updated information about LGBTQ+ rights and issues like HIV.

Activists at Aireana answered my many questions with the assistance of an interpreter. At SOMOSGAY, Simon Cazal, the Executive Director, spoke fluent English. All of them provided me with a vivid history of the LGBTQ+ movement in Paraguay beginning in the mid-20th century.

The history of LGBTQ+ activism in Paraguay

In 1959, the government used the unsolved murder of a radio personality as a pretext to detain, torture and kill gay men. The first round-up included 108 men who were alleged to be gay. They were taken from their homes and tortured.

In 1992, Paraguay, with the introduction of a republican government, adopted an egalitarian, progressive Constitution. The activists I met stated that the challenge is getting the government to fulfil those constitutional promises. All types of institutions in Paraguay are still in development.

Status of LGBTQ+ people in Paraguay

My Paraguayan contacts reported that there is a general acceptance of LGBTQ+ people. They state that they are fighting ignorance, not hatred. The major roadblocks to equality are entrenched hierarchies.

Activist organisations, like Aireana and SOMOSGAY, confront attacks by politicians who use divisive tactics based on fear and lies. Television and other media provide the dominant right-wing clergy unlimited access to endorse these positions. The politicians and the clergy use the same playbook of attacks (paedophilia, recruitment, biblical injunctions) as developed and refuted in the United States. They agitate that there is a moral panic. Unfortunately, there are no consequences for their uncontested vitriol. The LGBTQ+ community is not given an equal ability or time to refute those claims.

During my meetings, I inquired about those issues that we as a community face wherever we live: legal recognition of our relationships, recognition of parentage rights, inheritance rights, LGBTQ+ homeless youth, trans, and gender non-binary concerns, and the challenges of being an LGBTQ+ senior.

Everywhere and every day, LGBTQ+ activists are fighting and advocating for these issues. LGBTQ+ Paraguayans have won some victories. There is social acceptance of people changing their names to align with their gender identity, but no equal government right to change official records. The national university’s ethics code protects sexual orientation, but not gender identity.

Despite multiple challenges, I was impressed with the passion, optimism, and tenacity of the activists I met.

Paraguay does have certain advantages. Unlike its neighbours, there is no religion in its Constitution. I was also told that there is little or no racism in Paraguay. Most people are descended from the indigenous Guaranis. Paraguay’s smaller size favours a more cohesive population. There is no anonymity. One does not get lost in a sea of differences, climates, regions, or customs spread over thousands of miles and multiple time zones.

Paraguayan activists report that the possibility of marriage equality remains distant. Same-gender couples will go to Argentina to get married, but their marriage holds no legal value in Paraguay.

Before I left, Simon and his husband Sergio Lopez (married in Argentina) took me to see a residence 40 minutes outside Asunción which SOMOSGAY has rehabilitated as a haven for homeless LGBTQ+ youth.

I was awestruck by what I saw. SOMOSGAY has taken an abandoned house and created an oasis for LGBTQ+ young people in need. The two-story residence is built around a central courtyard, in which there is a fountain decorated with 108 tiles. The courtyard’s support columns are painted in vibrant rainbow colours. Plenty of attention to detail went into the restoration. This residence rivals anything that I have seen elsewhere.

When I visited, five teenagers were living with a chaperone. It’s fairly common for young LGBTQ+, particularly trans, youth to be rejected by their families and kicked out of the home. More strict parents will lock non-conforming children in their house, isolating them from the outside world. Outside this residence, there’s no available housing for homeless LGBTQ+ youth.

While at first, the local community had reservations about the residence, after seeing how the property has been treated and improved, the community was won over.

What I saw in Paraguay – the organisations, their programmes, their materials – are world-class, competing with the best anywhere. They are colleagues and warriors for equality and justice, just on a different battlefield.

I left Paraguay with a euphoric glow of optimism.

I mentioned to the activists whom I met that I might write something about the experience. I asked if there was a message they wanted to convey. Rosa Posa, a volunteer at Aireana, responded in a way I will never forget. She said, ‘Don’t be pitiful, people here and NGOs are working in spite of society. This is a grassroots operation. People will be ready; being grassroots will be a plus.’ 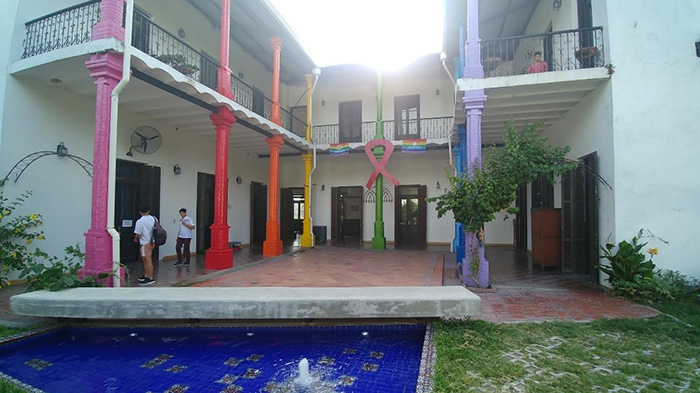