A conversation with… Mary Robinson

Mary Robinson served as President of Ireland from 1990 to 1997, becoming the first woman to hold the office. Widely regarded as a transformative figure for Ireland and the Irish presidency, Robinson revitalised and liberalised this political office. Following her presidency, she became the UN High Commissioner for Human Rights from 1997 to 2002. Her achievements since leaving this role include founding the Mary Robinson Foundation – Climate Justice in 2010. She spoke to former CNN correspondent Todd Benjamin.

Todd Benjamin: With the arrival of the Biden administration in the United States, realistically can it make a difference? The US is no longer seen as a leader. We no longer live in a multilateral world. There's a lot of distrust of institutions and there's a lot more ‘me first’.

Mary Robinson: I look forward to working with this strong and successful organisation. I'm going to be standing on a platform built by really competent leaders.

There is a recognition that it's different now from the time of the Paris Agreement in 2015. There is a sense of loss of American leadership. And it depends on how well the Biden-Harris administration can come in with the right tone, not assuming that they have a natural leadership role, because actually that has been set back, but coming back in a more humble way to work with other countries.

How does the US fit back into that? Biden has committed on the first day to go back into the Paris Agreement. But the tone will have to be right, to fit in with a world that wants to move forward rapidly and where business particularly – except the fossil fuel industry – wants to move extremely rapidly because they see how short the time is to get to a safe world for the future. 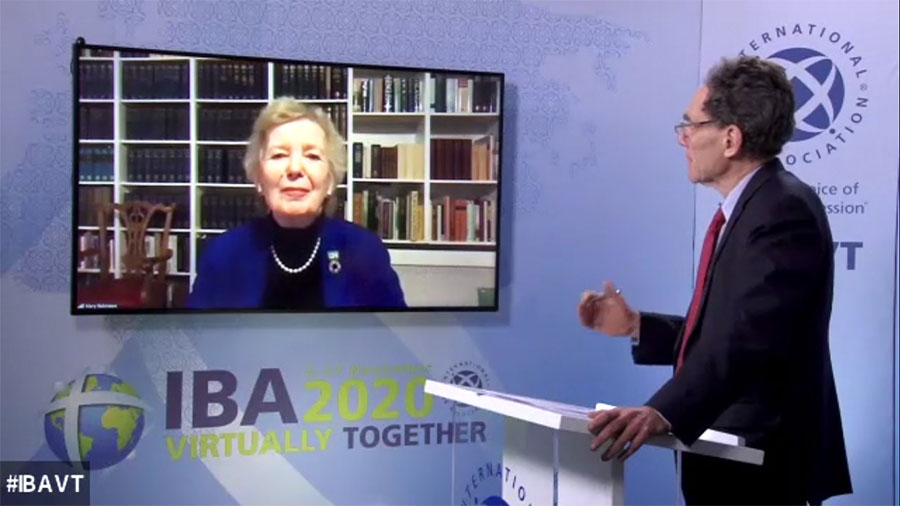 TB: What's interesting is if you look at the rapidity with which we have found a Covid-19 vaccine, and then look at climate change, there doesn't seem to be the same sense of urgency.

MR:Covid-19 has taught us that collective human behaviour can actually matter. It's the only thing protecting us from the virus in the absence of the vaccine and the better we behave in social distancing for example, the more we will save ourselves. That's a good lesson on collective behaviour about changing our consumption and our production habits for a time of crisis.

We are seeing with raw nakedness that governments that govern well are protecting their people and are helping our economies to come out more quickly.

It's good that we see governments and administrators listening to the health experts. We have to do exactly the same thing with climate scientists: really listen to them. Another thing is that compassion matters. We're seeing people caring about those less well off, caring about those who are going hungry. This is developing an empathy across communities in a way that is very helpful to get solidarity.

The final thing is, when it really matters, money becomes available. Look at the stability funds that are available when they need to be. Therefore, I have a sense that we need to be courageous coming out of Covid-19. Yes, it put a hole in our economies and it's very serious. The borrowing is enormous for the developed world. But actually, we need to borrow more for this transition, to be able to do the transition we need to do, because what are we doing? We're borrowing our children and our grandchildren’s money to give them a safe future by being able to afford this transition rapidly into clean jobs, clean energy and a healthier environment, and so on. But developing countries don't have that money and they're going to need special drawing rights of the International Monetary Fund, debt forgiveness on a significant scale and investment in clean energy.

TB: More fund managers are using environmental, social and governance (ESG) metrics in terms of where they invest. How effective do you think this is?

MR: This is the beginning of a very good development. The ESG standards that businesses are now beginning to have need to be strengthened. Especially the social part, which is probably the weakest part at the moment.

TB: Is international law the way to enforce addressing climate change, or are more informal enforcement systems between states a better option?

MR: What we have at the moment is the more informal system, but we're going to need more globally accepted standards to measure what is happening and to put a price on carbon, but also standardising ESG standards – they need to be toughened so that we make more progress and we do it on a more even playing field.

The EU has said that it will reduce emissions by at least 55 per cent by 2030. That's a good standard – let's make that the global standard

We don't have a way of legislating internationally on this. So, it’s cooperation between countries, it's peer pressure between countries that got us the Paris Agreement, that now has to get us a very ambitious UN Climate Change Conference in Glasgow next November, where countries commit to strong targets by 2030 in their nationally determined contributions. The EU has said that it will reduce emissions by at least 55 per cent by 2030. That's a good standard – let's make that the global standard. Then we would really be on track to a safer world.

This is an abridged version of a longer interview, which is available on the IBA website:
ibanet.org.