In an open letter to His Excellency Ayatollah Ali Hosseini Khamenei, Supreme Leader of the Islamic Republic of Iran, the International Bar Association’s Human Rights Institute (IBAHRI) expresses deep concern over the general situation of defence lawyers in Iran; the sentencing of human rights lawyer Nasrin Sotoudeh to 33 years’ imprisonment and 148 lashes; and the continued detention of human rights lawyer Amirsalar Davoodi. 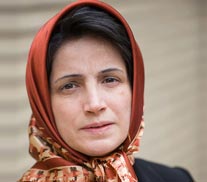 In relation to the sentence passed on Mrs Sotoudeh, IBAHRI Co-Chair, The Hon Michael Kirby AC CMG, commented: ‘This is a truly shocking and grossly disproportionate sentence, even in the context of Iran’s practices. Especially concerning is the serious discrepancy between the announced sentence and the sentence later revealed as imposed. It is not only an affront to the lawyer involved and her human and professional rights and duties; it is also an assault on legal professional organisation in Iran and worldwide, which is an essential precondition to the rule of law. Where is the evidence of the compassion and mercy of law in Iran? The world must observe, protest and remember.’

Prominent human rights lawyer Mrs Sotoudeh is an outspoken opponent of the death penalty and has represented several women arrested for peacefully protesting the compulsory hijab law – the mandatory wearing of headscarves. Initially, the Islamic Republic News Agency reported that Judge Mohammad Moghiseh informed journalists that Mrs Sotoudeh had been sentenced to seven years in prison. It later transpired that Judge Moghiseh used his discretion under Article 134 of Iran’s Penal Code to impose a higher than normal sentence of 33 years’ imprisonment and 148 lashes. This sentence, in addition to the five-year prison sentence Mrs Sotoudeh received in absentia in September 2016 in a separate case, brings her total prison sentence to 38 years – the most severe sentence recorded against a lawyer or human rights defender in Iran in recent years.

Anne Ramberg Dr jur hc, IBAHRI Co-Chair, commented: ‘The charges against, as well as the disproportionate and outrageous conviction of, Mrs Sotoudeh stem solely from her peaceful human rights work, including her defence of women protesting Iran’s forced hijab law, and her outspoken opposition to the death penalty. The Iranian authorities denied her the right to choose her own lawyer, violating the international standards of due process rights, and now they want to subject her to the odious practice of flogging, which constitutes torture and cruel and inhuman punishment. Mrs Sotoudeh is a symbol of courage, defending human rights in her country. We demand her immediate release.’

The IBAHRI draws the Iranian authorities’ attention to the prohibition against arbitrary arrests and detentions, as well as torture, cruel, inhuman and degrading treatment contained in the International Covenant on Civil and Political Rights (ICCPR), to which the Islamic Republic of Iran is a party. Also, ICCPR Article 9(1) mandates that anyone arrested shall be promptly informed of any charges made against them at the time of arrest. In addition, ICCPR Article 14 guarantees fair trial rights, including that a person charged with a crime has the ability to communicate with legal assistance of their own choosing. The United Nations Human Rights Committee also states that flogging, which constitutes cruel, inhuman and degrading punishment, is prohibited.

In the open letter, the IBAHRI urges Iran’s Supreme Leader to ensure adherence to international human rights laws and principles, particularly the international legal instruments that safeguard the independence of legal professionals, and to release Mrs Sotoudeh without delay.