‘Law and lawyers will have a vital role to play in securing climate justice. The Model Statute will stimulate lawyers to think about their important ethical roles in protecting this fragile world.’

An unprecedented step forward to provide citizens around the world with a critical new tool to address the climate emergency and achieve climate change justice will be launched by the International Bar Association (IBA) Climate Change Justice and Human Rights Task Force on Tuesday 18 February at Doughty Street Chambers in London, United Kingdom. The Model Statute is available to download for free from the IBA website.

The Model Statute for Proceedings Challenging Government Failure to Act on Climate Change (the Model Statute) is the first of its kind. Based on advice from leading experts, it provides detailed rationales, precedents and 23 specific Articles for reforms which will enable citizens to ask for judicial review of the sufficiency of their government’s climate measures and, where these are lacking, to assess whether more government measures are warranted under domestic laws. It is important to note that the Model Statute does not address climate suits against private entities, as these involve distinct legal theories and defences.

David Estrin LSM, Co-Chair of the IBA Model Statute Expert Working Group, commented: ‘This Model Statute is intended to lower the procedural legal hurdles many citizens face when trying to access the courts. Building on recent successes and judicial reasoning, it highlights the role of litigation in setting requirements for governments to protect the public. The adoption of some or all of the Model Statute by judges, rules of court, policy-makers or legislatures will help ensure a critical and timely reduction in greenhouse gas emissions.’ 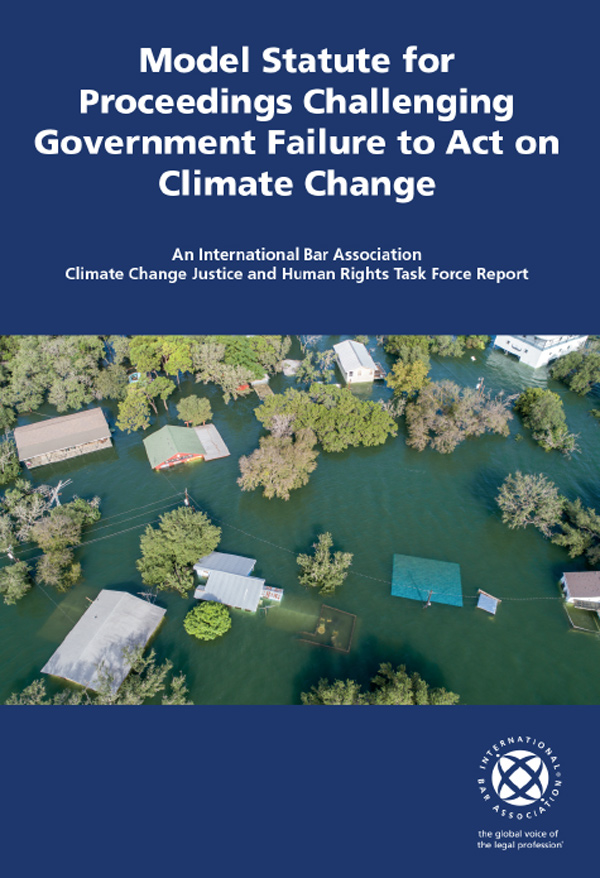 The Working Group recognised that despite some influential litigation successes, there remains many legal hurdles for citizens attempting to hold governments accountable for climate inaction. For example, in some cases, governments have argued that the climate crisis is a policy issue and therefore cannot be ruled upon by the courts. In other instances, procedural and legal hurdles, such as courts denying citizen standing to bring on the case, have led to their dismissal before the merits were argued; and other issues, such as litigation costs, which include lawyers’ fees, court fees and disbursements, can negatively ‘chill’ citizens from even trying to access courts. The Articles of the Model Statute, where adopted by courts or legislatures, would allow these hurdles to be lowered or eliminated.

Articles of the Model Statute include:

Roger Martella, Co-Chair of the IBA Model Statute Expert Working Group and former General Counsel of the United States Protection Agency (EPA) during the time of the Massachusetts v. EPA case, stated: ‘The law has a huge part to play in successfully addressing global climate change, but it is not always easy for citizens and communities to access their courts and assess government action, or the lack thereof. Simply put, this Model Statute levels the playing field. It provides much-needed process and access for government litigation to be heard, without prejudging the outcome of those cases under domestic laws.’

Over the past decade, and particularly since the adoption of the Paris Agreement by many nations in 2015, citizens have increasingly turned to litigation to prompt governments to take action on the climate emergency. In the 2006-2007 Massachusetts v EPA case, following petitioning from environmental groups and several states, the US Supreme Court determined that the EPA must consider whether to regulate GHGs and justify its decision. The landmark result ultimately led to US President Barack Obama’s administration creating new GHG regulations involving several sectors of industry.

The proposed legislation follows the IBA’s Task Force on Climate Change Justice and Human Rights landmark 2014 report, Achieving Justice and Human Rights in an Era of Climate Disruption, which identified the numerous legal hurdles facing citizens in climate litigation cases. Whilst the Articles are aimed at being adopted by legislatures and the courts, the introductory Commentary of the Model Statute Report is directed at those without any legal training or background to assist in a better understanding of the opportunities for citizen litigation challenging government climate action and inaction.