We, the undersigned 26 Bar Associations, Law Societies, and organisations supporting the legal profession of over 14 countries, stand in solidarity with our Iranian colleague Nasrin Sotoudeh and other lawyers in Iran who are being persecuted by their Government for carrying out their profession diligently and in accordance with the law.

On 13 June 2018, Ms Sotoudeh was arrested at her home in Tehran and taken to Evin prison. On 30 December 2018, she was tried in absentia and without access to a legal representative of her own choosing by the Revolutionary Court in Tehran on charges that included: 'assembly and collusion against national security;' 'propaganda against the state;' 'encouraging corruption and prostitution;' and 'appearing at the judiciary without Islamic hijab'. She was sentenced to 33 years in prison and 148 lashes. 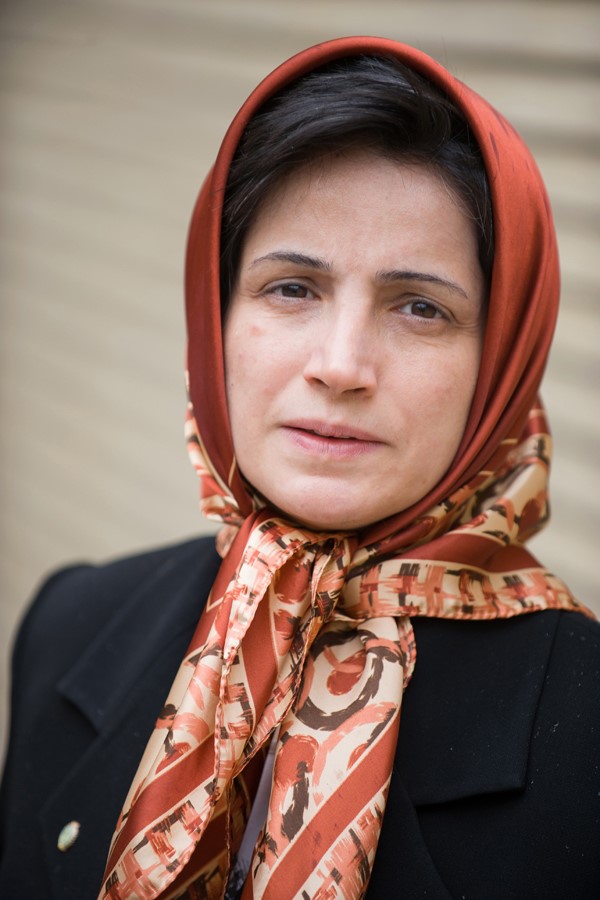 Previously, in September 2016, Ms Sotoudeh had also been sentenced in absentia to 5 years imprisonment without access to a legal representative. She was only informed of her conviction two years later. Prior to that, in 2010, Nasrin Sotoudeh was also convicted and sentenced to 11 years imprisonment, was banned from practising as a lawyer, and had a travel ban imposed on her. In September 2013, after 3 years in prison, Ms Sotoudeh was released.

These repeated legal proceedings brought against Ms Sotoudeh constitute judicial harassment and are in clear violation of Iran’s international legal obligations. It is evident that Nasrin Sotoudeh is being punished by Iranian authorities for carrying out her legitimate professional duties, in particular as a legal representative of women’s rights defenders, religious minorities, and minors at risk of receiving the death penalty. The actions taken against Nasrin Sotoudeh also deprive her clients of their right to access justice in Iran.

Earlier this year, the Islamic Republic of Iran temporarily released thousands of prisoners due to the Covid-19 pandemic. Overcrowding, lack of medical attention, and unsanitary prison conditions put prisoners at greater risk of contracting the virus. However, many human rights defenders and lawyers in Iran were excluded from the release and remain in detention.

Ms Sotoudeh began a hunger strike on 11 August 2020 in Evin prison to call for the release of prisoners held for political motives at risk of catching Covid-19. She was hospitalised due to her deteriorating health condition on 19 September 2020 and sent back to Evin prison on 23 September 2020 where she did not receive appropriate medical care. She ended her hunger strike on 25 September 2020 and was subsequently transferred to Qarchak prison on 20 October 2020. On 7 November 2020, she was temporarily released on house arrest on medical grounds. She has been suffering from low blood pressure, fluctuating blood sugar levels, and rapid weight loss and seems to have contracted Covid-19 in prison. On 1 December 2020, Ms Sotoudeh was sent back to Qarchak prison.

Iran ratified the International Covenant on Civil and Political Rights on 24 June 1975, which establishes binding obligations to respect and guarantee the right to be free from torture and ill-treatment, the right to liberty and security of the person, and the right to a fair trial. The UN Basic Principles on the Role of Lawyers establish that no lawyer should be hindered in carrying out his or her professional duties. Lawyers should be free to practise their profession and legally represent their clients without external interference and without being identified with their clients or their clients’ causes.

We call on the authorities in Iran to:

To watch/hear the 4th December 2020 panel discussion on the release of the documentary ‘NASRIN’, please click this link tinyurl.com/y32nlowf 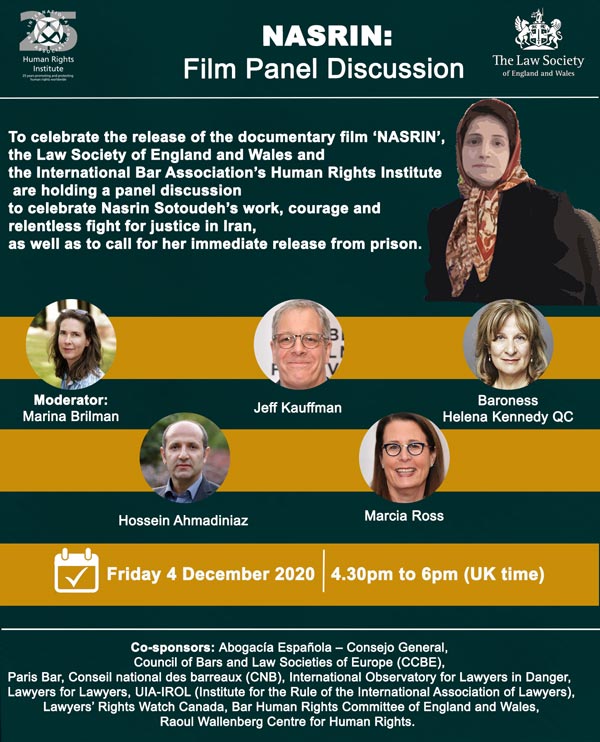