How a Professor of Islam was nicknamed ‘the Crucifix’

As Amena Nosseir works to change ‘contempt of religion’ laws in Egypt, her maverick reputation is starting a free speech debate across the Middle East.

Amena Nosseir, a member of the Egyptian parliament, has received a new unwelcome addition to her name. The 76-year-old Professor of Islamic Philosophy and History of Religion at Cairo’s Al-Azhar University, Egypt’s oldest and a bastion of Sunni Islam, is now disparagingly dubbed by her critics ‘Amena Nosseir the Crucifix’.

The moniker came after she submitted a bill to amend the country’s criminal code by scrapping a controversial article that criminalises ‘contempt of religion’, a move that instantly endeared her to secular activists and the country’s increasingly restless Christian Orthodox community – hence the crucifix slight.

Her plans, however, have unfurled a fierce debate as to which direction Islam will take in this country, with its 90 million population – and perhaps across the Middle East.

If passed, Nosseir’s bill will see the acquittal of Islam detractors, Christians convicted of disrespecting religion and writers who defamed Islam. Out of prison, critics say, they will be back to inciting prejudice and possibly inter-communal strife.

Nosseir says that ‘contempt of religion’ articles, passed in Egypt in the early 1980s, have been used to stifle freedom of expression, which she characterises as solidly enshrined in Islam. There will be a return to the true tolerant spirit of Islam, not to strife, she says.

IBA Human Rights Institute Council member Mark Stephens says the debate is reminiscent of similar controversies that have brewed internationally. ‘Those are fairly traditional methods of oppression,’ he says. ‘We see the use and abuse of these laws to effectively demonise and oppress people from minority religions or no belief at all.’

Stephens adds that the international community can too take measures to push for greater freedom of expression in Egypt and elsewhere. ‘The best way to deal with this matter is through the UN Special Rapporteur on freedom of expression, and in relation to freedom of religion the UN Human Rights Rapporteur. It would be a long list. Egypt will have some problems,’ he says. ‘Through the periodic review, the UN can have a fairly robust review of what it thinks of the matter. They can find that Egypt is in breach of international law as it would likely do in Bangladesh and Pakistan as well.’

Nosseir brandishes her credentials as a long-time Professor of Islamic Philosophy and History of Religion to defend her now contentious position. ‘The article to send to jail those convicted of contempt of religion hurts Islam,’ she says in an interview with Global Insight.‘Thought can be met only with thought, a pen with a pen and an argument with an argument. That clause in Article 98 contradicts freedom of thought and expression in general and in Islam in particular.’

She says the clause was introduced for political reasons, rather than on religious grounds. ‘Throughout Islamic history, there [has been] no such law criminalising freedom of thought or expression. It’s a modern thing aimed at quieting modern sectarian tension and is not grounded in our faith.’

She points to several examples from Islam’s main sources of legislation: the Qur’an, Prophet Mohammed’s traditions and the actions of early Muslims. One such example is a Qur’anic verse that addresses Prophet Mohammed, stating that his mission is only to deliver the message of Islam, and other verses that state human beings cannot be compelled into belief.

Egypt’s secular and Christian Orthodox activists have long accused the country’s religious establishment, particularly Al-Azhar University, of keeping the law in place to silence critics. So when Nosseir came up with the amendment, they quickly joined forces to form a bloc, both inside and outside parliament, to remove Article 98.

Nosseir and her allies fault the wording of the law as too general and elastic. She says this gives judges unreasonably broad authority of interpretation.

With a minimum penalty of six months and a maximum of five years in prison, plus a small financial fine of $100, the offence is defined as ‘contempt of one of the [three] divine religions or their communities, or of hurting national unity and societal peace’.

‘This is way too broad,’ Nosseir says. ‘One judge can acquit [the accused] under the same terms and another can easily send someone to prison for exactly the same offence. The wording is not restrictive. It is lax,’ she said.

Over the last year, two writers, Islam Behery and Fatima Naoot, albeit obscure, were convicted of the offence having built a reputation of being unrepentant and gleeful detractors of Islam. Now, Behery is serving a one-year jail term while Naoot is on the run in Canada. The cases catapulted both them and Article 98 into notoriety.

Nosseir recognises that Behery made ‘some mistakes’ against some pillars of Islam in his controversial TV show, which ran for a full year before it was pulled off air. She says a proper answer would have been to refute his allegations, not throwing him behind bars. ‘Behery may have now been turned into a permanent enemy of Islam as a result of the injustice done to him.’

But, despite her  arguments, Nosseir faces an uphill battle to change the law. She is taking on weighty opponents, including fellow legislators who say the bill is a recipe for turmoil at a time of instability in the country. 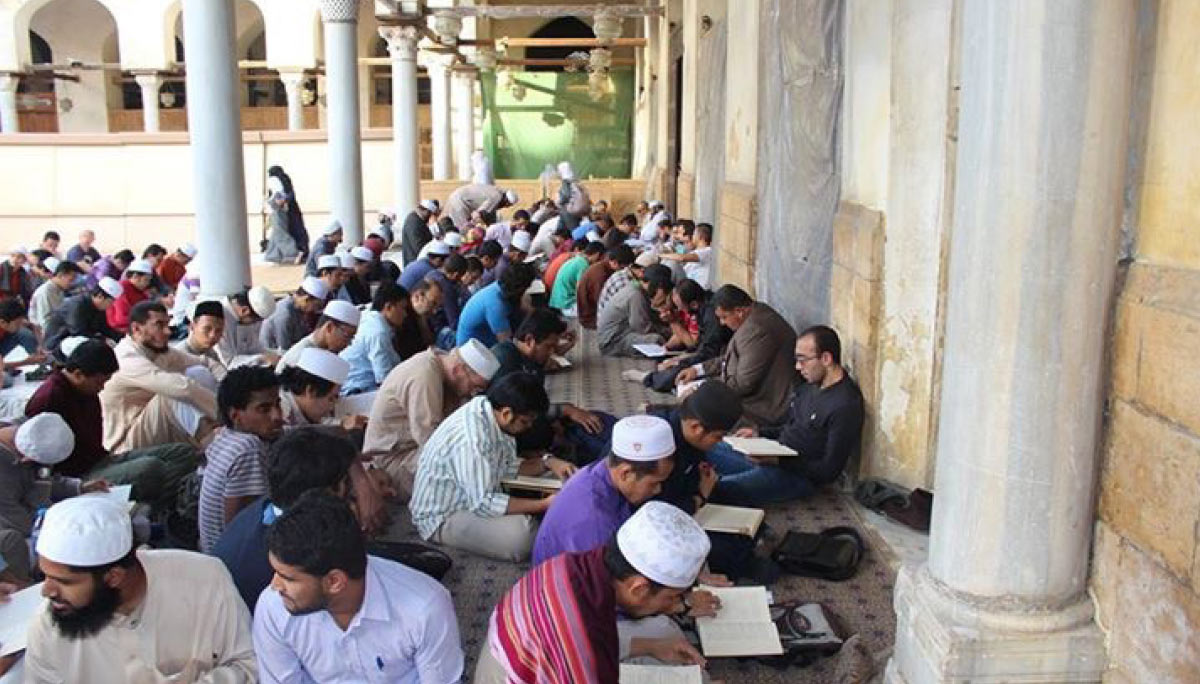 Local and international scholars from an April 2016 book reading event at Al-Azhar Mosque. The mosque was constructed in 972.

Nosseir doesn’t have the backing of the Religious Affairs Committee inside parliament or of the government even though she is part of Support Egypt, a pro-government
political coalition.

Last month, the Committee on Legislative and Constitutional Affairs devoted less than an hour to discuss the bill. ‘I barely managed to speak for four minutes,’ she said.
‘The right tone just wasn’t there’.

The spectre of a repeat of the infamous Christian-Muslim Cairo clashes of June 1981, when former President Anwar Sadat was in office, often comes up in conversation
about the law.

The country’s public memory is engraved with how troubles started back then: Orthodox Christians expressed disdain for the Muslim faith and Muslims countered by disputing land the Christians wanted to use for a church. The encounter turned bloody. Nine Christians and eight Muslims died.
Then President Sadat threw dozens into prison. He was assassinated a few months later.

Gaber Tayee of the Religious Endowments Ministry says that those who want to bury the ‘contempt of religion’ article may be agitating for a similarly chaotic scenario. ‘They are like a driver who wants to drive without traffic lights, signs or rules,’ he says. ‘That kind of driver wants to go anywhere, anyhow and any time without facing consequences. An iconoclast, who recklessly insults other people’s beliefs and ridicules their faith, often calls others who want to push back “intolerant of free expression”.’

Several Al-Azhar scholars along with the country’s Saudi-backed Salafists groups have seethed over Nosseir and her allies’ proposal. Instead of focusing on the many major challenges Egypt is facing, including the unprecedented economic meltdown, the Nosseir bloc is wasting resources on less than a handful of convictions that the public hardly noticed, they say.

Working too against Nosseir and her allies is her own mixed public record. Despite her academic achievements, she has cultivated an image as a maverick. In her short time in parliament, she introduced bills to recognise non-Abrahamic faiths and ‘non-believers’ such as atheists in the constitution without consulting with Al-Azhar. She was then overruled by the top echelons of the university who say they can only recognise divine religions (Christianity and Judaism) without denying others the right to practise.

Nosseir turned against her own Alma Mater and repeatedly asked for profound changes in Egypt’s Al-Azhar including abolishing affiliated schools and eliminating some textbooks from its curricula altogether. She alienated many otherwise supporting families when she said she would push for a hike in tuition fees at government schools – not an easy sell in a country with many struggling households.

She has spoken out against well-funded Saudi Wahhabi scholars as too rigid. Millions of expats from Egypt and other Muslim countries go to work in the oil-rich Gulf countries only to return more conservative, more ‘Wahhabi’ and less tolerant, she contends.

Nossier repeatedly criticised the Niqab, where a Muslim woman covers her face except her eyes, as a non-Islamic dress code. Nosseir, who wears a headscarf, says only covering a woman’s hair is sufficient.

Nosseir has shown an illiberal side too. After the public outcry over the near comical behaviour of some legislators during televised sessions – such as falling asleep or sitting intimately with fellow female legislators –  she called for a ban on airing parliamentary discussions and for less interaction with reporters; denying the public a view into the proceedings.

During the interview, despite her passion, Nosseir sounds unsure whether her ‘contempt of religion’ amendment will pass. ‘At least I tried,’ she says. ‘Religious establishments in general, including in Christianity and Judaism, are often intolerant of independent voices. They prefer the “yes, sir” people.

‘In my case, I say show me first your proof before I give you my yes.’

Emad Mekay is a freelance journalist. He can be contacted at emekay@stanford.edu