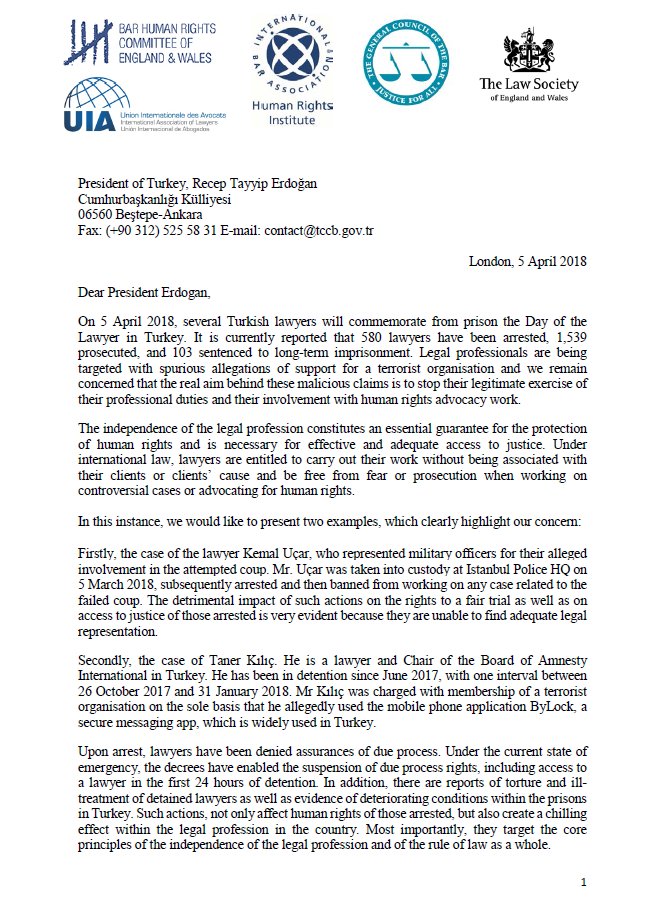 The joint letter was sent today in light of the Day of the Lawyer in Turkey and called for an end to the continued detention, prosecution and sentencing of legal professionals. The statement found concern with reports that at least 580 lawyers have been arrested, 1,539 prosecuted, and 103 sentenced to long-term imprisonment since the attempted coup in Turkey in July 2016. In particular, the organisations raised their concerns for lawyer Kemal Uçar who was recently arrested while representing military officers accused of involvement in the coup, and lawyer Taner Kiliç, chair of the Board of Amnesty International in Turkey, who has been detained since June 2017.

The organisations called upon the Turkish government to:

Andrew Walker QC, Chair of the Bar, said: “The independence of the legal profession is a cornerstone of the rule of law and effective access to justice. The continued detention, prosecution and dismissal of legal professionals in Turkey constitutes a serious threat to the individuals concerned, to their clients and to the rule of law itself.  Their ability freely to act for, and to defend the rights of, their clients is fundamental. This state of affairs cannot be ignored by those of us who play a role in protecting the independence of lawyers and the rule of law internationally. The Bar Council stands steadfastly alongside fellow lawyers’ associations in imploring the Turkish authorities to bring an end to these injustices.”

BHRC Chair Kirsty Brimelow QC said, “The continuing imprisonment of lawyers and Judges on spurious charges, in deteriorating conditions and with denial of basic rights to access to lawyers and family contact is a stain upon Turkey’s international standing. Patterns can be identified which show targeting of those who act in rights cases. The courts appeared to be too cowed or controlled to apply due process. Turkey must start to comply with the international law it has ratified and States need to do more to hold it to account.”

Pascal Maurer, Director General of the UIA-IROL (Institute for the Rule of Law), noted that“state of emergency and counterterrorism laws may be used by authorities as an alibi for detention and making arbitrary and unlawful arrests. In Turkey, lawyers too often are victims of the misuse of these laws that criminalise behaviours legitimately related to the defence of clients or to their human rights activities.  Vigilance, support and promoting the work of lawyers, as well as that of institutions and professions that are guardians of the rule of law in Turkey is of the utmost importance”.

IBAHRI Co-Chair the Hon Michael Kirby AC CMG commented: “Our concern extends not only to practising lawyers but to the prosecutors, judges and court officials who have been arrested in large numbers. These actions have produced dismay in the international community, far beyond the legal profession. They represent a significant apparent turning away from the principles of the rule of law which were so important in the program of modernisation and enlightenment introduced by the founder of modern Turkey, his Excellency Mustafa Kemal Ataturk.”

Tony Fisher, Chair of the Human Rights Committee of the Law Society of England and Wales said “the persecution of lawyers involved in rights related cases in Turkey pre-dates the attempted coup but the level of arrests and prosecutions has been steadily accelerating since July 2016. Many of the arrested and detained lawyers appear to have been targeted because they are acting for others who are themselves being prosecuted. This targeting of lawyers is a fundamental breach of Turkey’s international obligations to respect the role and independence of lawyers, as well as a breach of their rights as citizens.”

To read the open letter in full, click here.